In Gravesend, England, an unexpected visit by a whale has spurred beluga-themed swag in local shops. Photo by Chris Baraniuk

Graham Broadbent, manager of the tea shop Marie’s Emporium, eagerly holds up his last bag of Benny’s Tea—a special blend for a special whale. “It’s just cornflower to give a blue look. Because, the ocean,” he explains, pointing to the little dried petals among the tea leaves. “And then it’s got some licorice in there, which gives a slightly salty taste.”

The concoction was created in honor of a beluga whale nicknamed Benny who’s inexplicably taken up residence in the Thames, a 346-kilometer largely tidal river in southern England. No one can remember a beluga ever having come to the Thames before.

For nearly three months, the town of Gravesend has experienced what the locals call “Benny mania.” Broadbent’s shop and other local businesses have been quick to capitalize on the beluga’s sojourn. A woman who runs Forget-Me-Not Vintage, a craft shop, tells me she has sold 400 Benny-themed Christmas cards. Just a few remain in stock. And, despite trying, I fail to taste a specially brewed Benny beer at a local pub called the Ship and Lobster. The proprietor apologizes—she’s sold out.

It all began on September 25, when local ornithologist Dave Andrews spotted the whale while birdwatching. He captured the cetacean on camera and tweeted a video. A pale sliver—the beluga’s back—is seen breaking the gray surface of the Thames. A few moments later, the puff of the whale’s exhalation is clearly visible.

Can't believe I'm writing this, no joke – BELUGA in the Thames off Coalhouse Fort @RareBirdAlertUK pic.twitter.com/6VtrJ1PVc6

The tweet went viral and sent the British press into a frenzy.

A horde of journalists assembled on the riverbank near Gravesend that afternoon. A helicopter circled above, streaming live footage to the nation. I was one of many who watched, astounded, as the unmistakable white whale, its tail clearly visible, swam and dove in the river.

But Benny’s was not a fleeting visit—the whale has stuck around the Gravesend area and was spotted most recently on December 12. Benny—whose sex and age are unknown—has charmed many locals. However, some fear for how the beluga, an Arctic species, will fare over time.

Seeing any whale in the Thames is unusual—never mind one that has traveled thousands of kilometers from its Arctic home, says Katrin Lohrengel, monitoring officer at Sea Watch Foundation. “Getting belugas in the UK is really uncommon.” There’s never been a British sighting as far south as the Thames she says. Usually, belugas stick to the northern waters of Canada, Scandinavia, and Russia.

From observations of the whale, Lohrengel says it appears to be feeding frequently and is not obviously in ill health. Belugas are not fussy eaters, and there’s a wealth of fish in the Thames, including much flounder and whiting.

But the Thames is not just full of fish—it’s also full of ships.

The river “is like Heathrow Airport,” says Martin Garside, spokesperson for the Port of London Authority (PLA), the organization that monitors shipping up and down a 150-kilometer stretch of the Thames. Nearly 11,000 vessels visit the Thames every year and all this coming and going is a major driver of London’s economy.

Garside was on duty in 2006 when a northern bottlenose whale swam as far as the Houses of Parliament, much farther up the Thames than Benny has gone to date. Sadly, the bottlenose—a species that dives deep to find food such as squid—was starved and later died of dehydration. Garside remembers the necropsy. “It hadn’t eaten for a long time,” he recalls. 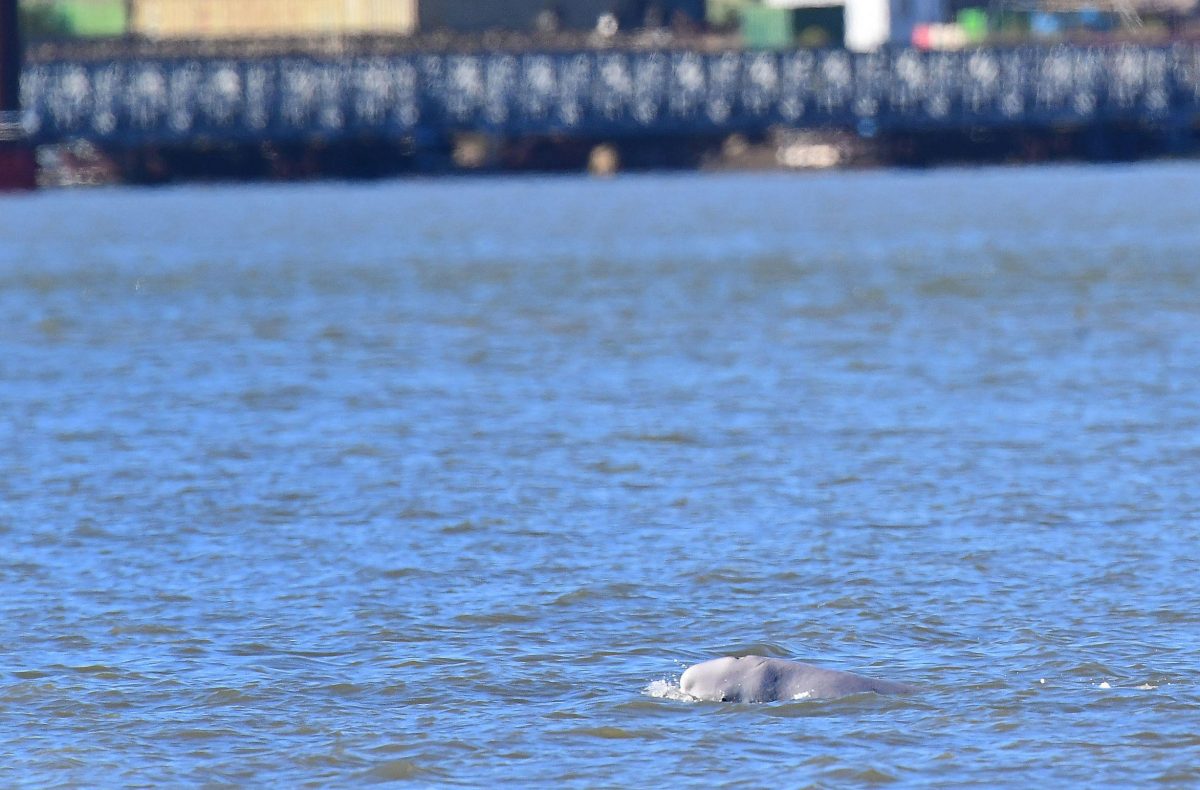 As of Christmas Day, Benny the beluga will have been swimming and feeding in the Thames for three months, sharing the waterway with thousands of ships. Photo by PA Images/Alamy Stock Photo

That’s why Garside, who went out on a patrol boat the day Benny was first spotted, was filled with a mixture of amazement and concern when the saw the beluga just three or four meters away. Benny, he says, is at risk here.

However, Garside has been encouraged by two things. Firstly, the whale’s tenaciousness. It obviously has “situational awareness,” he says, because otherwise it would have become stranded or famished pretty quickly. And secondly, the positive response of the townsfolk.

The council started a social media campaign, #KeepBennySafe, as part of an effort to explain its decision to cancel its annual fireworks display in November. The fireworks are usually launched from a barge in the river—something that could have been distressing for a beluga whale far from home. Initially, the council worried that the move would irritate fans of the event, but the public response was positive.

Since Benny has stuck around, the hashtag has too, and local authorities continue to encourage people to be mindful of the whale and give it lots of space if they’re out on the water.

One man I meet by Gravesend’s 800-year-old Borough Market is keen to tell me about how he saw the whale for himself and got a photo for his grandson. But he is also worried that people may use small boats to try and view the whale, which could cause the animal stress.

Broadbent and his staff at the tea shop have been thinking about marine conservation, too. They’re trying to reduce plastics at the shop. This has meant starting a refill system where customers reuse tins or bring their own containers when buying more tea, for example. They are now considering how to replace plastic-lined tea packaging as well. Benny coming to town has made the effort seem all the more worthwhile.

Everyone is hoping that Benny continues to thrive, but Garside is blunt about how he would prefer things to conclude. “I want him to swim home tomorrow,” he says from the control room of the port authority building, where a small team pores over live charts tracking every large vessel in the nearby portion of the Thames. Occasionally, the PLA has broadcast messages from here to ships, warning captains to be mindful of the beluga.

While Garside worries for Benny, he admits his heart has been warmed by the sight of kids pulling their parents along to the waterside in the hope of glimpsing the whale. Who could fail to be touched by that?

As Garside puts it, “You’d have to be the most Scrooge-like misery.”