Shifting fish distributions have made it difficult for African penguins living on southern Africa’s west coast to find food. Scientists are trying to get the penguins to take up a new home in the De Hoop Nature Reserve on South Africa’s south coast. Photo by Chris and Monique Fallows/Minden Pictures

Harsh honking fills the acrid air as hundreds of African penguins waddle clumsily over a rocky shore. A few pause to greet new neighbors. But the newcomers stay silent and still. They’re made of cement.

These birds are decoys, part of a plan hatched by Christina Hagen and fellow seabird conservationists at BirdLife South Africa to entice endangered African penguins to start a new colony near better fishing grounds. The group is testing the decoys at Stony Point, a rare mainland colony for the island-nesting penguins where the proximity of the nearby town of Betty’s Bay helps keep predators away.

“I think we fooled them,” says Hagen, back at her office. “We definitely fooled some of the tourists.”

African penguins have had a terrible century. In the early 1900s their population numbered in the millions. But egg collectors claimed half a million eggs a year back in the 1920s, then guano harvesters mined the penguins’ island colonies for their nutrient-rich poop. Without the guano layer, the birds couldn’t excavate nesting burrows, leaving eggs and chicks exposed to the elements and to predators. Now, the birds are down to just 25,000 breeding pairs split between colonies on the west coasts of Namibia and South Africa, and far to the southeast in Algoa Bay, South Africa.

These west coast penguins, such as those living near Gansbaai, South Africa, can’t simply follow the fish because they’re unable to make the 600-kilometer trip to Algoa Bay. As a consequence, many of the large west coast penguin colonies have decreased drastically, Hagen says. With nearly half of what remains of the African penguin population now concentrated in Algoa Bay, the species is vulnerable to localized disasters such as oil spills.

As an insurance policy, Hagen and her team is trying to trick penguins from the west coast into adopting new territory where fish are more plentiful. But getting penguins to establish a new colony is not as simple as relocating a few birds and hoping for the best. “Penguins are colonial breeders,” Hagen says. “So we basically want to trick them into thinking there are already penguins at the site.” Hence the cement penguin decoys, first tested in Stony Point and soon to be deployed at the new colony site.

African penguins are concentrated in two main areas: on the west coast of southern Africa, and on the southern coast near Algoa Bay, South Africa. Researchers are hoping that penguins will travel from west coast colonies, such as the one near Gansbaai, to a new territory in the De Hoop Nature Reserve. Illustration by Mark Garrison

“We chose De Hoop Nature Reserve because penguins tried to establish a colony there naturally in the 2000s,” Hagen says. Those early colonizers were killed by predators, she adds, but satellite tracking data shows that some birds from west coast colonies still venture to the region on occasion.

At first, the team will try passive social attraction to entice penguins to De Hoop—the cement decoys, but also speakers set up to play what Hagen describes as the birds’ “lovely braying donkey calls.”

Peter Ryan, an ornithologist at the University of Cape Town who is not involved in the project, says it’s encouraging that De Hoop has been colonized previously, although it’s a lottery as to whether the penguins will arrive in sufficient numbers, and whether they’ll stay. The new colony needs to attract young birds that haven’t yet selected a breeding site, Ryan says. Adults are extremely faithful to their colony, and will return year after year to reunite with their mate.

“Adults will continue to breed in stupid locations,” says Ryan. “It’s very unusual for them to move.” This site loyalty was demonstrated in 2000, when authorities trucked more than 20,000 penguins to a site 800 kilometers away from their island home near Cape Town to save them from an oil spill. Satellite transmitters affixed to three of the birds—Peter, Percy, and Pamela—showed that they were back home within weeks. 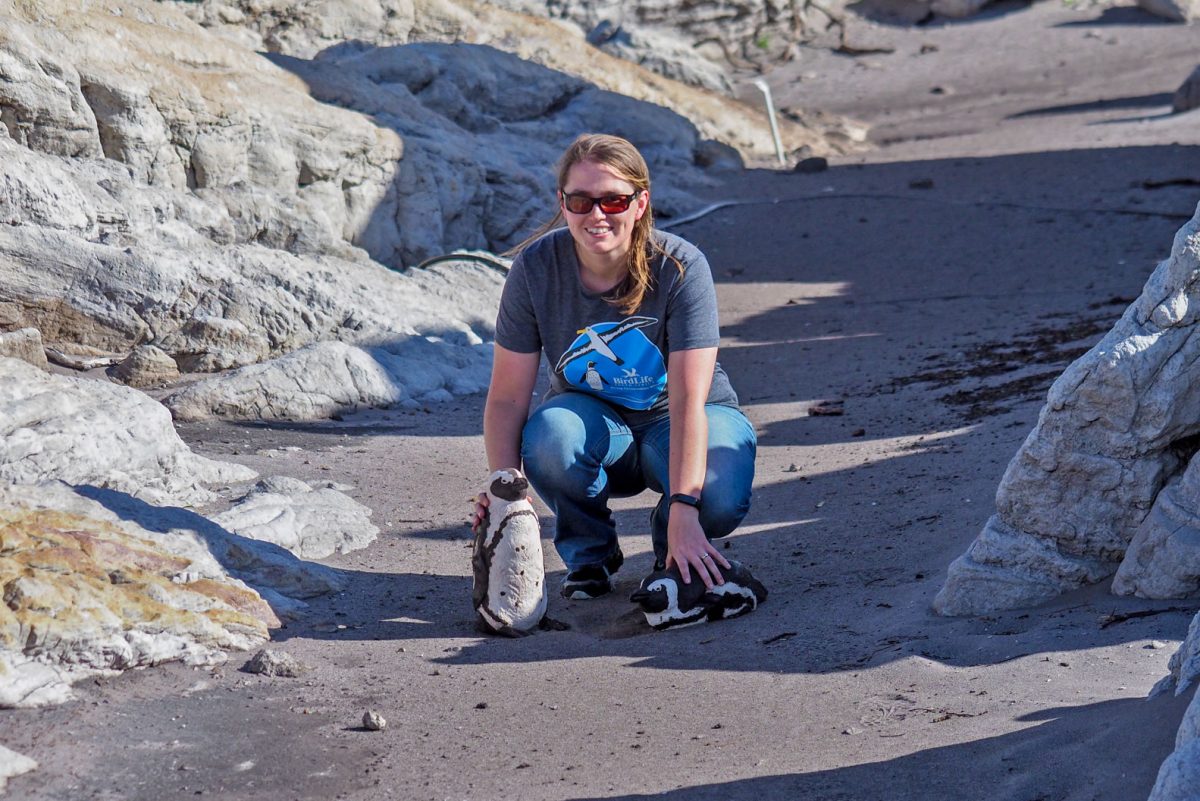 African penguins are colonial breeders, so they nest where other penguins already live. Researchers from BirdLife South Africa, including Christina Hagen, hope fake penguins made out of cement will fool real penguins into thinking the De Hoop Nature Reserve is a thriving colony. Photo by Roelf Daling

If the west coast penguins do adopt their new home at De Hoop Nature Reserve, a predator-proof fence will keep them safe from prowling leopards and caracals. The fence is a crucial part of the plan to prevent a repeat of the calamity that befell the original colony at the site, Hagen says.

Hagen says she and her colleagues are finalizing plans with the South African government. They expect to begin installing the fence and the decoys in the next few months.

Ryan cautions that if too few penguins adopt the new home, the colony’s small size might pose a challenge. “African penguins do flock foraging, where adults get together to herd fish. They’re much more successful in foraging groups than on their own. If you start with small numbers of birds, it’s harder for them to survive.”

Hagen is positive about her plan to coax penguins into adopting De Hoop as a new home. “Science tells us that it’s possible and there is a likelihood of success, but I can’t put a percentage on it,” she says. If the decoys don’t attract enough birds in the first year, Hagen plans to translocate newly fledged chicks to the site in hopes that they will return to breed at, by then, a truly thriving colony.