The Chesapeake Bay catches the runoff from an important agricultural region and has long suffered from poor water quality as a result. Photo by Edwin Remsberg/Alamy Stock Photo

These are just some of the words scientists scrawled on cocktail napkins at a dinner in July 2016 to describe the state of the seagrasses covering the bottom of the Chesapeake Bay.

“We all met at the Rams Head Tavern in Annapolis, and during the meal we created a word cloud by having everyone write down the first three words that came to mind,” says Bill Dennison, vice president of science application at the University of Maryland Center for Environmental Science. Dennison, a marine botanist, was leading an interdisciplinary group of about a dozen scientists, including ecologists, biologists, and oceanographers, who were analyzing the bay’s health. Over the past several decades, the US government has poured billions of dollars into cleaning up and restoring the bay. Dennison and his colleagues had come together to answer a seemingly basic, yet distressingly difficult, question: has it made a difference?

Now, two years after that meeting, and after crunching reams of data, the team can say with confidence: yes. But the Donald Trump administration has tried for the past two years to cut funding to the restoration project. Can the gains last?

The Chesapeake Bay is a poster child for environmental degradation. The largest estuary in the United States, the Chesapeake catches the runoff from one of the country’s oldest farming districts. It has been barraged by decades of nutrient runoff from urban and agricultural waste, with outflows of nitrogen and phosphorous pollution stimulating light-blocking algal blooms that have choked the bay and annihilated thousands of hectares of underwater plants.

But the Chesapeake Bay is also the poster child for large-scale restoration efforts. As the bay’s health and economy tanked throughout the past century, concerned people rallied to save it. In 1983, government agencies linked up with academic institutions and NGOs to form the Chesapeake Bay Program (CBP). The mission was simple: work together to reduce nutrient and sediment runoff and track the progress.

CBP representatives worked with farmers and municipalities to reduce nutrient runoff. Wastewater treatment systems were upgraded, and oyster beds were restored to filter the bay. Improvements in air quality in the Ohio Valley, upstream of the bay, also took hold, leading to fewer nitrates entering the bay. 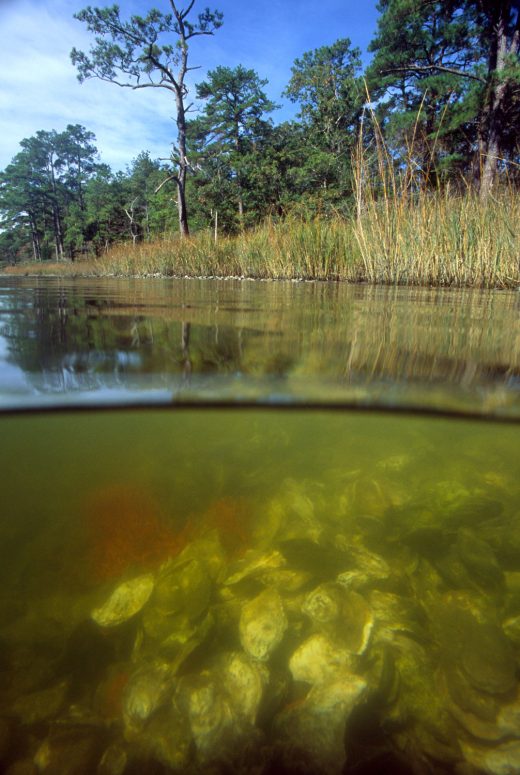 Efforts to improve water quality—such as reducing nutrient runoff and restoring oysters, which naturally filter the water—have done much to improve the Chesapeake. Photo by Aurora Photos/Alamy Stock Photo

It was a vast, complex, and expensive project plagued by intermittent cuts and politicking. In 2017 alone, more than US $26-million was pumped into the CBP to cover restoration and monitoring services, education and outreach, and operations.

That kind of overhead has made the program a regular target for federal funding cuts. In its 2019 budget recommendations, for instance, the US federal government proposed cutting funding to the CBP by 90 percent, reminiscent of a similar attempt to cut the funding in the 2018 budget. Both times, however, Congress thwarted the cuts—acts Dennison credits to “a lot of people who feel passionately about the bay.”

Congressman Scott Taylor, a Republican representative in Virginia, was among those who pushed to maintain the restoration program. “The Chesapeake Bay is the critical economic driver of our region, as well as a national treasure,” he said in a statement in March. “I took action on the committee to secure funding for bay restoration efforts because the president’s proposal would have zeroed-out the program.”

But future funding remains in question.

“I don’t have a good guess on next year,” Dennison says. “But I’m not optimistic, since it doesn’t seem to be a priority for the administration.”

For more than three decades, scientists have been measuring the changes in the bay in intricate detail. They’ve put together a rich dataset of water quality measurements, including temperature, salinity, turbidity, and nutrient levels, along with aerial photos of underwater grass coverage. It’s a big pile of data to digest, but through land-cover mapping and some fancy math, Dennison and the others who gathered two years ago at the Rams Head Tavern have shown not only how nutrient runoff was responsible for the degradation of the bay, but how specific management actions are linked to recent dramatic improvements in seagrass coverage.

According to a new report written by Dennison and his colleagues, the Chesapeake Bay is rebounding—in a big way.

Last year, the coverage of underwater grasses—the marine plants that undergird the vast bay ecosystem—reached the highest levels since record-keeping began. The coverage has been expanding for five years straight, Dennison says, and seagrasses now cover the equivalent of more than 100,000 football fields. Seagrasses are even showing up in spots where they haven’t been seen since the early 1970s.

“I used to swim down off of Solomons Island off the Maryland coast, and it was just a vast wasteland of muddy sand,” Dennison says. “But now there’s grass there for the first time in 45 years. It’s still a little patchy, but eventually it will be teeming with life as it thickens up and we’ll see the snails and crabs come back.”

The results are clear: nutrient reductions in the bay have worked. Brooke Landry, a biologist with the CBP and coauthor of the study, says that the sizes of dead zones—areas starved of dissolved oxygen—have also decreased. This has allowed grass to rebound in areas like Susquehanna Flats, near the head of the bay in Maryland, which took a beating in 2011 after Tropical Storm Lee barreled in and wiped out more than 800 hectares of vegetation.

These dramatic results give the team the assurance that restoration efforts are working, says Dennison. But those efforts need to continue, he adds.

Landry agrees. She says any future loss of funding could reduce the scale of management practices that can be put in place and slow down the recovery. “We need to stay the course, particularly now since we know that with enough funding, partnerships, and political action, we can reverse the degradation.”