The recent wildfires that tore through Oregon are only the beginning of the region’s problem. Now, that destruction has set the stage for landslides. Photo by USFS Photo/Alamy Stock Photo

He peers out the van’s foggy windows at the persistent rain hitting the precipitous slope off in the distance. A geologist and expert on landslides for the state of Oregon, over the past 20 years he’s seen too much destruction.

Here on the side of the highway near Dodson, Oregon, Burns motions toward a mud-colored boulder. “That’s pretty big, right?” Burns says. “You know that’s almost the size of a small car.”

In 1996, mud buried Interstate 84 and the train tracks, and flooded into the Columbia River, halting boat traffic. This rock came down from the hillside above, and remains as an ominous reminder.

“Imagine something like that coming at you at 30 to 40 miles an hour, inside of basically a wall of mud,” Burns says. “Not much is going to survive.”

“Thinking about going here and standing in this same spot when it’s raining definitely made me nervous,” Burns says with a laugh, pulling up the hood on his blue raincoat.

As heavy rains move into the Pacific Northwest this fall, Burns and other geologists are anxiously watching the Columbia Gorge. This summer’s dramatic wildfires have made the landslide-prone slopes even more treacherous.

The gorge’s basalt cliffs are layered with soft soil, and the area is reliably inundated with massive amounts of precipitation. Last year, for example, the region was pummeled by more than 130 centimeters of rain and snow.

Burns busts out his deeply scratched iPad and brings up a map. All around this area the map shows splotches of yellow and red, colors that indicate where landslides have happened before. “There are thousands of them in Oregon,” he says.

These historic landslides are a prime indicator of where new slides are likely to happen. And this map overlaps many of the same areas that were roasted by this year’s wildfires. This overlap is making a bad situation even worse. The wildfires stripped the slopes of their vegetation. The pounding rain can now hit the ground directly, and there are few roots to hold the soil in place.

There’s a well-studied link between wildfires and increased landslide frequency, Burns says, but most of the existing data is from much more arid climates. Geologists watching the gorge aren’t exactly sure what to expect.

The Columbia Gorge is a major corridor for traffic, trains, river barges, and spawning salmon.

About 23,000 vehicles use I-84 a day, with another 4,500 on the Columbia River Highway. Then there’s the trains below, and wheat-burdened barges headed for international ports.

Standing on the roadside of I-84, where it runs alongside the Columbia River, Stephen Hay peers up at Shellrock Mountain. Recently, a tide of rocks came tumbling down. Like half-blended ice cubes in a margarita, all of the corners were knocked off. The rocks stopped just shy of the interstate.

Hay, an engineering geologist for the Oregon Department of Transportation (ODOT), says it’s likely more will be coming down soon. Then there was the recent “tree toboggan.”

“We had a tree that was on fire come down the slope and ended up going through our retaining wall along here,” Hay says. 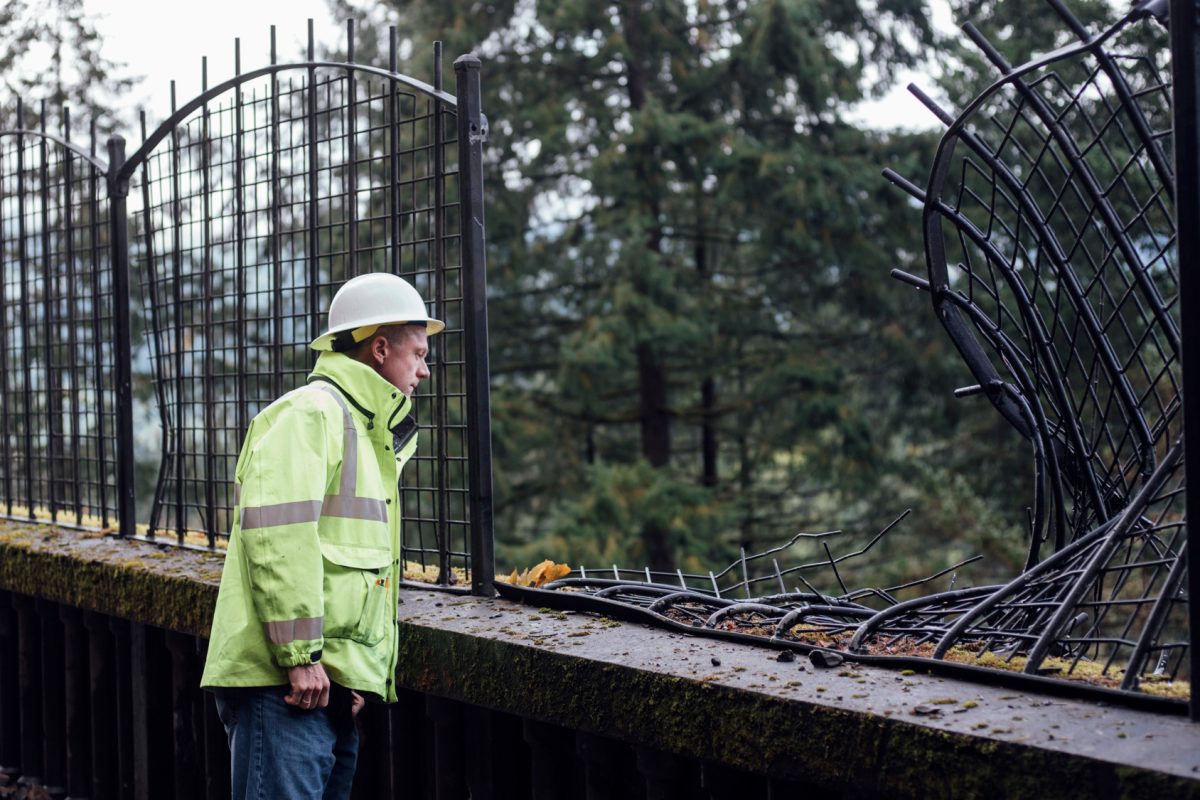 The burnt tree picked up so much speed it went through all the eastbound lanes of I-84 and pushed the center barrier too, he explains.

Hay flies through the gorge with a helicopter pilot at least once a month looking for fresh problem areas. But falling trees, stones, and mud don’t give much warning. And with the heightened risk caused by the wildfires, they will be a problem for years. So far this year, ODOT has spent nearly half a million dollars on fire fixes.

To protect the highway from landslides, the state and federal government have already taken to piling massive sandbags along one edge of the road, and closed one lane to traffic. But seeing what the mountain is capable of, it’s uncertain whether it’s enough.

Just as Hay gets set to leave, he stares back up at Shellrock Mountain and the massive pile of freshly churned rocks sloping toward the interstate. It’s just one spot in the gorge, but there are thousands of burned acres here. And more rain is coming.