Marine noise stresses whales and makes it harder for them to communicate. Photo by Matthew Maran/NPL/Minden Pictures

The fjords that etch out British Columbia’s central coast are deep, cold, and mostly very quiet—the perfect habitat for whales. The territory of the Gitga’at First Nation, situated around Douglas Channel, is home to the country’s highest concentration of humpback and fin whales, two distinct populations of killer whales, as well as Pacific white-sided dolphins, Dall’s porpoises, and more. “Humpback and fin whales think they have found heaven,” says Janie Wray, CEO of the nonprofit North Coast Cetacean Society (NCCS). “It’s one of the quietest places around.”

But this oasis of calm is under threat. In 2018, work began on a CAN $40-billion liquefied natural gas (LNG) facility in Kitimat, at the head of the Douglas Channel. Once operational, the plant will export 18 million tonnes of LNG every year. It’s one of more than a dozen LNG export projects under development in the region as Canada bids to establish itself as a major supplier to Asia.

Sixteen Indigenous nations signed off on the Kitimat facility and its pipeline, though not without controversy. Because natural gas evaporates when spilled, it is seen as a less contentious product than oil to transport through their territories.

Currently, a large ship passes through Douglas Channel once every two or three days. But a fleet of carriers will be needed to transport the fuel from the facility to markets in Asia. Eric Keen, codirector of science at NCCS,* estimates that the Kitimat facility will add 1,500 transits every year—an average of four extra trips per day. Traffic from small recreational vessels such as fishing boats is also expected to rise with the influx of new workers.

This pending surge in marine traffic threatens the region’s wildlife with noise and pollution. High on the list of concerns is the risk of deadly collisions. Fin whales in particular are at high risk because they spend a lot of time near the surface. Models developed by NCCS predict the frequency of collisions with fin whales could increase sevenfold.

Studies on the impacts of marine traffic on cetaceans understandably focus on established shipping routes. But for Douglas Channel, researchers are hoping to develop mitigation strategies before the LNG starts to flow.

In 2014, NCCS, working with World Wildlife Fund Canada and the Gitga’at Nation, installed four hydrophones in the channel. The project, known as Ships, Whales, Acoustics in Gitga’at Territory, tracks cetaceans across 200 square kilometers of coastal water.

“When a whale is vocal, we can pinpoint on a map where that whale is within 60 meters,” says Wray. “It’s pretty incredible.” 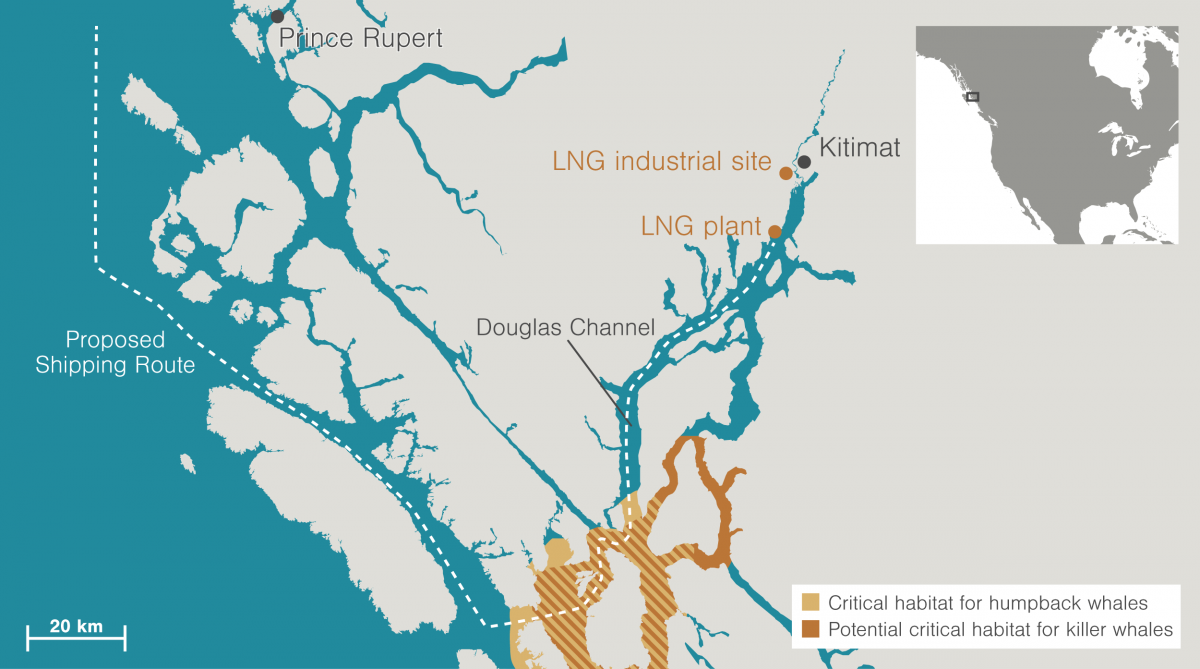 Because cetaceans have specific vocalizations depending on their behavior, the team can also work out what they are doing. Humpbacks, she says, use a specific call type while they shoal their prey with bubble nets. By contrast, prowling transient killer whales stay silent—until they make a kill. “They like to talk while they eat,” Wray says with a laugh. The hydrophone array has also confirmed the presence of a large population of fin whales, which have calls too low-pitched for humans to hear.

Cetaceans don’t always vocalize, so the team is also using visual surveys from a research station on Fin Island to better understand how they will react to increased human activity.

“From some of the data we have, we know fin whales feed closer to the surface at night,” says Wray. It would be better to have large vessels travel during the day, she says, when there’s less risk of collision. Other options to protect whales and other cetaceans living in the region include having ships travel at reduced speeds, moving shipping lanes away from groups of active animals, and managing annual shipping patterns in concert with seasonal changes in cetacean activity.

These suggestions will be passed to Gitga’at councilors, who will negotiate mitigation strategies with the operators of the LNG fleet.

The collaboration is a major effort by the Gitga’at Nation to protect their environmental, economic, and cultural heritage, says Keen. “The whales have decided this place is important,” says Keen. “It’s one of the last sanctuaries for them on an extremely busy coastline.”