First come the diving birds—common murres and rhinoceros auklets—piercing the waves and driving schools of small fish into tight balls. The fish flee upward, only to fall victim to the surface feeders: herring gulls and bald eagles. Predators are picking them off from above and below. But one more hungry mouth is showing up to crash the party.

A humpback whale, weighing roughly 45 tonnes, speeds toward the action, anxious to sate its voracious appetite. The birds are so preoccupied competing for the bounty that they are oblivious to the whale lunging upward with its jaw agape. In an instant, the humpback explodes at the surface and clamps its massive mouth. Trapped inside is far more than fish.

“We saw this over and over again, the humpbacks engulfing seabirds,” says Trevor Haynes, a fisheries ecologist with the Wildlife Conservation Society in Alaska who published a study on his observations in 2013. “The birds were so focused, they didn’t see the whales coming. It was amazing.”

Some of the birds are lucky and get spat out alive, with only ruffled feathers. Others are killed or die later from their injuries. Some smaller ones pass right through the whales’ guts, emerging naked and chocolaty. In one instance, Haynes found the remains of one ancient murrelet and two marbled murrelets dripping with humpback feces in southeastern Alaska’s Glacier Bay. 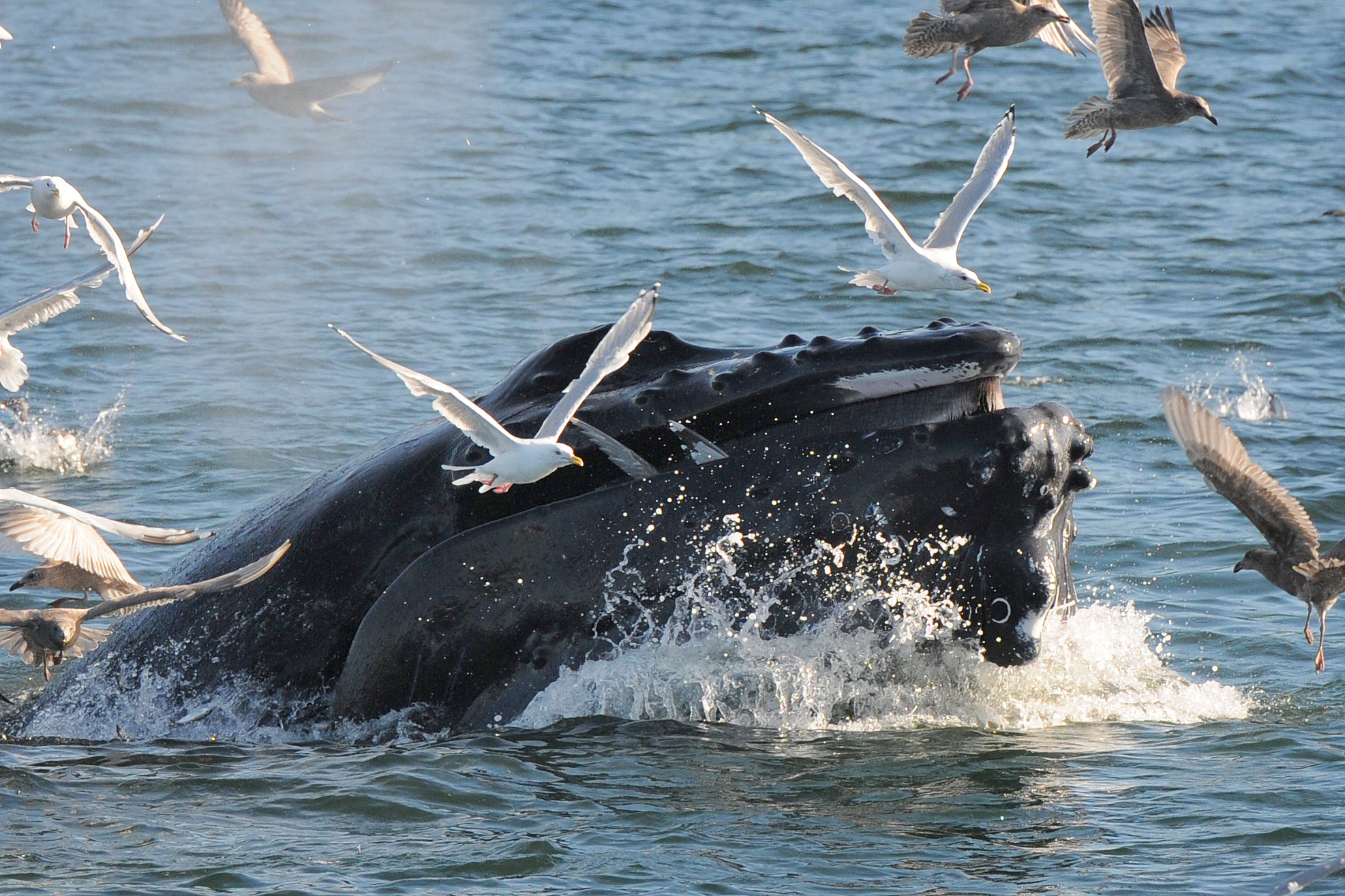 A herring gull is eaten by a humpback whale in Blackfish Sound off northeastern Vancouver Island, British Columbia. Photo by Christie McMillan/MERS

While the extent of this collateral damage remains unknown, there have been reports of whales lunge feeding and ingesting birds all along the west coast of North America.

In Frederick Sound, in southeastern Alaska, researchers in 1983 reported finding the remains of Cassin’s auklets that had been partially digested by humpbacks. Both birds and whales had been feeding on a large mass of plankton.

“Feathers were largely lacking and the eyes were missing, but otherwise the epidermis was intact and exhibited only superficial signs of digestion,” the researchers reported. “For the auklets, this was simply a case of being in the wrong place at the wrong time.”

Humpback whale populations have steadily increased in the North Pacific—from 1,500 in 1965, when afforded protection from commercial whaling, to an estimated 20,000 today—and the toll on birds may be rising as well. In Unimak Pass, in Alaska’s Aleutian Islands, humpbacks reportedly take dozens of short-tailed shearwaters each summer. Off the California coast, species ranging from pink-footed shearwater to brown pelican and cormorant have found themselves on the wrong side of a feeding frenzy.

Whatever the total carnage wrought by the increasing whale populations, researchers suspect there have been no broad-scale impacts on seabirds. The resurgence of the humpbacks, however, may have serious consequences for specific populations of endangered seabirds.

Perhaps, as humpbacks have learned to crash the dinner party, seabirds will appreciate when it’s time to leave the table.