The American Museum of Natural History is renovating its oldest exhibit—a gallery first opened at the turn of the last century featuring the cultures of Northwest coast peoples. The exhibit Photo by AMNH/D. Finnin

Curator Peter Whiteley stepped up to the podium in the middle of the Hall of Northwest Coast Indians at the American Museum of Natural History (AMNH) in New York to make a statement. Next to him stood guests from the First Nations communities whose histories and artifacts—their carved wooden house posts, ceremonial poles, and masks, clothing, baskets, and tools—were on display throughout the hall. Several representatives from the Haida, Tlingit, Kwakwaka’wakw, and Nuu-chah-nulth had flown in to join the museum for the milestone announcement: after nearly 120 years, the hall was about to see a major upgrade.

If you walk through the exhibit today, you get the impression that the cultures it portrays are dead to history. But as the First Nations guests would attest, their respective societies are alive, well, and thriving.

The upcoming renovation aims to breathe life into the still and quiet artifact assemblage. “Rather than having a passive array of objects displayed on the wall, we can create immersive impressions of a culture,” says Kulapat Yantrasast, the creative director at wHY, the design firm that will upgrade the exhibit.

The AMNH’s Hall of Northwest Coast Indians first opened its doors in 1899, thanks to the efforts of Franz Boas, an anthropologist who traveled the Pacific Northwest collecting First Nations relics with his long-term collaborator George Hunt, of the Kwakwaka’wakw people. The exhibit hall has not appreciably changed since Boas’s time as assistant curator of ethnology, from 1897 to 1902. Through his work, Boas promoted a concept—radical at the time—that societies should be viewed not as dots on an evolutionary path from “primitive” to “advanced,” but as cultures in their own right, each deserving appreciation. 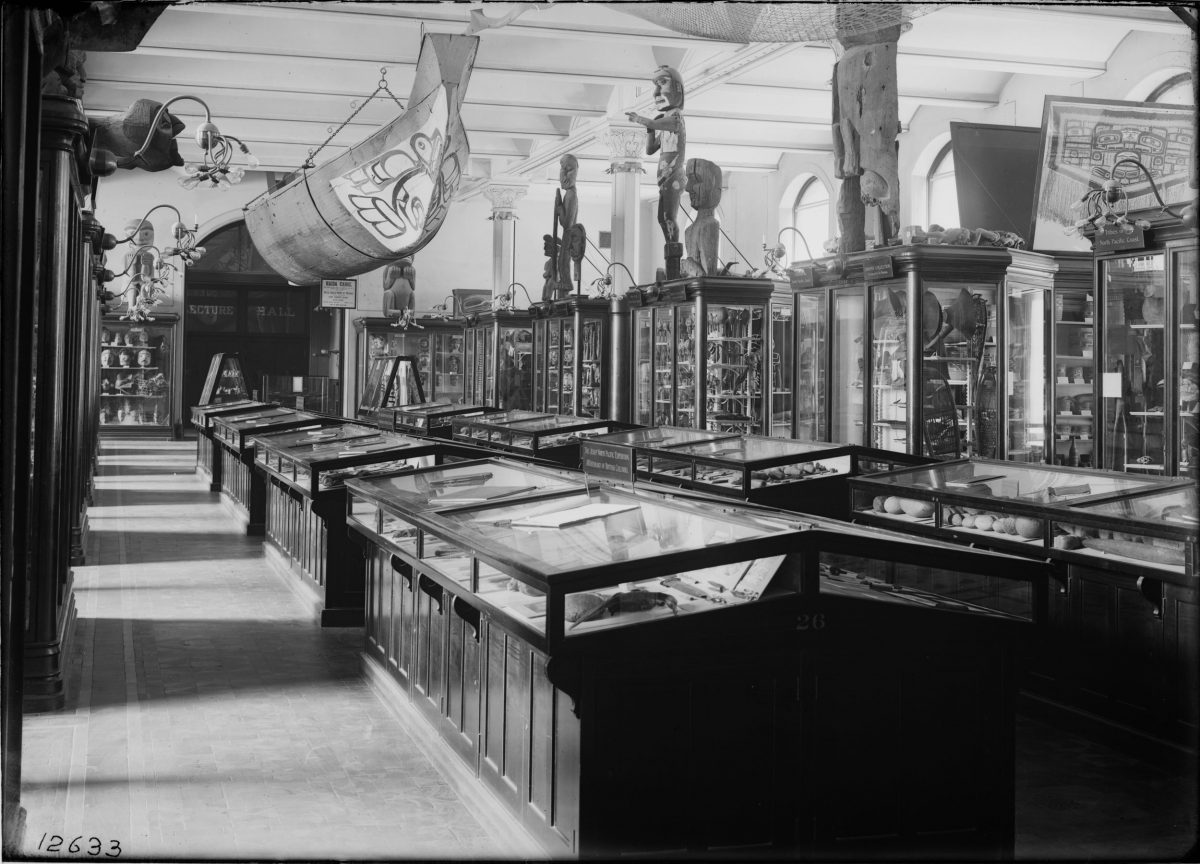 The AMNH’s exhibit on Northwest coastal peoples, seen here in 1902, is the museum’s oldest. Photo by AMNH

More than 100 years later, the museum is finally taking the next step in properly reflecting the Pacific coast nations as they are: dynamic societies with traditions that stretch back to antiquity. To achieve this shift, the museum is working closely with the First Nations.

Bill Cranmer, a hereditary chief of the ‘Namgis band of Kwakwaka’wakw people, and Hunt’s great-grandson, salutes the upgrade’s multimedia component. Born in 1938, Cranmer stood strong and tall as he sang a welcome song from the podium after Whiteley’s speech. Cranmer thinks the upgrade should showcase his tribe’s life and philosophy in an interactive form. “They should use more technology,” he says. “So that people can see our life and our culture.”

Other First Nations guests also hope that the updated exhibit will help bring the masks and other artifacts to life, lifting the spiritual and cultural concepts off the museum’s walls to fill the hall with sounds, colors, and emotions. “It’s time to give First Nations a voice,” says Ron Hamilton of the Nuu-chah-nulth people. “We can speak for ourselves.”

The efforts of the AMNH and other institutions to reach out to First Nations is in stark contrast to the past.

Garfield George, head of the Tlingit Deisheetaan clan Dei shu hit sa tee, of Angoon, Alaska, says that one of his tribe members once found part of a canoe among the museum’s artifacts. That specific vessel bore a tremendous historical significance for the Tlingits: it was the only canoe to survive the infamous bombardment of Angoon by the United States military in 1869. Thanks to that canoe, they survived, says George. It’s not clear how the canoe part had landed at the museum, but it was sent back to Angoon it got a hearty reception—like a family member returning home after a long journey, he says.* 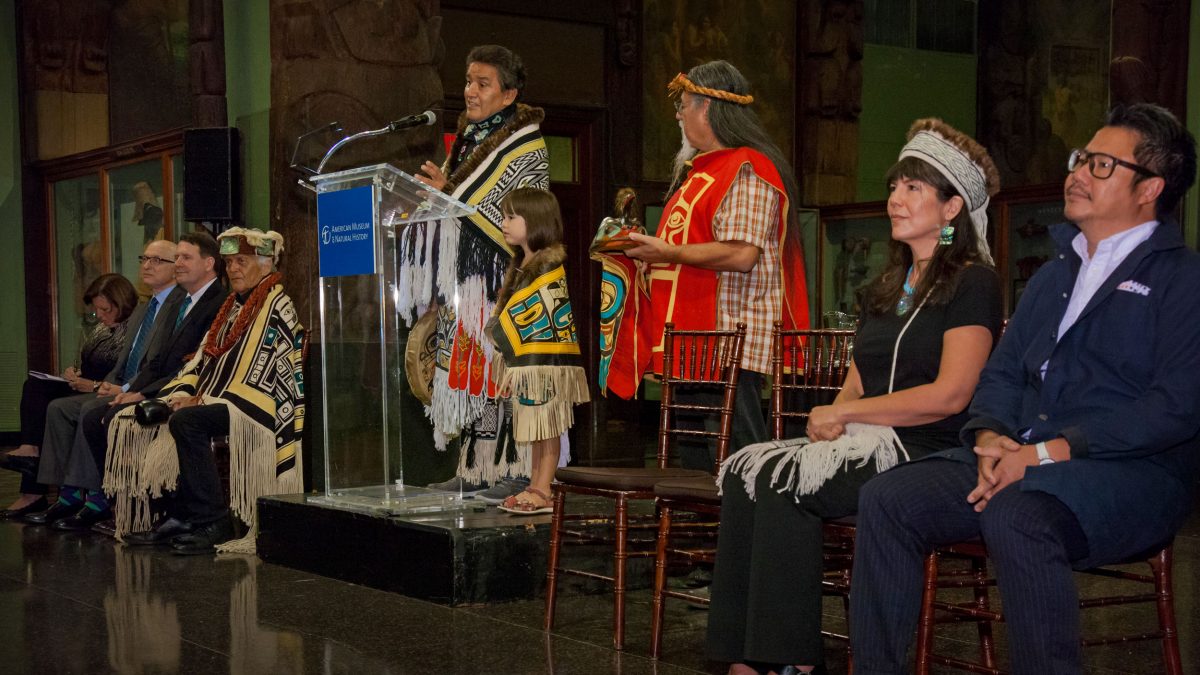 Garfield George, head of a Tlingit community in southern Alaska, speaking during a ceremony Monday announcing the plan to upgrade the AMNH’s Hall of Northwest Coast Indians. Photo by AMNH/M. Shanley

It’s not clear how the canoe had landed at the museum, but when George stated it was property of his tribe, the museum sent it back to Angoon where it got a hearty reception—like a family member returning home after a long journey, he says.

Repatriation of First Nations’ property has become an important gesture toward righting past wrongs. Cranmer says his tribe, too, had an ill-gotten collection of masks returned—by London’s British Museum.

But Cranmer says the mask collection his great-grandfather helped procure for the AMNH was obtained as a fair deal—and the museum is where the masks belong. The delicate items also stay better preserved here, he adds. Indeed, as part of the exhibit upgrade, museum conservators will revitalize over 1,000 relics, sealing cracks and cleaning the dust, soot, and coal particles that have accumulated with time.

For many people, a trip to the AMNH, which sees five million visitors each year, will likely be their first—and perhaps only—exposure to Pacific coast nations.

The restoration project is budgeted at US $14.5-million. The hall will remain partially open throughout, with the transformation expected to be complete by 2020, to coincide with the celebration of the museum’s 150th anniversary.

*Correction: This paragraph has been updated to clarify that it was not George Garfield himself who found the historic canoe at the AMNH. Nor was it a full canoe, just a piece of one.