Since October 2017, a suite of scientific equipment aboard the MV Columbia has been collecting data about ocean acidification off the west coast of Canada and the United States. Photo by Alaska Marine Highway System

At 7:00 a.m. on a recent Sunday, Christy Harrington is out at the ferry terminal in Ketchikan, Alaska, tending to the docked MV Columbia. It’s summer, and the sun’s already been up for two hours. The piping on the aging ferry’s ocean monitoring system is clogged with jellyfish, and Harrington, the environmental specialist for the Alaska Marine Highway System, is there to dig them out.

“She does as best as she can,” Harrington says lovingly of the 45-year-old ship. “She just seems to have a few more maintenance issues.”

Since the late 1970s, the MV Columbia has ushered passengers traveling with cars and kayaks between Bellingham, Washington, and Skagway, Alaska, along a 1,600-kilometer route through the Inside Passage—the misty, island-dotted coastal region from Puget Sound to the Alaska Panhandle. And for the past two years, the ship has performed a new role. Every three minutes while at sea, the vessel has recorded the ocean’s vitals—its temperature, salinity, dissolved oxygen content, and carbon dioxide concentration—to keep tabs on ocean acidification. 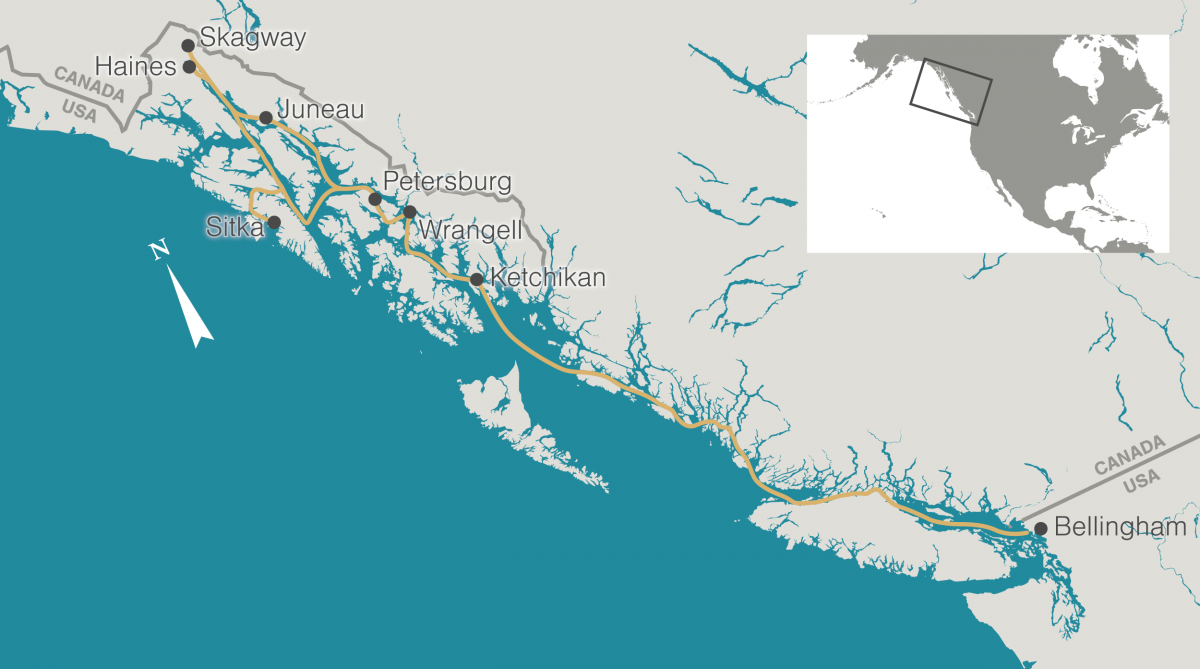 Twice a week, the MV Columbia traverses the Inside Passage between Bellingham, Washington, and Skagway, Alaska. Map data by OpenStreetMap via ArcGIS

On the open ocean, scientists have been measuring those parameters for decades. But in many remote nearshore regions, little data, if any, exists to indicate what’s happening to coastal ecosystems as oceans become increasingly acidic. This data is of vital importance, especially for Alaska’s burgeoning shellfish industry.

Allison Bidlack, director of the Alaska Coastal Rainforest Center at the University of Alaska Southeast, says acidification has rocked Washington State’s shellfish growers in recent years, and Alaska’s growers fear similar hardships. “They are concerned about whether or not we could start seeing the same effects up here,” Bidlack says. Providing that insight is one of the motivations behind the research, and she hopes the project’s findings can point to certain bays or fjords that might foster bivalve rearing.

As oceans continue to absorb carbon dioxide from the atmosphere, some coastal species face dire consequences. When carbon dioxide dissolves into seawater, it reduces the availability of calcium carbonate, the chemical needed by certain animals to form their shells. Without easy access to carbonate, juvenile organisms need to expend more energy to put on shell. This can compromise their health by making them more susceptible to disease. It can also hinder their growth, an important consideration for shellfish farmers.

Jeff Hetrick, director of the Alutiiq Pride Shellfish Hatchery in Seward, Alaska, says the more information there is on local ocean chemistry, the better he and others in the shellfish industry are able to maintain their hatcheries. For instance, if observations show the level of carbonate in the water is dropping, they can add soda ash to the shellfish tanks to counteract it. Monitoring efforts like that on the MV Columbia provide that needed data, he says.

Although the MV Columbia has been gathering data since October 2017, the project was years in the making. Bidlack had long wanted to use a ferry as a platform for ocean monitoring, figuring that unlike some other oceanographic research efforts, which offer snapshots in time, a ferry would provide reliable, continuous data along its all-season route. Akin to repeating an experiment over and over again, the MV Columbia could provide that information twice a week for months on end.

In the winter of 2014, while attending an ocean acidification workshop, she met Wiley Evans, an oceanographer then working for the US National Oceanic and Atmospheric Administration and now with the Hakai Institute*. A veteran of ocean-bound projects with lengthy routes—including one aboard a container ship where he “babysat a carbon dioxide system” from California to New Zealand—Evans had recently returned from Whittier, Alaska, where he had measured carbon dioxide from a glacier-tour vessel.

“I grabbed him at that workshop,” Bidlack recalls, “and I was like, ‘Listen, this is what I want to do. I think we can do it. I think we can get the buy-in from the ferry system to do this. Are you interested?’” The two quickly hatched a plan.

Despite their enthusiasm, it took three more years to get the MV Columbia ready for data collection. First, engineers outfitted the ferry with a seawater line to tap water from the ocean, then they drilled holes through the hull to install the oceanographic equipment—both of which required approvals by the US Coast Guard. Propeller and engine problems further delayed the launch.** “We were naive,” Evans says about the setbacks. 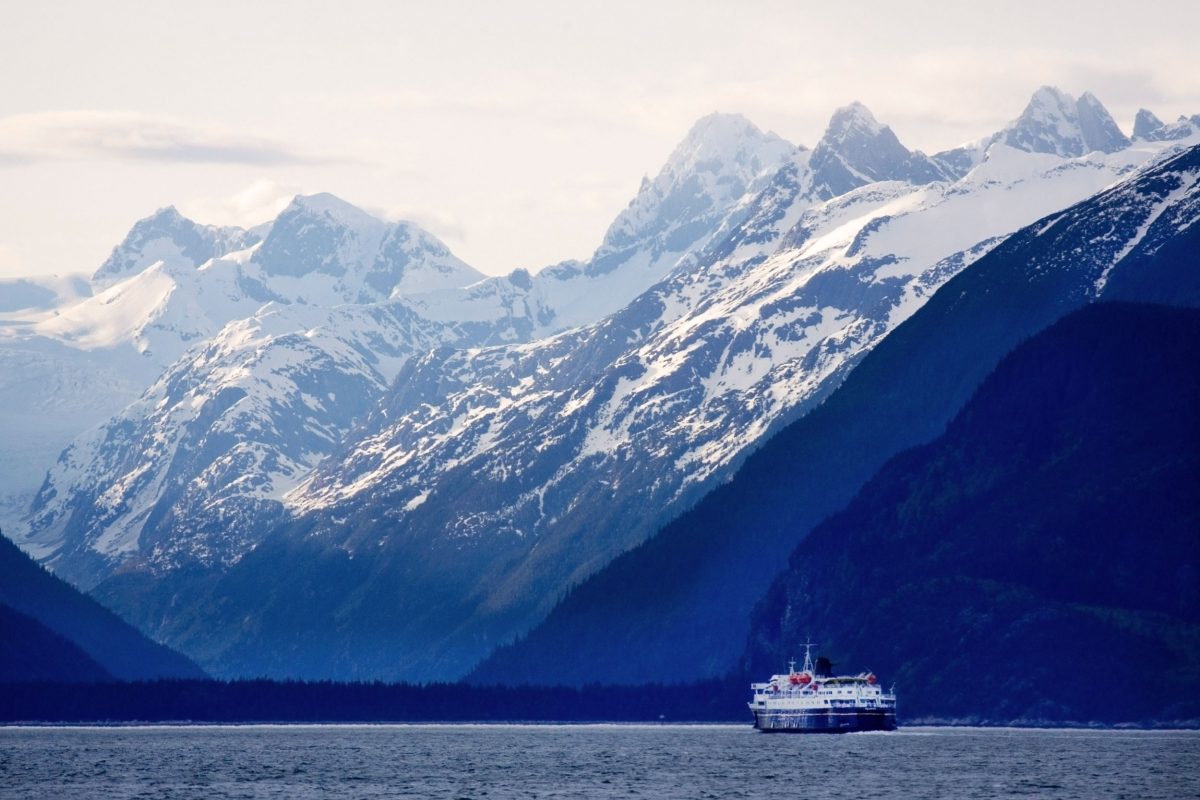 An infusion of glacial meltwater means that the water in Lynn Canal, Alaska, is particularly sensitive to changes in carbon dioxide. Photo by Design Pics Inc/Alamy Stock Photo

As Evans combed through the data, some surprising trends jumped out. For one, the amount of carbon dioxide in the water is lower in some areas than he was expecting, notably in regions where phytoplankton is blooming or where glacial meltwater flows into the sea. In contrast, higher concentrations of carbon dioxide are found in sites where deep ocean water wells up toward the surface. Due to a process known as buffering, even the same change in carbon dioxide can have a varying effect on the acidity of the water, Evans says.

“If you remember titration back from high school chemistry, pH doesn’t change a whole lot at the beginning,” Evans says. “But then as you keep adding the titrant, and the fluid that you’re titrating becomes less and less buffered, the pH change becomes bigger. It’s the same idea.”

This means that if the water is less buffered, which it naturally is in the winter—because photosynthesizing organisms have less sunlight to work with, and because storms churn the water bringing inorganic carbon up from the depths—then it’s easier for anthropogenic carbon dioxide to lower the water’s pH, Evans says, which can hurt sensitive shell-building organisms.

But unfortunately for the monitoring team and Alaska’s shellfish producers, the project may be cut short. In September, the Alaska Marine Highway System will take the MV Columbia out of service for the winter, replacing it with a smaller vessel that’s less expensive to run. The decision reflects recent budget cuts by the Alaska legislature to the state’s ferry system.

There’s a chance the MV Columbia will return to service in the spring, Bidlack says. But given the wear and tear that years of salt water and a long transit route have inflicted, the fate of the ship remains unclear. “We really don’t know what’s going to happen,” she says.

Though the ferry has its eccentricities, Harrington emphasizes the importance of the vessel to the ocean monitoring project.

“It’s a perfect platform to provide this type of research,” she says, “and the outcome will definitely provide Alaska with great [data] … for our current and future fisheries.”

**Correction: This sentence was accidentally missing from the story when it was first published.