Scientists believed there was only one species of manta ray until 2009, when Andrea Marshall, then a graduate student at the University of Queensland in Australia, showed that there were actually two distinct species: the coastal-living reef manta ray and the open-ocean oceanic manta ray. Marshall suspected there was even a third irregularly colored manta species. But the rays were hard to glimpse and even harder to capture. The specter of this missing manta has lingered over manta biologists ever since.

Now, a new study offers the most robust genetic evidence yet of the new species, which scientists have dubbed the Caribbean manta ray.

“It is nice to see that the majority of the manta research community is united behind the idea that there is indeed a third species of manta ray,” says Marshall, who was not involved with the research.

“The fact that we are still identifying new species of megafauna is amazing,” says Josh Stewart, an associate director of the nonprofit the Manta Trust and an author on the study. “These aren’t tiny gobies that can go around undetected.”

It’s incredibly tricky to identify a Caribbean ray unless you know exactly what you’re looking for, as the species have highly variable appearances, says Stewart. Take the mouth, for example. Some Caribbean rays have white mouths, others have black mouths, and some have mouths that fall somewhere, vaguely, in between. “They always kind of look like a bizarre mix of things,” Stewart says. 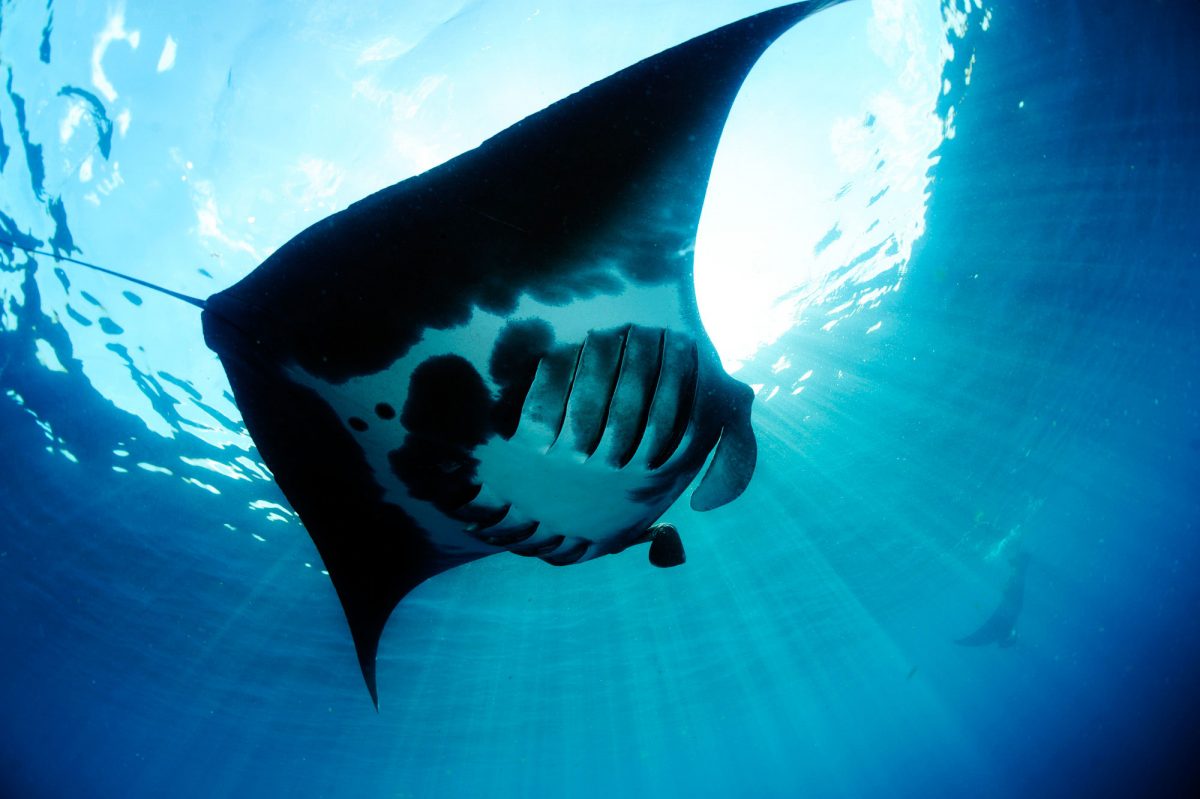 The Caribbean manta ray is closest in appearance to the gigantic oceanic manta ray, which has winglike fins that can span up to seven meters. Photo by Manta Trust

The most concrete difference lies in the Caribbean ray’s dermal denticles—scale-like “skin teeth”—which are shaped differently than those of both oceanic and reef rays. But it’s difficult to sleuth out denticle shape from a distance. “And you have to be right up close or have a dead one to be able to see those,” Stewart says.

The renewed substantiation of the Caribbean ray stemmed from a reevaluation of the genetics of manta and devil rays, and was the culmination of a years-long collaboration between researchers across the world, according to Emily Humble, a conservation genomics expert at the University of Edinburgh and a lead author on the study. “It has one of the largest acknowledgements of any study I’ve seen,” Humble says.

To compile their genetic database the researchers collected tissue samples from rays worldwide, mostly from dead rays in fish markets. “You can’t just go out and go fishing for an oceanic manta ray,” Stewart explains. The manta rays that snorkelers may spy in the Gulf of Mexico are Caribbean manta rays.* But oceanic mantas, which roam the open ocean, are much harder to track down.

To gather samples of the Caribbean manta ray, Stewart headed to a manta nursery near a cascading set of coral outcroppings in the northern Gulf of Mexico.

Surprisingly, one of the samples Stewart collected seems to have come from a hybrid manta—a cross between an oceanic ray and a Caribbean ray. The hybrid’s presence suggests the two rays may have only diverged very recently, Humble says. “They’re still on the way to becoming completely separate evolutionary lineages,” she adds.

The Caribbean manta’s Rorschach-like appearance and elusiveness have long precluded researchers from gathering enough evidence to formally describe the species. But with this mounting pile of genetic evidence, Marshall hopes the formal description will be ready sometime this year.

*Correction: This sentence originally said that the rays snorkelers may spy in the Gulf of Mexico are reef manta rays. It has been updated to say Caribbean manta rays.