Eg2301, a North Atlantic right whale seen here with her calf, was later caught in fishing gear. She died in 2005 due to her injuries and the persistent, energy-sapping drag of the line. Photo by New England Aquarium taken under NOAA permit #775-1600-2

The North Atlantic right whale drifted in the currents off the North Carolina coast, her diminished 30-tonne body gone slack. For months, the 12-year-old whale known as Eg2301 had been bound by 10-millimeter-thick fishing line* that lacerated her left pectoral flipper and shredded her skin. The rope was embedded in her comblike baleen and blocked her blowholes. Her last migration down from Canada had been a slog; now emaciated and weak, she failed to surface for a breath. Twenty minutes passed, 21, 22. She listed and lost focus. She ran out of oxygen. She drowned.

In March, a US Coast Guard helicopter pilot spotted the dead whale washed up on a barrier island off Virginia.

Within 24 hours of the sighting, Woods Hole Oceanographic Institution biologist Michael Moore rushed to the carcass, sawed off a two-meter length of baleen, and carried it like a yoke across his shoulders from the beach. Moore later handed it off to a colleague, Nadine Lysiak of the University of Massachusetts. In her lab, this disembodied hunk of anatomy could add “background and flesh to the whale’s whole saga,” Moore says.

Only recently have scientists discovered that baleen, keratin plates that grow from the upper jaws of filter-feeding whales, captures biochemical data as it grows continuously throughout the whale’s life. Like reading an ice core, analyzing Eg2301’s baleen from end to end provides a chronicle of changes in hormones and stable isotopes—chemical markers that offer clues to her health, travels, and meals; whether she gave birth; what stressed her out and when; and what ultimately killed her.

Eg2301 died in 2005, but it took years for scientists to validate and share the hormone-measuring method that has now enabled this tale to be told. Working in her Boston lab, Lysiak drilled samples from the dried baleen, which, she says, had been “transformed by a lot of Herbal Essences shampoo from a smelly thing into a long, shiny, beautiful triangle of data.” She and her colleagues analyzed how the concentrations of steroid and thyroid hormones and stable isotopes changed throughout the last eight years of the whale’s life.

Alex Werth, a biologist at Hampden-Sydney College in Virginia who was not involved in the study, says the advent of baleen analysis is “a clever and welcome means of learning about a poorly understood animal, including our impact on its survival.”

In Eg2301’s baleen, that impact shows up as soaring stress hormones—specifically corticosterone—during her dooming entanglement. Mouth agape to feed, the whale probably caught the first length of fishing line in her left baleen plates. The more she struggled, the worse the knotted ropes grabbed her. As Amy Knowlton, of Boston’s New England Aquarium, explains, a whale will go through “violent maneuvers” to break itself from the grasp of tangled line—“slashing the tail, lifting the head out, rolling the body to try to get free.”

Soon, according to the whale’s wounds and remaining rope, the line was threaded like floss through the baleen on both sides of her mouth, wrapped tightly around her left flipper—cutting a deep wedge and impeding blood flow—and stretched across her blowholes. This initial injury, however, was just part of the insult of entanglement. 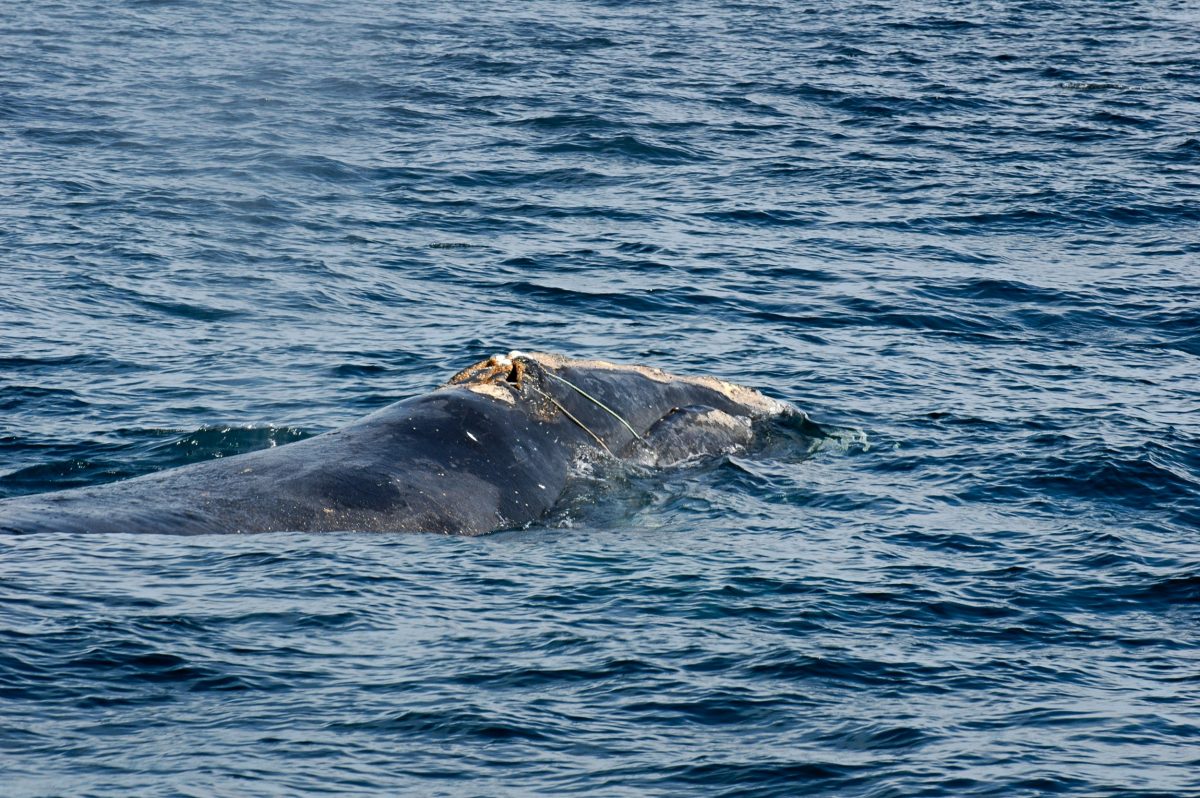 Biologists first spied Eg2301 entangled in fishing line in September 2004, but they were unable to cut the lines loose. The whale died five months later. Photo by New England Aquarium

Eg2301 carried the gear for six to nine months, an energetically costly effort, with the ropes sometimes impeding her breathing and feeding. The whale’s baleen shows that in the summer of 2004, thyroid hormones surged—a sign of increased energy use and thermal stress. It tells of how the whale started burning fat as she began to starve. It reveals that, physiologically, Eg2301 remained in distress for the rest of her days.

The keratin recorded other events as well. Deposits of carbon and nitrogen (the ratios of which change as an animal moves between food webs) marked her annual migrations, some 3,000 kilometers, between Canada and the eastern United States—travels confirmed by spotters’ records. Fluctuating thyroid hormones, which regulate metabolism, tracked as expected, with seasonal fluctuations in prey. And a long progesterone peak into 2002 highlights a successful pregnancy—a biochemical timeline that syncs with sightings of Eg2301 and a calf later that year.

More than just lending chemical corroboration to what is already known, the baleen diary quantifies the whale’s experiences. Comparing and contrasting hormone spikes, for example, let Lysiak calculate the stress level of different experiences and the toll each took on the animal’s health. For Eg2301, pregnancy and entanglement, which affected different stress hormones, were by far the most taxing events she experienced in the eight years recorded by the baleen.

With careful analysis, such data could point researchers to the time and place of a stressful event, which, for entanglement, could even mean pinpointing the offending gear’s owner. (In this case, ownership wasn’t clear.)

Such knowledge can be useful in conservation efforts. Until recently, ship strikes were the biggest killer of this critically endangered species. But adjustments to ship traffic patterns have substantially cut down on lethal hits. Now, “many fishermen have shifted to rope that’s strong as steel,” Knowlton says, “and that’s escalated whale deaths in the last dozen years.” More than 80 percent of North Atlantic right whales—whose population numbers fewer than 500—show the scars of encounters with fishing gear.

With so few whales remaining, “individual whale losses matter,” Lysiak says. She says this new baleen analysis technique has the potential to give each whale a voice. Especially when researchers otherwise couldn’t know a whale’s timeline or cause of death, baleen could add valuable new information to help push for better management of the species.

But for Lysiak, the work goes beyond constructive outcomes, like demanding the development of whale-safe fishing gear: Eg2301’s story hit her emotionally as well as intellectually. “It’s easy to disconnect because this happens out of sight, but our effect on these animals can be horrific,” she says.