Harbor seals eat a lot of juvenile salmon, potentially affecting the beleaguered fish’s population. A debate as to whether the seals should be culled is currently ongoing. Photo by Donald Enright/Alamy Stock Photo

Earlier this year, Roy Jones Jr., a hereditary chief with the Haida First Nation, took a trip up the Skeena River, one of British Columbia’s prime salmon spawning grounds. Not far from the river mouth, he looked across the water at what he thought was a row of polished rocks. Then he pulled out his binoculars.

“There were probably 120 seals lined up across that river,” Jones says.

The seals were gobbling up juvenile salmon as the smolts made their way to the Pacific Ocean. It’s just one example of a problem that’s been growing up and down the coast, argues Jones, who recently co-founded an organization, Pacific Balance Pinnipeds Society (PBPS), to advocate for a cull of British Columbia’s harbor seals. A reduction in the harbor seal population is necessary to protect salmon species, some of which are highly threatened, Jones says. “We’ve got to do something, plain and simple.”

Last century, harbor seals on Canada’s west coast were hunted for their pelts and culled for bounties paid at up to five dollars “per nose.” Their population shrank to fewer than 10,000 before the federal government imposed a hunting ban in the early 1970s. Since then, harbor seals have made a steady recovery and their BC population is now estimated at 110,000—similar to what it likely was before European contact.

But the PBPS and others argue that seal numbers have grown out of hand. The seals are eating too many salmon smolts, they contest, which impacts BC’s lucrative salmon fishery and is hurting other members of the ecosystem, such as the iconic and threatened population of salmon-eating southern resident killer whales.

The idea of culling a marine mammal to protect fish stocks isn’t new—it’s a relatively common countermeasure employed around the world in areas where fish populations are declining. Ultimately, the decision to carry out a cull would need to be made by Fisheries and Oceans Canada. The problem for cull advocates is that there’s little scientific evidence to support the approach.

Andrew Trites, a marine mammal expert at the University of British Columbia in Vancouver, says that because some harbor seals eat a lot of salmon smolts they may be impacting salmon populations, but he stresses that the harbor seal population hasn’t changed in 20 years.

Trites says targeted predator control might make sense in very specific cases, such as where anthropogenic changes to rivers—like dredging or dam building—have created conditions that seals can exploit. But the idea of broadly culling harbor seals is misguided and likely ineffective, he says.

“We think that we can somehow custom engineer an ecosystem—that we can surgically extract one species and leave another and get everything we want,” he says. “But it just doesn’t work like that.”

The decision to cull is most often based on politics and perceived social benefits, rather than science. In British Columbia, the debate seems to hinge on who—or what—gets first dibs on the increasingly scarce salmon. 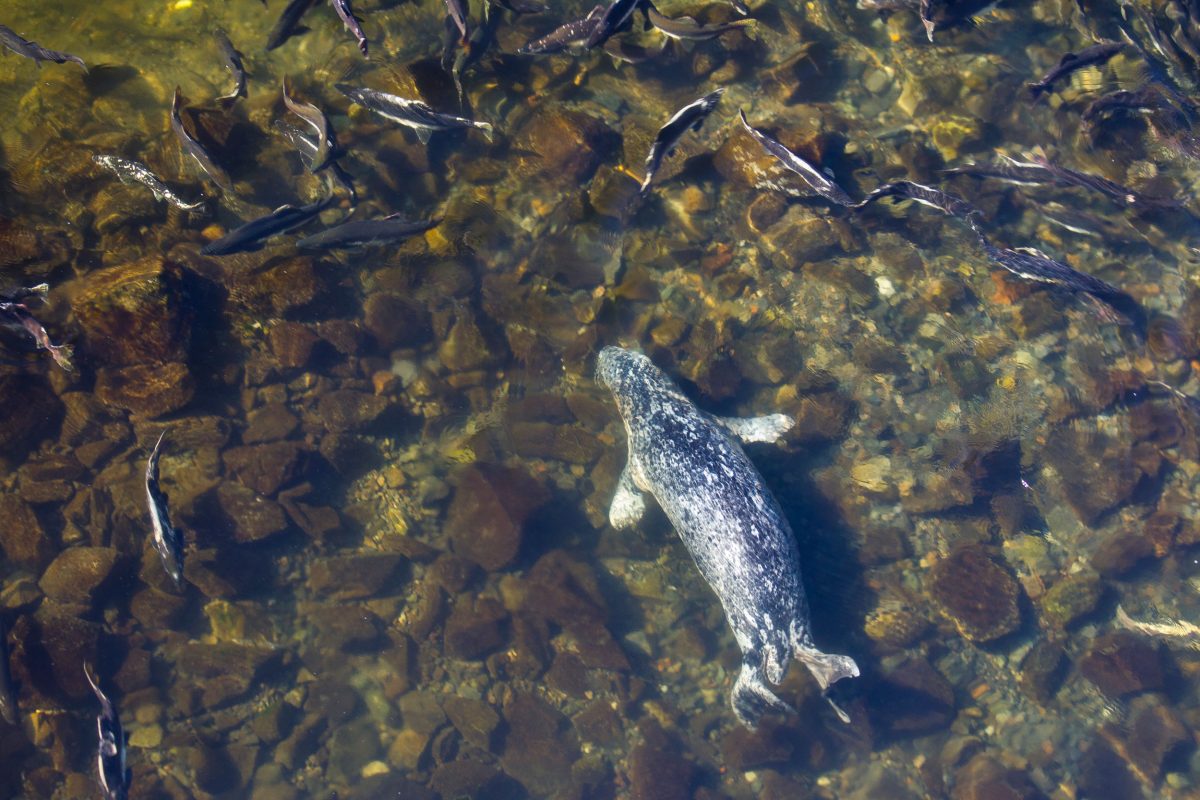 For Jones, culling seals could help save the fishing industry that many coastal towns and First Nations communities have relied on for generations. Jones grew up on boats, he says, and he ran his own commercial fishing vessel for 20 years until the catches became too small to earn a living. In his community on Haida Gwaii, he says, a way of life is disappearing.

Rightly or wrongly, Jones sees a direct correlation between the alarming decline of salmon and the recovery of harbor seals. “They made laws in the metropolitan world that have become nature’s worst enemy,” he says.

The recreational fishing industry, which employs an estimated 8,400 people in the province through guiding companies and lodges, also says it is being hurt by seals. Owen Bird, executive director of the Sport Fishing Institute of British Columbia, says fishers are seeing more harbor seals at the mouths of rivers, and that seals are moving farther upstream in some rivers in search of food. The result is fewer salmon for anglers and more reports of seals stealing fish from hooks and nets.

Bird doesn’t support a broad seal cull, but wants to see a targeted cull of specific seals that are over predating on salmon smolts. “It should be more about predator control and targeting individuals,” he says.

Not everyone sees the seals’ resurgence as a problem, of course. Alongside fishing, ecotourism is also big business in the province. Seeing cute and charismatic harbor seals can be the highlight of a visitor’s experience says Jilann Lechner Campbell, who co-owns Vancouver Island Whale Watch in Nanaimo.

Sheryl Fink, director of Canadian wildlife campaigns with the International Fund for Animal Welfare, sees parallels between British Columbia’s seal cull debate and a similar one going on in Canada’s Atlantic region. There, some people blame harp and gray seals for faltering cod stocks. It’s a knee-jerk reaction, Fink says, and one that oversimplifies a very complex ecosystem. Even if a cull were carried out, it’s unlikely it would have the desired impact, she says.

Fink also questions the ethics of culling: “We need to ask ourselves whether it’s right to kill one marine species to protect another, simply because that species is economically important to certain groups.”

For Trites, the seal cull debate raises bigger questions about the future of the oceans and what we prioritize. It’s a discussion that society as a whole needs to engage in, he says, and not just those with a vested interest.