Rows of towering wind turbines, some taller than skyscrapers, dot the ocean landscape. As the blades whir through the air at a dizzying 290 kilometers per hour, they churn out thousands of megawatts of clean, renewable energy. The danger they pose to seabirds, however, blemishes their green credentials.

In the United States, wind farms have so far been a feature of the terrestrial landscape, with installations from Southern California to northern Maine generating more than six percent of the nation’s energy. But off the mid-Atlantic coast, interest in offshore wind farms is growing, and so is the danger to seabirds.

For the past five years, Caleb Spiegel, a biologist with the US Fish and Wildlife Service, has worked with other agencies and researchers to tag and track hundreds of seabirds from three species—northern gannets, surf scoters, and red-throated loons—as they flit from the Arctic down to the Gulf of Mexico. Spiegel says the information gathered by the Fitbit-looking satellite tags can help industry and government make smart decisions about where turbines are built.

In the past, surveys conducted from boats and planes using radar have charted bird concentrations and flight paths, making maps that have informed turbine development decisions. But such surveys only provide snapshots of bird behavior. With satellite tracking, Spiegel and his colleagues collected continuous, detailed measurements that more clearly highlight where birds’ paths and proposed wind energy areas overlap.

“Right now, offshore wind power is still quite new,” Spiegel says. “We have an opportunity to minimize impacts, but still pursue a resource that will lead to lower emissions.”

It’s still early in the game, Spiegel says, but so far they’ve drawn a few conclusions from the study. For example, the tracking data shows that all three bird species tend to stay close to shore during the winter months, though northern gannets do make extensive use of offshore waters—exposing them to greater overlap with designated wind energy areas. Distributions of red-throated loons and surf scoters also overlap with several designated wind energy areas, primarily during spring migration. 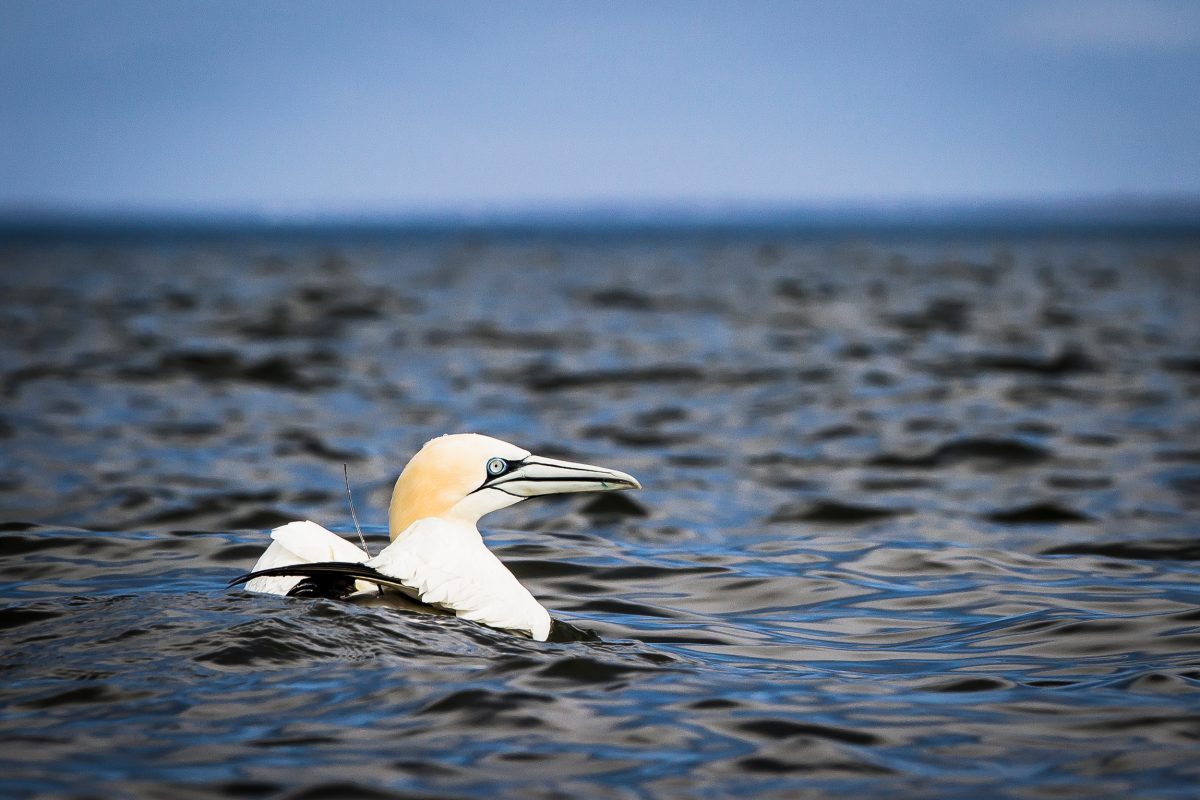 To put the importance of this newfound granularity in perspective, consider the Altamont Pass Wind Farm in central California. The 576-megawatt turbine jungle sprawls across the foothills of the Coast Range Mountains and runs smack dab in the middle of a migratory fast lane for raptors, red-tailed hawks, and other birds. The wind farm has been blamed for tens of thousands of bird deaths since the blades started spinning in the 1970s.

Spiegel thinks that with modern satellite tracking, today’s wind energy developers can create a truly green industry, but they have to buy into wildlife conservation.

Catherine Bowes, the director of the offshore wind energy program at the National Wildlife Federation, believes developers care about birds. “They want responsible development of offshore wind, particularly since these birds have a pretty high level of protection under the law,” she says.

Spiegel agrees. The industry has reached out to him, asking for direction on how to protect birds. “They want to be stewards,” he says. “We all want to do the best job possible to reduce bird deaths.”

Rhode Island-based Deepwater Wind is a case in point. Voluntarily, the firm incorporated several years of bird survey data in its pre-construction planning for the Block Island Wind Farm, looking to identify risk areas for birds on the move. Aileen Kenny, the firm’s vice president of permitting and environmental affairs, says they plan to monitor the site for at least five years, watching for the impacts the turbines are having on the birds.

The Block Island project sets a precedent when it comes to environmentally sensitive offshore wind development in the United States. But as more wind firms race to build turbines in what is, at least for now, a largely unregulated offshore landscape, it’s anyone’s guess whether this sense of stewardship will persist. Spiegel isn’t making any projections, but he hopes the tracking data collected over the past few years will foster more collaboration between wildlife managers and wind developers.

“We’ve made decent progress, but it has to continue,” he says. “We have a real opportunity to work together and be proactive about trying to minimize impacts of the technology on wildlife.”