Some butterflyfish have potent antipredator armament, including dorsal and pelvic spines. But others have adapted to life within the protection of coral reefs, and have lost their physiological defenses. Photo by Georgette Douwma/Minden Pictures

Evolution is often described as an arms race, with predators brandishing ever more effective weaponry against prey’s increasingly upgraded defenses. But what happens when the battleground itself—the environment—suddenly changes? For many fish species that reside in and around coral reefs, that is the future they face.

Sea level rise, ocean acidification, and warming are degrading and killing coral reefs around the world. One recent analysis suggests that without substantial reductions in global carbon emissions, all 29 coral-containing World Heritage Sites will cease to exist as well-functioning ecosystems by the end of this century.

For the marine organisms that have evolved to depend on coral reefs as part of their survival strategies, the consequences will be severe. As new research shows, some reef fish, including many species of butterflyfish, have outsourced their protection to the reef. When their physical sanctuaries crumble, these fish will be left unprotected.

There are roughly 130 species of colorful, coral-roaming butterflyfish. In general, these fish fall into two categories when it comes to their feeding tactics. Some gently graze on coral polyps, while others leave the safety of the reef to hunt prey on the seafloor. Evolutionarily, butterflyfish started out as hunters, but over the past 30 million years or so, certain species started to graze on and live within the corals.

According to Jennifer Hodge, an evolutionary biologist at the University of California, Davis, the change in lifestyle led to a shift in the fish’s physiology. In giving up the hunting lifestyle, grazing butterflyfish traded their armored hunter bodies for squatter, more mobile ones fit for hiding in coral reef crags.

“Our findings constitute the strongest evidence to date that corals have influenced the evolution of fish morphology,” Hodge says. “Without the protection of corals, some species would be much more vulnerable to predation.” 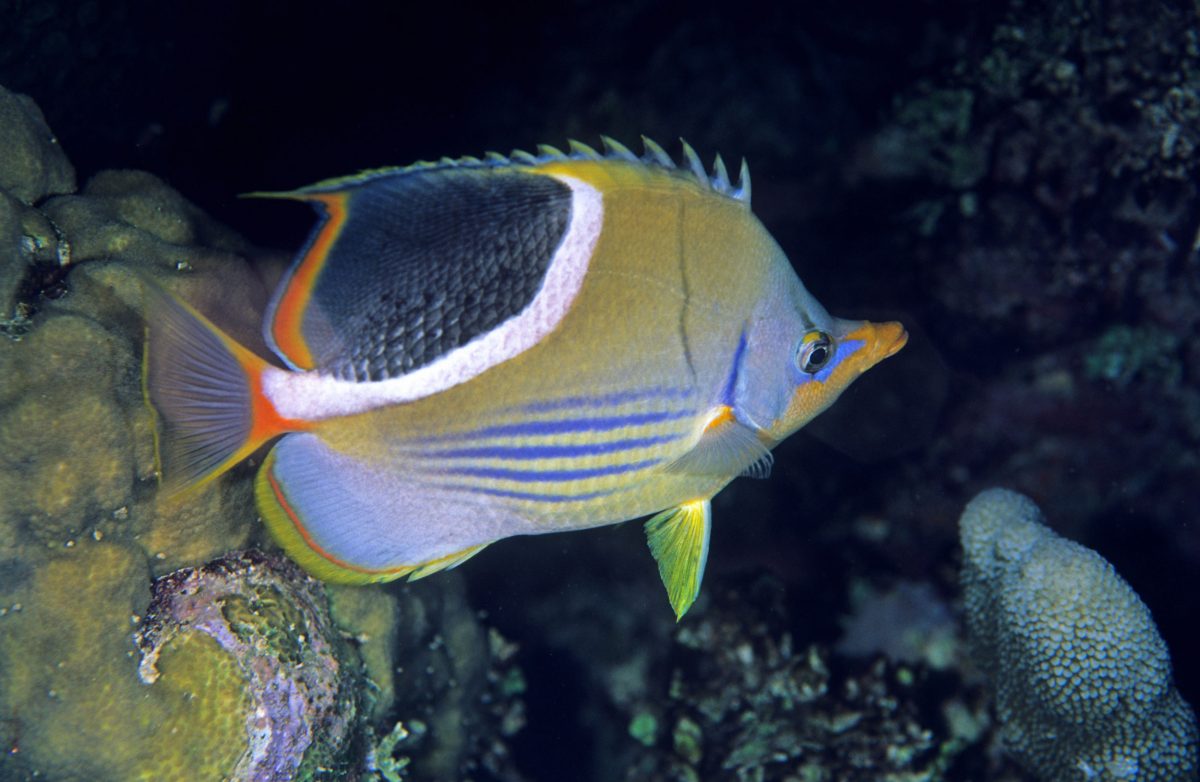 Some butterflyfish species are still hunters and retain the defenses required for life away from the reef. Photo by Colin Marshall/Minden Pictures

It’s difficult to study the evolutionary relationship between predation risk and antipredator defenses, but Hodge and her colleagues did so by analyzing fossil evidence–quantitatively measuring how different butterflyfish species changed with their environments and behavior.

Hodge and her colleagues started with an assumption: that grazer butterflyfish and hunter butterflyfish would have different physiological defenses. The hunters, which venture out alone and put themselves at a much higher risk of predation, would have maintained stronger defenses than grazers, which gradually embedded themselves in the reef where hiding places abound.

To test the hypothesis, Hodge and her team collected 351 fossilized butterflyfish representing 87 species and statistically analyzed their physical attributes alongside their foraging behavior. And indeed, they found a steady evolutionary split from one feeding type to the other.

Coral grazers, they found, tend to have smaller and less-sensitive eyes. Grazer butterfly fish are also shorter than hunters—a change that makes them fit more easily in a predator’s mouth. Their dorsal fin spines are up to seven times smaller than the hunters. Their longest spines have also evolved to be farther away from the mouth. This allows for easier grazing and makes it easier for the fish to navigate the tight corridors through coral reefs, Hodge suspects. At the same time, these changes leave the fish much less protected against predators.

Callum Roberts, a marine conservation biologist at the University of York in the United Kingdom not associated with the research, says he has witnessed how the disappearance of coral reefs has caused reef-dwelling fish species to vanish. This study highlights another reason why the loss of coral reefs could disproportionately affect some species. It “just goes to show that the wonderful complexity of coral reefs is even deeper than we thought,” he says.

The demise of coral reefs may mean the demise of grazer butterflyfish, though they do have tricks that may help them survive. They have more rounded tail fins, for instance, allowing them to duck and weave among the corals to escape predators. Hodge says it’s too early to tell whether this will give them any real benefit if the coral reefs disappear.