Atlantic haddock larvae, such as this one shown through a stereomicroscope, don’t just float at the mercy of the currents. New research shows they can orient into a current and swim to stay in place. Photo by A. Cresci

When fish are eggs and larvae, they’re considered planktonic, meaning that they drift with the current. But a new study of Atlantic haddock larvae adds to growing evidence that this definition doesn’t always hold water. Instead, these plucky plankton seem to use an internal compass to orient, and swim, against the flow.

It isn’t unusual for creatures, particularly birds, to have and use a biological compass. A few aquatic organisms, including salmon, sea turtles, and reef fish, have been found to use magnetic cues to navigate vast distances. This navigational strategy makes sense since there are very few visible cues for position underwater—it’s hard to see far, and the environment looks much the same from one place to another. But documented cases among fish larvae are extremely rare.

In the North Sea, haddock tend to stay close to their spawning grounds, around Scotland’s Shetland Islands. “[That] shouldn’t be the case, if the larvae were just carried by the current,” says Alessandro Cresci, a graduate student at the University of Miami and the Institute of Marine Research (IMR) in Norway. This raised a question: why do the larvae of the fish not drift away from the adults?

Cresci and his colleagues had experience working with magnetic compasses; a few years ago, they reported that glass eels use the Earth’s magnetic field to help navigate toward the coast. They wondered if haddock larvae were being guided similarly.

The group set about testing their theory in the waters to the northeast of Austevoll Research Station, one of the IMR’s outposts. They put haddock larvae into a circular, transparent compartment called a drifting in situ chamber (DISC) along with a GoPro camera. After setting the DISC adrift, the camera footage showed that more than 90 percent of the larvae—out of a total of 59 tested—oriented themselves toward the northwest and swam in that direction. 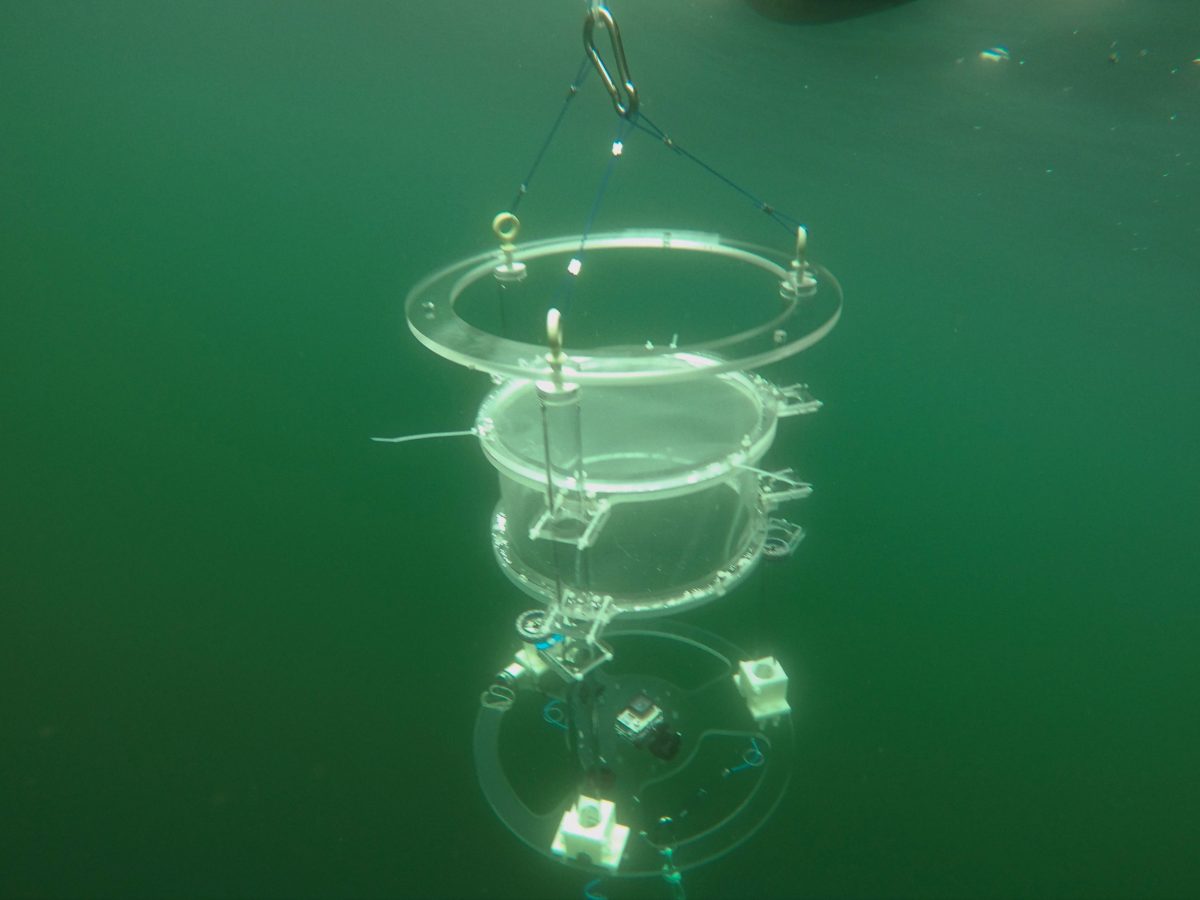 To test how haddock larvae react in currents, researchers placed them in a drifting in situ chamber in the North Sea of Norway. Photo by A. Cresci

Next, the team moved their experiment into the MagLab, located close to Austevoll Research Station, where they could observe aquatic animals in an artificial magnetic field, free from the influence of any water currents, odors, or celestial bodies that might influence the creatures’ navigation. In the MagLab, a circular tank of seawater about a meter high is surrounded by two electrical coils: one that nullifies the Earth’s magnetic field and another that creates a magnetic field in whatever direction the researchers choose.

Cresci repeatedly put a DISC with two haddock larvae into this tank and rotated the magnetic field by 90 degrees in a different direction. All but one of the 102 larvae tested decisively favored the northwest.

Cresci suspects that the larval haddock’s partiality for the northwest may be a clever strategy to avoid moving too far from their spawning grounds near the Shetland Islands. The currents in this part of the North Sea flow toward the southeast; orienting northwest might help the larvae oppose currents that would otherwise drag them into the Norwegian Deep.

“This new study is adding to the growing evidence that many small animals can take a role in determining where it is they actually travel,” says Kenneth Lohmann, a biologist at the University of North Carolina at Chapel Hill who is not affiliated with the study. For instance, larvae of coral reef fish have also been found to use magnetic cues. These “plankton” aren’t so planktonic after all. “They’re not just at the mercy of the ocean currents,” Lohmann notes.

Cresci’s team plans to expand their research to look at adult and larval haddock from other locations, as well as cod. Each may orient in different directions, perhaps to counter their own local currents or to find their way to breeding grounds. Cresci says that such information about how larvae and fish navigate is important for working out how and why stocks are where they are, which in turn can help guide management and conservation policies.