The waterwheel sits where the Jones Falls river flows into the Inner Harbor. Photo by Andrew David Thaler

Over the past five years there have been a plethora of proposals for ways to purge plastics from the oceans, from bioremediation (the use of genetically engineered microorganisms that eat plastic), to globe-spanning trawling operations to sweep ocean plastics from surface waters. Despite the hype, none of these projects have delivered on their promises (and most are wildly unfeasible). Or, we should say, almost none. One technological fix—Baltimore’s waterwheel—seems to be working.

On May 9, 2014, Baltimore’s Inner Harbor got a new addition when a barge carrying a creatively camouflaged waterwheel was placed at the mouth of the Jones Falls river. Hidden beneath the barge’s stylish awning is an innovative system for drawing garbage out of the water, a contraption that exploits the geography of the greater Baltimore area to stem the flow of trash into the Atlantic Ocean.

Baltimore’s garbage wheel is deceptively simple. A span of containment booms stretches across the Jones Falls river directing trash toward the wheel. Rakers gather the trash and draw it onto a conveyor belt, which lifts the garbage out of the water and drops it in a floating dumpster. Once the dumpster is full, a crew floats it away for proper disposal and delivers an empty one.

The waterwheel is powered by the river. When the water stagnates, solar panels and batteries can run the wheel for a week. With the exception of people having to retrieve the dumpster, Baltimore’s garbage wheel is self-powered and self-sustaining.

The waterwheel may be simple, but it is effective. In the past 12 months, the wheel collected almost 145 tonnes of trash from the Jones Falls watershed, including more than four million cigarette butts and nearly 100,000 plastic bottles. For comparison, the Ocean Conservancy’s International Ocean Cleanup Day recovered half as many cigarette butts and ten times as many plastic bottles in an event that mobilized nearly 650,000 volunteers. 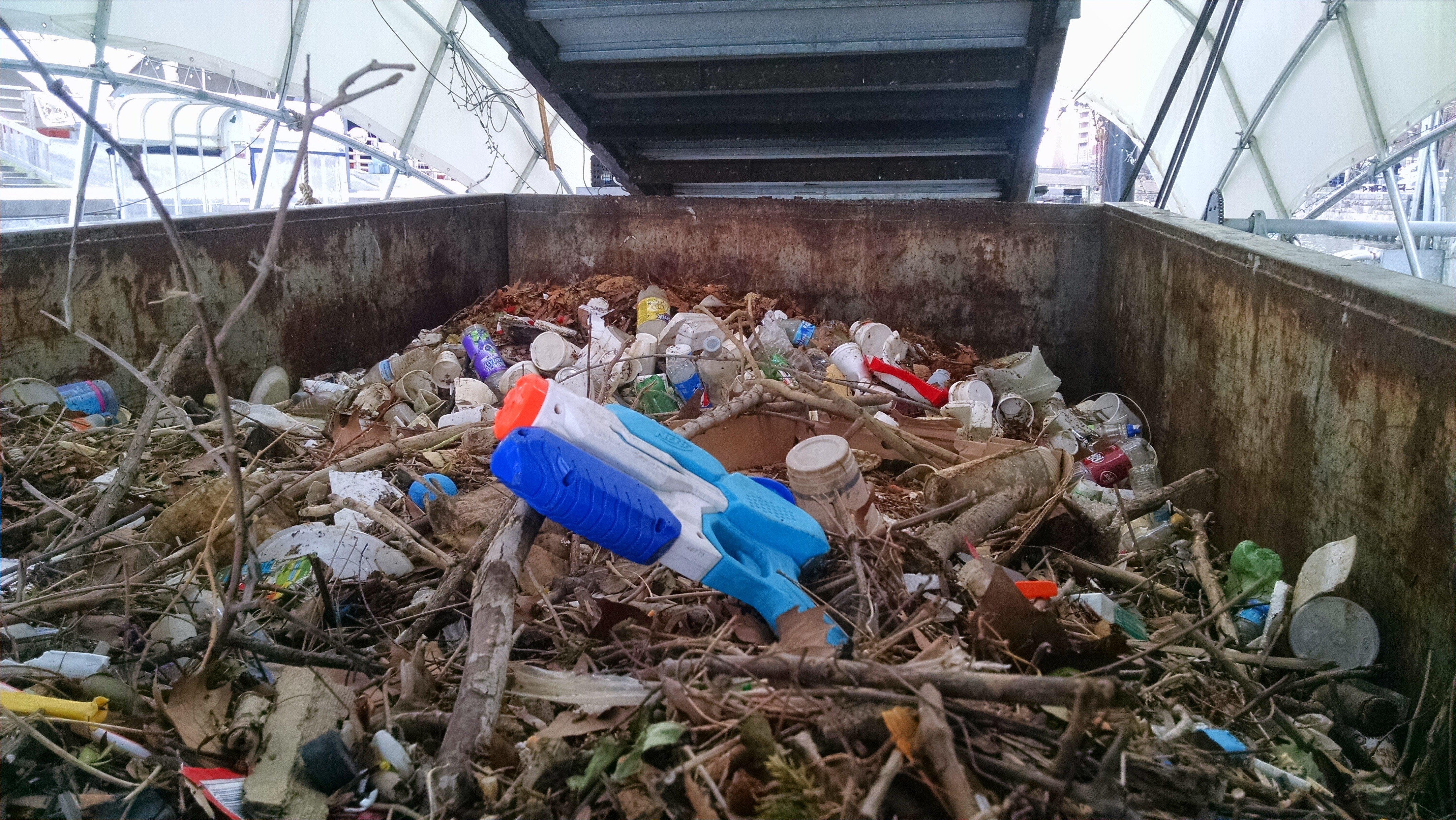 Among the more interesting things pulled out of the water: a beer keg, a tire, a bunch of children’s toys. Photo by Andrew David Thaler

The financial benefit to the City of Baltimore is equally impressive. In 2013, before the wheel was built, Baltimore’s Department of Public Works collected 36 tonnes of trash per month from the Inner Harbor at a cost of more than US $3,000 per tonne, says Adam Lindquist with the Waterfront Partnership, the group that maintains the wheel. In its first year, the waterwheel collected 14 tonnes per month at $440 per tonne. The wheel cost $850,000 to build and install, says Lindquist, and it saved the city almost half a million dollars in its first year. As a bonus, the waterwheel also skims oil off the water’s surface, preventing yet another potential hazard from making it into the Inner Harbor.

Baltimore’s waterwheel succeeds where so many other plans fail because it confronts one of the dominant problems with plastic pollution—if plastic reaches the ocean, it’s already too late for effective intervention. Even at optimum efficiency, an ocean-based plastic cleanup would reach less than one percent of global plastic; the rest is out of reach in the deep sea. Even if it can be picked up, photodegraded plastic in the ocean will have already done significant damage, leaching an alphabet soup of organic pollutants—PCBs, PAHs, BPAs, to name a few.

The garbage wheel, in contrast, exploits the natural bottleneck that is Baltimore’s largest watershed. Eighty percent of all trash that reaches the Inner Harbor travels down Jones Falls. Baltimore’s engineers turned the river’s catchment area into a massive, multimillion-acre collector that sends garbage straight toward the wheel.

There’s an elegant seasonality to the flow of trash through the Inner Harbor. A lot of garbage gets trapped in Baltimore’s heavy northeastern snow, only to be released with the spring melt. Garbage levels surge during heavy rainfalls, but the increased flow also brings power to drive the wheel, so the system adapts.

The waterwheel isn’t perfect. It can’t collect microbeads, a popular scrubbing agent used in many personal hygiene products, and light, flimsy garbage, such as shopping and potato chip bags, often drifts past the booms. The waterwheel is a supplement, rather than a replacement, to existing cleanup programs. Phasing out single-use plastics is still the only guaranteed way to keep them out of the ocean.

But a year in, other cities are taking notice of Baltimore’s garbage wheel and there are plans to build trash-collecting wheels on the Anacostia River in Washington, D.C., and in several Brazilian cities, says Daniel Chase with the Waterfront Partnership. The waterwheel has proven itself a powerful and effective tool in the struggle against ocean plastic.