Fur seal bones are found in large numbers at archaeological sites around the Olympic Peninsula’s northwestern coast. The bones represent seals of both sexes and a range of ages. Photo by Design Pics Inc/Alamy Stock Photo

Access to vast and potentially lucrative ancestral fishing grounds is riding on the mystery of the Cape Flattery fur seal.

The ancestors of the modern-day Quileute and Quinault peoples of Washington State’s Olympic Peninsula hunted northern fur seals for food and furs, and past archaeological excavations along the peninsula’s northwestern coast unearthed a trove of seal bones representing all stages of life—from pups to adults. But the fact that no breeding rookery for northern fur seals could be found on the Olympic Peninsula had scientists scratching their heads—where did the bones come from?

In 2002, the quandary led some researchers to posit that the region had been home to a unique population of fur seal—maybe even a distinct species—that gave birth in kelp beds, similar to how sea otters do, rather than on rookeries. They dubbed the animal the Cape Flattery fur seal. The case, it seemed, had been settled.

More recently, however, mounting evidence has called the existence of the Cape Flattery fur seal into question. University of British Columbia marine mammal biologist Andrew Trites argues that there was nothing extraordinary about the ancient bones—they were the same species as every other northern fur seal—only that they hailed from California.

Other than their time spent on breeding rookeries, northern fur seals forage offshore. Trites’s theory suggests that their migratory nature meant that fur seals would have been in the vicinity of Cape Flattery as they traveled in the California Current at the edge of the continental shelf.

Solving the mystery of whether or not there was a population of fur seal unique to Cape Flattery has important legal ramifications for the rights of the modern Quileute and Quinault to continue to harvest from their traditional waters.

In 1856, the two tribes signed the Treaty of Olympia with the US federal government. The treaty entitled the Quileute and Quinault to fish at all “usual and accustomed grounds and stations.” Knowing whether the bones came from an animal that ventured closer to shore to give birth in kelp forests, or one that traveled farther out to sea, will help determine the extent of the traditional fishing grounds.

While the tribes today don’t plan to hunt fur seal, their right to harvest at their accustomed grounds is not tied to a particular species. Proving that their ancestors historically ventured to the edge of the continental shelf in search of fur seals would give them access to valuable commercial and subsistence fish stocks within that same band of ocean.

These rights are currently being tested in the US courts. In 2009, the neighboring Makah tribe of the northern Olympic Peninsula opened a case challenging the extent of the Quileute and Quinault’s fishing grounds.

Trites was pulled into the legal proceedings in 2014 and testified as an expert at the request of the Quileute and Quinault. On April 2, 2017, he presented the results of his findings on the existence—or not—of the Cape Flattery fur seal at the Society for American Archaeology annual meeting in Vancouver, British Columbia.

“It’s ridiculous—a fairy tale. As a biologist, it doesn’t make sense,” he says.

Victoria archaeologist Susan Crockford and two colleagues in 2002 offered the hypothesis for the Cape Flattery fur seal’s existence. The presence of the bones of pups, as well as the bones of mature bulls, in the middens were central to their theory. Bulls don’t venture far from their rookeries. In Alaska’s Pribilof Islands, for instance, one of the largest northern fur seal colonies, bulls stay in the Bering Sea, closer to their rookeries, and don’t migrate as far south as the females and juveniles. Crockford argued, therefore, that the bones of the bulls found in the middens must have come from breeding activity close to Cape Flattery.

Crockford’s theory also relied on historical accounts from the sealing industry. In some cases, hunters reportedly slaughtered fur seals that were so close to giving birth that pups pulled from them survived and could even swim.

She served as a consultant to the Makah in the court case but was not called to testify as an expert witness.

Trites contends that Crockford’s idea doesn’t make sense. All pinnipeds, including fur seals, give birth on land or ice—not in kelp beds—he says. Newborn pups lack the blubber to survive in the frigid ocean until they’re a few months old.

Besides, there’s no need to debate a potentially new species of seal with such unique adaptations when the Olympic Peninsula seal bones can otherwise be explained. 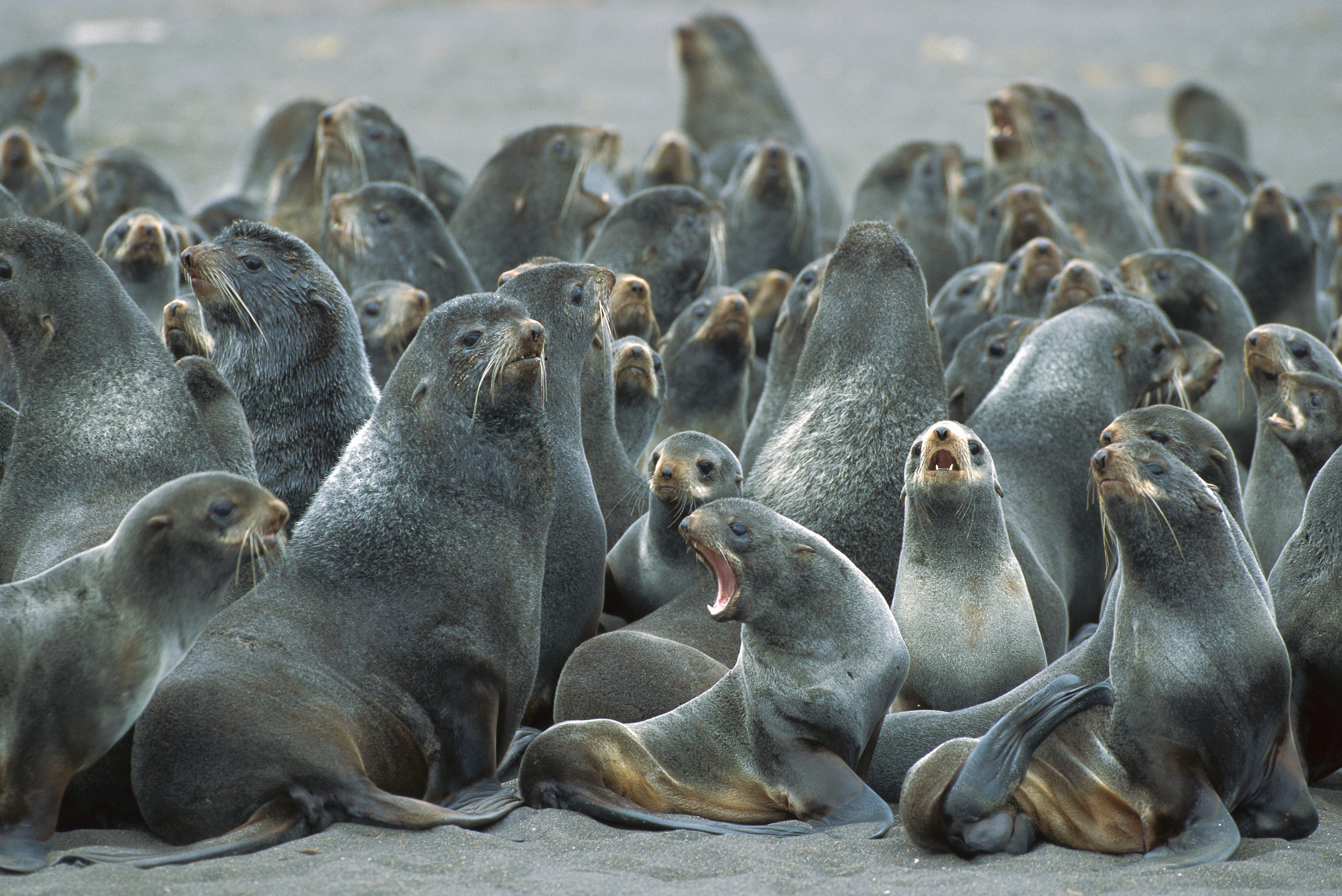 Andrew Trites argues that the fur seals once hunted off the Olympic Peninsula were a population from California’s Farallon Islands. Photo by Yva Momatiuk and John Eastcott/Minden Pictures

Poring through records of the historical seal skin trade, Trites was struck by reports of a Russian sealing station that had been in operation in the Farallon Islands, off San Francisco, from 1812 to 1840. The Russians closed the station in 1841—15 years before the Treaty of Olympia—after they’d decimated the local fur seal population to the point where a commercial enterprise was no longer feasible.

Trites theorizes that the vast majority of fur seal bones found in the middens near Cape Flattery came from seals that were born on a rookery in the Farallon Islands. That would explain the presence of the bones of large bulls and young seals. Some of the latter might have been from those unborn pups pulled from their mothers during sealing, while other young seals may have recently weaned and been swimming past the Olympic Peninsula on their annual migrations, keeping to the California Current.

“Each year, it was like herds of wildebeest swimming predictably past the coast,” Trites says. He argues that seafaring Quinault and Quileute hunters would not have known exactly where the seals were originating, but they would have known about the abundant supply of reliable food.

Hunters, says Trites, would have set forth at 2:00 or 3:00 a.m. in dugout canoes outfitted with sails and proceeded up to 50 kilometers or more offshore to “the shelf break, a blue-water Serengeti.”

Stealth was key to their success; hunters speared fur seals while the animals slept at the surface. “No GPS, no life preservers or survival suits, no coast guard to come get you. They had to be incredibly tough but also very knowledgeable about the ocean,” says Trites.

In 2015, US district court judge Ricardo Martinez sought to settle the dispute between the Makah and the Quinault and Quileute. Martinez found Trites to be a credible witness on the “continuity of fur seal biology and behavior,” and ruled that the “alternative nearshore rookery theory is based on speculation rather than evidence.”

Crockford, for the record, remains unconvinced, saying Trites may know live fur seals, but she knows her bones. “He doesn’t have the depth of information that he needs. The kind of thing he’s suggesting absolutely needs more proof,” she says. Crockford notes she is also educated as a zoologist.

The judge further ruled that the Quileute and Quinault’s fishing grounds extend to where they had historically harvested marine mammals.

The Makah are set to appeal the decision, and that case is expected to be heard in Seattle, Washington, this June—although the tribe is not disputing the court’s specific finding on the existence of the Cape Flattery fur seal.

So after all those years of scientific speculation, is the existence of the Cape Flattery fur seal just a myth? Trites is convinced that’s the case. “It’s just a phantom,” he says. “It never existed.”