For many British Columbia indigenous communities, marine creatures like salmon are important culturally, as well as economically. Photo by Andy Clark/Reuters/Corbis

Seafood has sustained the First Nations of British Columbia for millennia. The annual migration of Pacific salmon, in particular, is lifeblood. Each year, millions of salmon swim and leap their way up major river systems such as the Fraser and Skeena all the way to landlocked communities in the province’s interior. But now, climate change is threatening to strike at the heart of those time-honored connections by pushing marine life farther north in search of cooler waters.

As a new study warns, “unprecedented climate change poses a considerable threat” to First Nations’ food, cultural, and economic values. By 2050, aboriginal catches are expected to decline significantly, depriving indigenous people from 16 coastal communities of up to CAN $12-million annually in commercial fisheries, the study shows.

Warming and changing oxygen concentrations in the ocean, spurred on by anthropogenic climate change, will send marine life swimming northward at an average rate of about 10 to 18 kilometers per decade. For the 98 fish and invertebrate species studied, this will equate to an average drop in annual catches of 4.5 to 11 percent, with the declines being much higher for certain species.

The study shows that two critical species will suffer the greatest declines: salmon by 17 to 29 percent; and their prey, herring, by 28 to 49 percent. Catches of green sea urchin could shrink by as much as 36 percent, flounder and sole by 30 percent, shrimp and prawns by 18 percent, and halibut by 13 percent.

Aboriginal groups located in British Columbia’s more southerly waters are expected to suffer the greatest catch losses: up to 27 percent for the Tsawwassen First Nation near the Canada-United States border, compared with 6.6 percent for the Haida First Nation off the province’s north coast.

The study projections are shocking to First Nations people such as Tracy Winbush, an executive member of the First Nations Fisheries Council of BC. “It’s a fearful thought, it really is. Climate change is such a big issue,” she says. 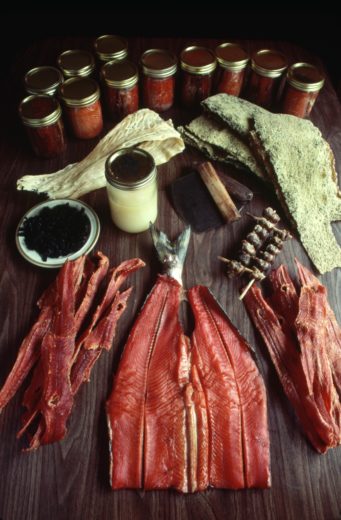 Annual salmon runs are critical to many of BC’s aboriginals. Frozen whole, canned, smoked, or dried on wind-blown racks such as those in the semi-arid Fraser Canyon, they provide an economic and nutritional food source lasting all winter. With less salmon, indigenous communities may have to resort to more expensive and less healthy store-bought foods or turn to other wild foods such as deer with unknown consequences on those populations.

While the study looked at the effects of declining catches on coastal First Nations, interior peoples reliant on migrating salmon (salmon left after communities farther downriver have taken their share) also stand to suffer greatly.

Winbush is typical of aboriginal people living in Merritt who drive to the Fraser Canyon to harvest salmon because of already diminished stocks in the local Nicola River system. She laments a century of human-caused impacts that have harmed the fish, starting with the Hell’s Gate rockslide during railway construction in 1913, along with poorly regulated and toxic industrial developments, and large-scale commercial fishing. Yet the latest projected declines from climate change may be the most challenging threat of all.

Dick Beamish, an emeritus federal fisheries researcher, says the results are consistent with other related findings on climate change. But he cautions that one of the underlying assumptions of the research is that current fish distributions are based on water temperature, when they may actually be influenced by food availability or ocean currents. He notes that the cascading effects on the ecosystem from the loss of key species will also affect a long list of marine predators. And, he cautions natural climate trends may temper or amplify the effects of anthropogenic warming.

Potential solutions to the looming crisis include global commitments to reduce greenhouse gases under the 2015 Paris Climate Conference, joint management of key marine resources with First Nations, reduced fishing pressure on species at greatest risk, and restoration and enhancement of existing habitats.

“It can’t just be First Nations doing their best,” Winbush concludes. “It’s all of us—everyone will be affected by the loss of these fish and the economics they bring in.”