Seal bombs are small explosive devices that fishermen use to scare predators away from their catch. Photo courtesy of Anna Meyer-Loebbecke

The sound carries for kilometers underwater and the passing blast waves feel like a punch to the chest. To dodge the painful noise, scuba divers in Monterey, California avoid the water when the anchovy and squid fleets are out.

“We just look off the beach, and if we see the boats we go somewhere else,” says Keith Rootsaert, a recreational scuba diver.

Rootsaert is among a small but vocal group of conservationists and researchers raising concerns about commercial fishermen’s use of “seal bombs.” These explosives—comparable to small sticks of dynamite—scare off seals and sea lions that might otherwise raid fishing nets. They also annoy divers and potentially harm other species, particularly whales.

“I would think it’s a violation of the Marine Mammal Protection Act,” Rootsaert says. “You’re not supposed to approach seals and sea lions, and here you have guys throwing dynamite at them.”

But the practice is lawful. The Marine Mammal Protection Act specifically allows fishermen to use non-lethal measures “to deter a marine mammal from damaging the gear or catch.”

Philip Sammet, a professional diver and boat captain, says he’s heard seal bombs roughly a dozen times while underwater. “They are loud—it’s an explosive, painful sound,” he says. “You can feel the pressure waves hit you in the chest. And it doesn’t matter if it explodes next to your head or a mile away—it sounds the same.”

On one occasion, Sammet says an explosive went off within a hundred meters of him, when the crew of a commercial squid boat intentionally shelled the water in what he says was a hostile effort to drive him and several other divers out of the water.

Divers are unnerved by the seal bombs, but the area’s whales may be experiencing physical damage. Simone Baumann-Pickering, a researcher with the Scripps Acoustic Ecology Laboratory, has spent the past several years working with graduate student Anna Krumpel to study the effects of noise on whales. Between 2005 and 2016, hydrophones fixed to buoys along the coast of Southern California detected upward of 37,000 explosions per month during peak fishing seasons—sometimes as many as 500 an hour. “The amount of use is alarming,” says Baumann-Pickering. “We know the noise poses a potential threat.”

In 1989, scientists with the US National Oceanic and Atmospheric Administration’s Southwest Fisheries Science Center conducted a rudimentary experiment, detonating seal bombs near submerged dolphin carcasses. The scientists saw severe impacts—shattered bones and pulverized muscles—from detonations within half a meter.

Though the recent research from Scripps has not documented seal bombs physically harming wildlife, the explosives’ potential effects should not be underestimated, Baumann-Pickering says. The researchers estimate that whales and dolphins can hear seal bombs from as far away as 80 kilometers. It’s reasonable to assume this noise is affecting them, she says. But she and Krumpel have struggled to put a numerical assessment on any effects, essential to proving the explosives are harmful.

Without concrete data to discourage their use, seal bombs persist—along with anecdotal evidence from people on either side of the argument. 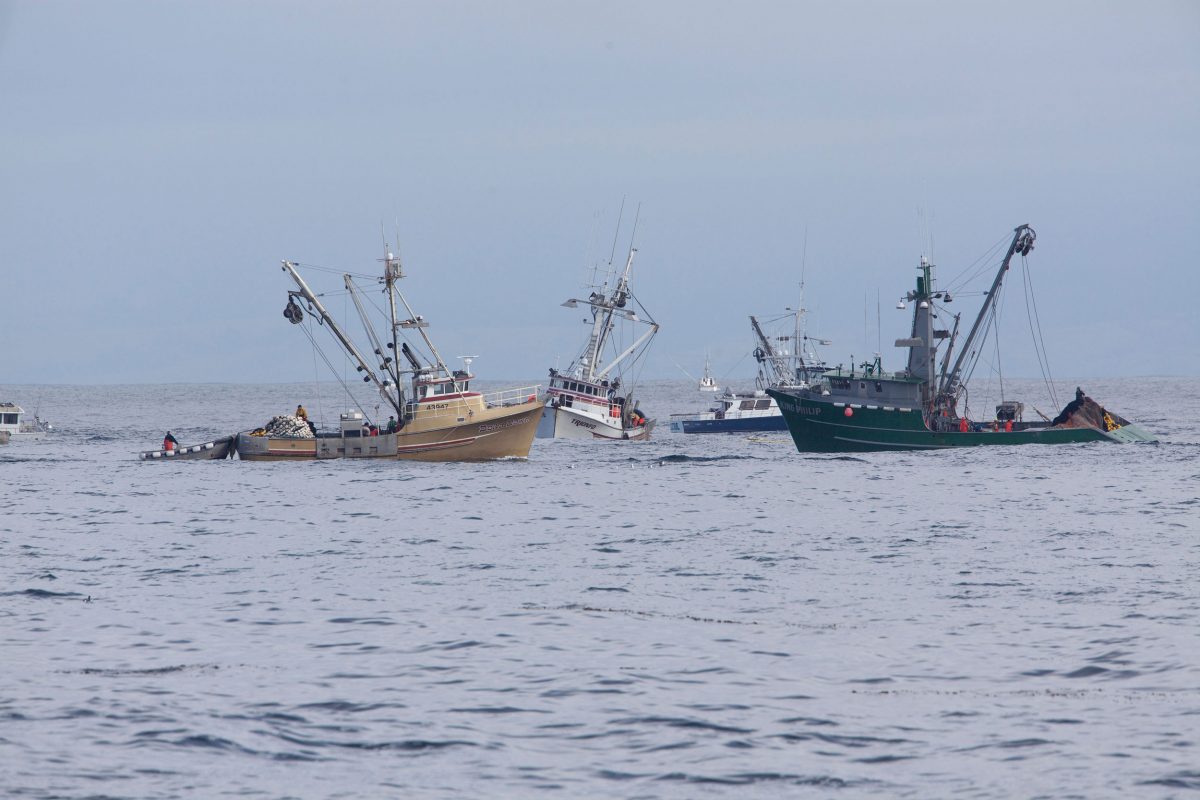 Using seal bombs to deter marine mammals is legal, though using them to round up target species is not. Photo by Kip Evans/Alamy Stock Photo

One squid fisherman based in Los Angeles says using the bombs is a vital part of his work. Besides, he says, he’s seen no sign that whales or porpoises are bothered by the bombs—especially Risso’s dolphins, frequently encountered near squid schools. “Those things show no response at all to the seal controls,” he says.

Several months ago, he and his crew were attempting to wrap a net around a school of yellowfin tuna near San Clemente Island, off Southern California. A humpback whale was swimming above the tuna, and no amount of explosives detonated in the water could get the whale to move.

“I threw a couple of bombs right next to it, and it had no effect at all,” he says. “Like it didn’t even notice.”

Baumann-Pickering says such a response in a whale could mean a variety of things: the whale may be willing to put up with annoying noises if there’s an abundance of prey. Or, she suggests, the whale might have already been deaf.

Sport divers and whale watching skippers in Monterey, however, say that seal bombs have driven humpback whales away from prime foraging spots near the coast. Nancy Black, the owner of a local whale watching tour company, says that in October 2015 dozens of humpback whales had gathered in Monterey Bay to feed on dense schools of anchovies. Each night, she says, fishing boats convened on the activity, working their nets and detonating explosives, and by dawn each new day, the whales had dispersed.

“The only reason they would do that is if something scared them off,” Black says.

Sammet, the diver, says he’s seen the same correlation: when commercial seiners begin fishing and bombing the water, the whales split, he says. He’s quick to add that it isn’t clear that seal bombs, specifically, caused the whales to leave. “It could also be that a 100-foot boat pulling up and throwing nets in the water, even without using seal bombs, would scare the whales off. We don’t know, but the seal bombs don’t help.”

There are limits to the legality of using seal bombs. For instance, it is illegal to use explosives to corral target species. But it does happen. In 2013, an Alaskan fisherman was fined for using explosives to drive salmon into his net. The commercial squid fisherman says in California it is routine for fishermen to use seal bombs to condense schools of small fish and squid into tight balls, which makes them easier to catch.

“The noise seems to make the squid move up from the bottom toward the surface,” he says.

When asked, officials with both the California and the US federal governments say they do not know how many fishermen are using explosive deterrents, or whether they’re being used appropriately.

“It would be impossible to watch every fisherman using an explosive device,” says Robert Anderson, a pinniped expert with the US National Marine Fisheries Service. “It falls on you as a fisherman to make sure you’re in compliance with the law.”

Krumpel is currently studying the effects of explosives on Risso’s dolphins, which feed almost exclusively on squid. While some fishermen are convinced seal bombs don’t harm the dolphins, Baumann-Pickering says anecdotal observations hardly settle such matters.

“In science, you have to measure the effects,” she says.