A controversial habitat restoration program could give a boost to the survival of vulnerable chinook salmon. Photo by Peter Mather/Minden Pictures

California, land of almonds, avocados, and Arnold. But beyond its famous edibles and a celebrity governor, California, like its Pacific Northwest neighbors, is also a salmon state. At least, it will be again if salmon advocates have their way.

In the state’s Central Valley, researchers Jacob Katz and Carson Jeffres have spent the past seven winters along the Sacramento River. They have slogged through muddy fields and marshes, netted fish, tagged some with tracking devices, and released them into the water. Katz is a biologist with the nonprofit organization California Trout, and Jeffres is an ecologist with the University of California, Davis. The duo has been gathering evidence to rationalize making a fundamental change to California cropland.

They believe that by carving notches into several key levees and allowing the Sacramento River to routinely flood the surrounding farmland, they can re-create essential natural habitat for the river’s wild chinook salmon, which have plunged from historical levels. Biologists believe between one and two million adult chinook once spawned every year in the Sacramento and San Joaquin Rivers, which merge several kilometers inland of San Francisco. Dams and levees, which channel rivers and prevent natural flooding cycles, and diversion of rivers into farmland, have drastically reduced the chinook population. Today’s spawning returns number several hundred thousand at best. But Katz and Jeffres believe restoring the Central Valley’s floodplains will bring back the fish.

Through several years of research, the pair has found that cropland inundated for just a few weeks with river water becomes ideal habitat for juvenile salmon. As Katz describes it, large areas covered with shallow water function like a solar panel: sunlight hits the water, which then explodes with phytoplankton and invertebrate life. Finger-sized fish migrating toward the sea feast and grow fat on such floodplains. They also find refuge from predators, and their odds of reaching salt water improve, Katz says. “We lose this when we confine rivers between levees.”

Employing agricultural land as habitat represents a critical conservation challenge of the 21st century. “Integrating the human footprint with functioning ecosystems is how we have to move forward,” Jeffres says.

It sounds like a progressive, ecologically sound habitat restoration story, backed by organizations that can make it happen.

But there is a fundamental flaw in the plan: hatchery fish. A half-dozen Central Valley hatcheries capture adult chinook that have returned to the river system to spawn and manually combine their eggs and sperm in trays. Each year, these facilities release about 30 million young salmon into the wild, often trucking them to the ocean to boost their odds of survival.

It’s been a lifeline for California’s salmon fishery. But while hatcheries seem to be a fix in the short run, biologists warn they’re affecting the entire salmon population in profound ways. The underlying problem with hatcheries is that they have genetically altered salmon by rearing them, if only briefly, in an environment lacking natural selection forces.

“This basically creates a domesticated animal adapted to living in artificial environments, but not in the wild,” says fish biologist Peter Moyle at the University of California, Davis.

Because hatchery fish that reach adulthood pair up with wild salmon at spawning time, they compromise the genetics and fitness levels of the entire population, Moyle explains.

Hatcheries also tend to genetically homogenize salmon runs into populations of clone-like individuals with limited behavioral diversity—a direct result of low genetic diversity. This makes them more vulnerable to adverse environmental conditions. For example, a few months after birth, hatchery fish tend to migrate out to sea all at once, rather than across a larger timespan as wild fish do.

This had serious consequences about a decade ago, when a period of weakened ocean upwelling meant a shortage of phytoplankton and krill—food for baby salmon. So, when millions of hatchery-born chinook smolts reached the sea more or less in unison, they starved, and virtually the entire population was lost several years in a row. The runs crashed, bottoming out in 2009 and causing the first-ever emergency fishing moratorium that lasted for two years. 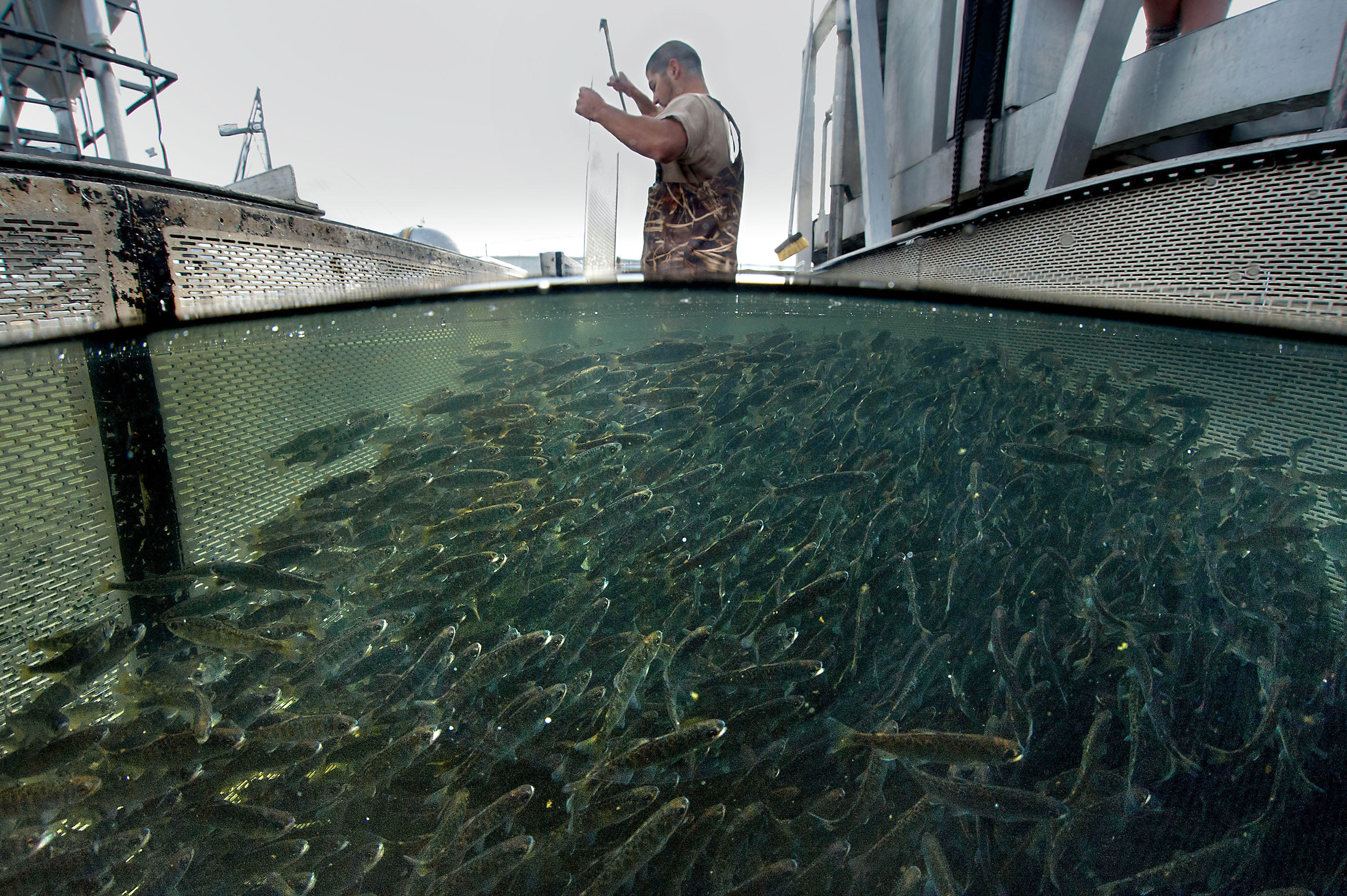 Even if the wild chinook salmon runs can be restored in central California, genetic diversity is at risk of being diluted by hatchery raised fish. Photo by ZUMA Press Inc/Alamy Stock Photo

The Central Valley’s chinook have rebounded thanks to better ocean conditions in recent years. However, degraded habitat remains a problem. So do hatchery fish, which far outnumber naturally born salmon and continue to threaten the viability of wild populations.

Hatcheries can cause other problems, too. Recently published research describes how hatchery salmon have overwhelmed small coastal streams in southeastern Alaska, depleting oxygen in the water and increasing the risk of death.

Moyle says survival rates of Central Valley hatchery chinook are declining. Eventually, so few fish will reach spawning age that hatcheries that rely on their sperm and eggs will be unable to continue operating.

But not all hatcheries are the same. So-called “conservation hatcheries” focus on carefully selecting broodstock and, through sophisticated systems, attempt to mimic natural selection processes on the juveniles. Brett Galyean, manager of northern California’s Livingston Stone National Fish Hatchery, says his facility’s staff go to great lengths to avoid inbreeding the Sacramento River’s winter-run chinook, which are nearly extinct.

“We get a genetic ID on every fish, and as we spawn them we can look at the spreadsheet and make sure we aren’t spawning related salmon,” Galyean says, describing a meticulous process meant to maintain this distinct population of chinook that has nearly vanished at least twice in recent history.

Moyle says it will take a combination of sophisticated hatchery programs, like Livingston Stone’s, and habitat restoration efforts, like that of Katz and Jeffres, to maintain salmon runs in California’s future.

Katz also believes in the two-pronged approach to preserving the state’s red gold, but he maintains faith in the power of wild rivers and remains optimistic. “We can have many more fish, more consistently and for less money, if we restore natural phenomena and natural processes,” he says.

Jeffres is convinced that having chinook salmon in one of the most populous regions in North America is possible and mostly a matter of social priorities. If cold water is allowed to flow freely on its way to the sea, the fish, he insists, will come back.

“It’s basically a question of whether we want salmon or not,” he says. “California is a salmon state. People are starting to forget that.” And that, he says, may be the greatest long-term threat the fish face.