The franciscana is one of the smallest dolphin species in the world. It lives in brackish river estuaries in Argentina, Brazil, and Uruguay. Photo courtesy of AquaMarina

A ghost haunts the coasts of southern Brazil, Uruguay, and northern Argentina. The franciscana, cousin to the Amazon River dolphin, is also known as the La Plata dolphin, for the river in which it was first sighted, and as the ghost dolphin, for its rarity. The franciscana is officially listed as vulnerable, although so little is known about the elusive mammal it may effectively be endangered.

A distant relative of river dolphins, the grayish-brown franciscana is slightly smaller than the average human. Similar to river dolphins, franciscanas have pronounced beaks, holding the record for the longest beak in proportion to body length. Distinct from true river dolphins, however, the franciscana prefers the murky, slightly salty waters of river estuaries. This limited territory puts it in frequent contact with fishermen, in whose nets the dolphins die. Although researchers along the franciscana’s territory work to conserve the species, too little is known to enact effective and comprehensive conservation strategies.

The most obvious barrier: scientists don’t even know how many of the dolphins exist. A census conducted in 2005 estimated that there were roughly 13,000 to 14,000 in Argentina, while a different survey in 2010 estimated a Brazilian population of slightly less than 2,000. Uruguay has no official census. The absence of population statistics complicates finding state aid to help protect the species.

Where scientists get a better look at franciscana numbers is through mortality rates from fishing by-catch. Alejandro Arias, a program manager at the Argentine NGO Vida Silvestre, estimates that 500 to 800 franciscanas die in Argentine fishing nets each year. An Uruguayan study from 2009 estimated a mortality rate of some 2,800 franciscanas per year. Given a birth rate of slightly under one newborn per female per year, this suggests the dolphin’s population is rapidly declining and may be much closer to extinction than its vulnerable classification implies.

Yet population isn’t the only facet of the franciscana’s existence that scientists know little about. 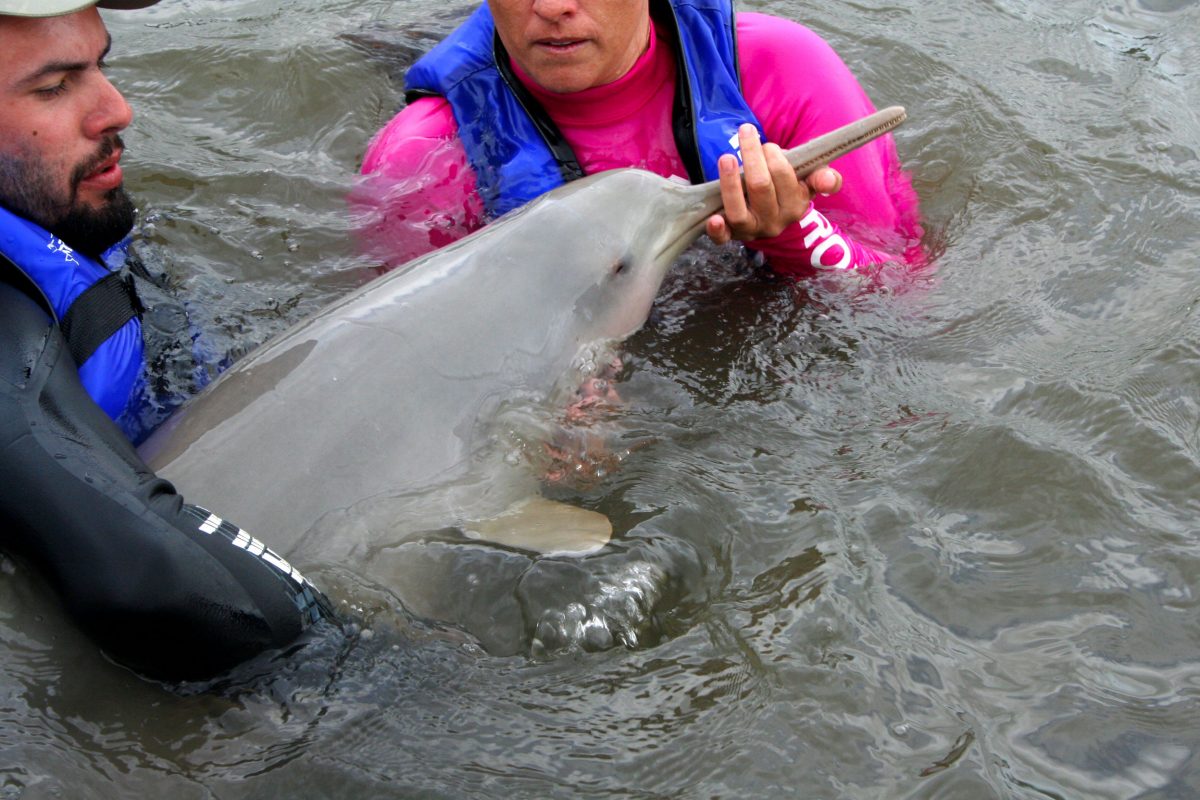 Scientists have a general understanding of the franciscana’s range and lifestyle, but lack a more rigorous knowledge of its population dynamics or how it fits into the wider ecosystem. Photo courtesy of AquaMarina

Conservationists often turn to the concept of ecosystem services to advocate for the conservation of a given species. Sea turtles, for instance, provide vital services to beach and shallow water ecosystems—effects that carry financially quantifiable outcomes for industries such as tourism and fishing. Coupled with the lure of adorable turtle hatchlings, this helps ensure that human and financial resources are devoted to sea turtle conservation, which in turn leads to political pressure for the turtles’ protection.

Too little is known about the franciscana, however, to clearly define its ecosystem services. Given its rarity and high rate of mortality, the damage done by its disappearance could already be underway.

These knowledge gaps all revolve around the lack of research. That governments do not prioritize the franciscana is partly due to an absence of public awareness regarding the dolphin, says Pablo Denuncio of Argentina’s National Scientific and Technical Research Council.

“To know is to conserve,” Denuncio says. If more people knew about the franciscana’s plight, they would pressure their local politicians to act. Publicizing the dolphin, however, has been a slow and uphill struggle. Simply put, the ghost dolphin is falling victim to its own scarcity.

Denuncio has experimented with alternative means of keeping the dolphins safe. One trial involved using acoustic alarms, called pingers, to train the dolphins to associate fishermen’s nets with danger. Their results show promise, though he lacks sufficient funds to fully deploy the pinger system. Paula Laporta, of Uruguay’s Universidad de la República, has watched these trials with interest and hopes that funds can be found to continue testing pingers in Uruguay.*

All along the franciscana’s coastal territory, fish stocks are declining and biodiversity is dwindling. Investments in new fishing infrastructure herald even greater stress on the coastal environment. Caught in the midst of it all, the unfortunate franciscana looks set to become more ghost than dolphin.

*Correction: The story originally said Paula Laporta was involved in the pinger research—she was not.