Sockeye salmon use streams and rivers as spawning and feeding grounds. Photo by Jason Ching/University of Washington

For Lindsey Bloom, who describes herself as a temporarily retired Bristol Bay fishing boat captain and mother of two, the saga over the proposed Pebble Mine—a copper and gold mine in southwest Alaska—has “been a roller coaster over the last 15 years” or so. The latest twist has been the most frightening, she says, as the current Trump administration has been rapidly removing obstacles to the project. Now, Bloom says a study published this week confirms her fears: it suggests US regulators have underestimated the mine’s threat to the salmon that live downstream.

According to Canadian-based Northern Dynasty Minerals Ltd., the mine’s parent company, the Pebble deposit is the world’s largest undeveloped stash of copper and gold—minerals used to produce essentials like electrical wiring and electronics. This deposit, however, lies beneath part of the practically pristine Nushagak River watershed—the headwaters of Bristol Bay, and the spawning grounds of five species of salmon, including sockeye. Valued at US $1.5-billion, the Bristol Bay sockeye fishery supplies roughly half the world’s wild sockeye.

In February, the US Army Corps of Engineers released a draft environmental impact statement (EIS) concluding the proposed mine would have negligible overall impacts on salmon and their habitats, or on salmon fisheries. New research from University of Washington ecologist Sean Brennan, however, shows that the approach used in the corps’ assessment, which relies on creating new areas of salmon habitat to offset areas affected by the mine, oversimplifies the situation.

“You can’t really carve that basin up into isolated habitat patches and assume that the [salmon] production of one habitat patch is going to be constant through time,” says Brennan.

The Nushagak River watershed is a dynamic environment with wild rivers, streams, and lakes that feed Bristol Bay. The ratio of snow to rain in a given year, for example, can interact with the local topography to change the water temperature and flow in different parts of the watershed—changes that can spell life or death for young salmon. 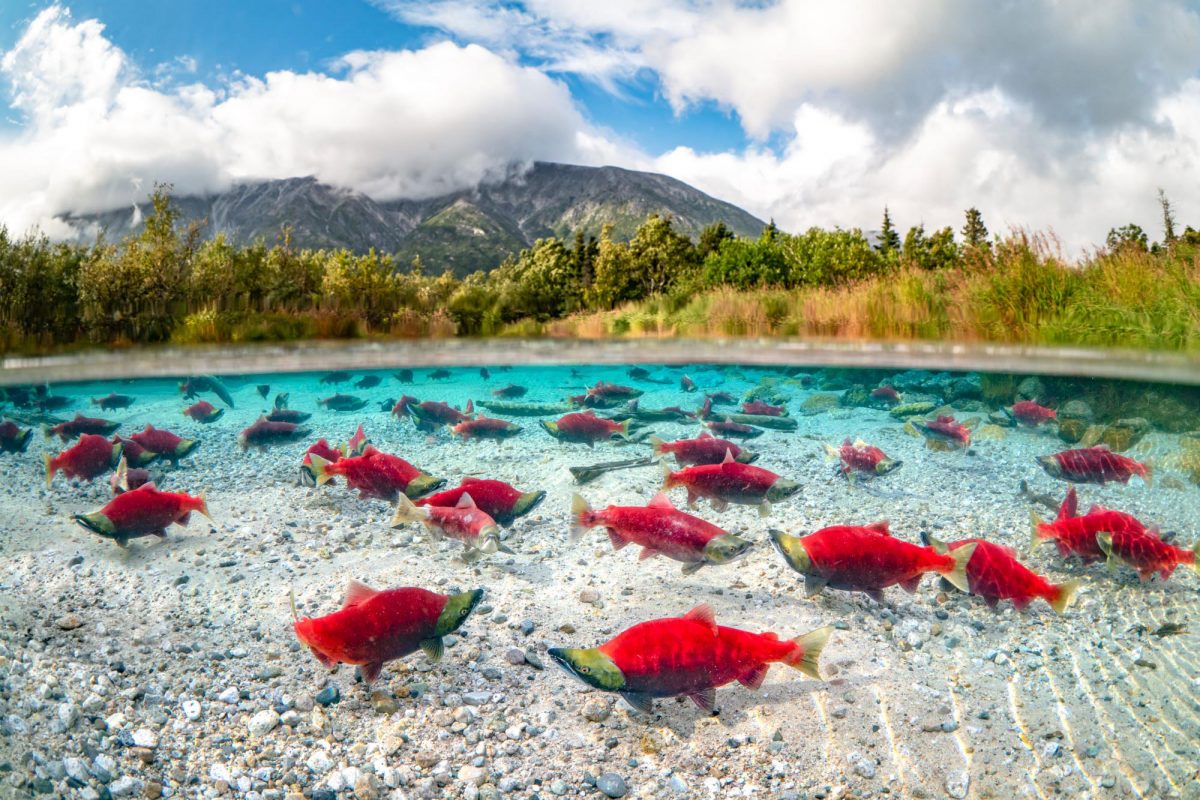 Adult salmon use freshwater habitats to spawn, and young salmon fatten up in them before embarking on their long journey out to sea. Photo by Jason Ching/University of Washington

Brennan’s study shows that there is no one key part of the watershed that can be isolated and protected as salmon habitat without potentially compromising overall salmon numbers. The whole system is important to the fish, if not all at the same time.

“Intact river systems operate as more than just a simple sum of their parts,” Brennan says. A mosaic of diverse and connected habitats ensures at least some salmon populations in the Nushagak watershed will find their optimal mix of conditions—both for spawning the next generation of fish, and for fattening up before embarking on the taxing and uncertain journey to sea.

To come to this conclusion, Brennan and his team studied the otoliths of nearly 1,400 chinook and sockeye salmon. These tiny stones inside a salmon’s ears add layers as the fish grows, much like growth rings in a tree. This record captures the chemical signatures of where in the watershed the fish lived and grew. The researchers matched those signatures with the distinct geochemical profiles spread across the Nushagak River watershed.

They found that in 2011, for instance, chinook numbers surged in the Nushagak basin’s northwestern corner. A few years later, the baby boom shifted eastward to another tributary.

Salmon production is “flickering on and off in different habitats at different times,” says Brennan. But in those same years, the best habitat might be entirely different for various sockeye populations, with some adapted to lakes and others to rivers.

Jessica Miller, a fisheries ecologist at Oregon State University who was not involved in the new study, commended Brennan’s team for taking a well-validated scientific approach and applying it “in the right place at a really critical time to an important population.” 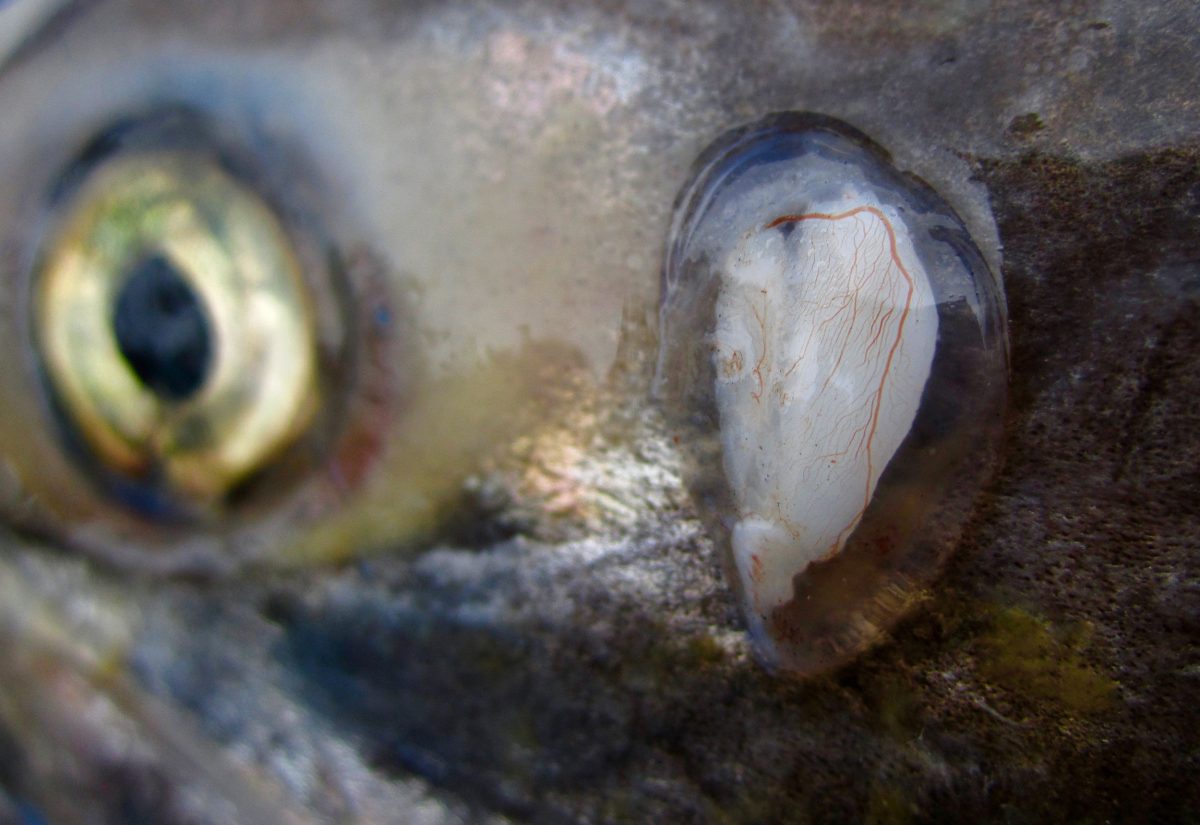 The otolith is a small stone housed within an endolymphatic sac in the fish’s ear. Minerals from the surrounding water flow past the otolith, leaving chemical traces. Scientists can use these chemical signatures to learn where salmon have lived throughout their lives. Photo by Sean Brennan/University of Washington

“Demonstrating the relative importance of different habitats is a really important challenge,” she adds. By taking a watershed-level view, “they can provide a real-world example of that.”

Bloom says she’s seen the salmon’s shifting use of the watershed herself, as she and other fishermen follow the booms and busts across the different waters draining into Bristol Bay. “You absolutely experience that firsthand, as the total runs for these rivers fluctuate over time. If you didn’t have somewhere else to go,” says Bloom, “you’d be pretty hurt on the years that are down.”

Whether Pebble Mine will bring more down years for salmon and fishermen is hugely contentious. This past April, Brennan’s coauthor, University of Washington fisheries scientist Daniel Schindler, testified to a US Army Corps of Engineers hearing that the corps’ draft assessment for the Pebble Mine, which considers only a fraction of Northern Dynasty Minerals Ltd.’s longer-term ambitions, “should be thrown out” because it “distinctly underestimates risks to fish, to water, and to people.” “It is junk,” he says.

When reached for comment, US Army Corps of Engineers spokesperson John Budnik says that, “At this time, we do not have anything to contribute regarding the embargoed paper.” The corps is accepting public comments on the draft assessment until July 1.

The mine’s owner, however, has lauded the draft environmental impact statement repeatedly.

In response to this study, Pebble Partnership spokesperson Mike Heatwole pointed to the company’s modeling and years of environmental baseline studies, which he says show the streams near the proposed mine site represent “low quality habitat” not often used by fish. “Our project will displace an insignificant amount of habitat in an immense system and in an area for which we know that habitat is not a limiting factor for salmon,” he says.

Bloom says Brennan’s finding, that important salmon habitats shift over time, validates her distrust of the corps’ conclusions, which she criticizes for taking an “incredibly narrow view” of a mining plan that seems tailored to get a foot in the door now for major expansions later. “How can I believe in the scientific integrity of this EIS that says there’s not going to be any [risks]?” she says.