From Holland’s famous dikes to the construction of New Orleans on a former swamp, humans have a long history of “reclaiming” flooded coastal lands for their own purposes. But in recent years, as the value of wetlands has been better understood, the trend has been moving in the opposite direction, with increasing protection for coastal zones and efforts to restore wetlands to their natural state. But this is not so in China, where rapid growth of both the economy and the population, especially along the coasts, has led to coastal reclamation projects on a massive scale.

Earlier this year, a team of researchers published the results of a satellite survey that tracked changes in China’s coastline between 1985 and 2010. They found that in this period, nearly 7,700 square kilometers of coastal wetlands—about the size of Delaware and Rhode Island combined—were lost to land reclamation projects.

“They’re completely industrializing the coastal ecosystem,” says Chip Fletcher, a coastal geologist at the University of Hawai‘i who was not involved in the research. “The problems China is experiencing are typical of other places in the world, but it’s taking it to a whole new level.” 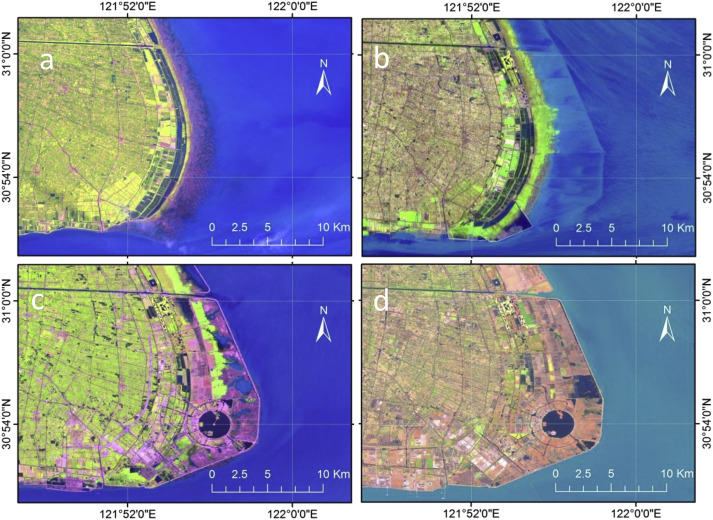 Bo Tian, a geographer at East China Normal University and lead author on the study, says the paper grew out of his team’s examination of changes in China’s coastal wetlands, and the recognition that land reclamation was a key driver.

China’s economy has grown rapidly since 1985, with much of its urbanization and industrialization concentrated in coastal regions. Over the past decade, local governments have been especially active in promoting economic growth through the expansion of coastal industries, leading to increased demand for land, writes Bo and his colleagues in their report. The pace of coastal reclamation began to accelerate even further around 2005 as the economy’s boom swiftened. China’s strict laws protecting arable farmland from development only add to the pressures to reclaim coastal wetlands for industrialization.

The magnitude of those impacts make it surprising that the Chinese government would support reclamation projects on such a large scale, Fletcher says. “The Chinese appear to be bent on creating new coastal land because of the growth of their coastal population, and are not too worried about the loss of ecosystem services in the process,” he says.

While the development isn’t expected to have a direct environmental effect outside of China, the massive reclamation work could be of global significance within the coming century, Fletcher adds. While low-lying reclaimed lands might initially absorb some of China’s population growth, rising sea levels could mean that they ultimately contribute to a worldwide flood of climate refugees.

“These are lands,” Fletcher says, “that are going to have to be abandoned.”