Rock-walled clam gardens are an aquaculture technology used by Indigenous peoples along the North American west coast to enhance the production of clams and other marine species. Photo by Keith Holmes

To the untrained eye, the rows of rocks piled near the tideline on British Columbia’s Quadra Island could easily be dismissed as the constructions of bored beachgoers. But new research using radiocarbon dating and analyses of ancient landscapes reveals that these rock walls are the remnants of a technology at least 3,500 years old—evidence of an aquaculture system known as clam gardens that once helped feed a much larger population of coastal Indigenous peoples.

The clam gardens on Quadra Island are located within the territories of the Laich-Kwil-Tach First Nations and northern Coast Salish. They were identified to Western science by coastal geomorphologist John Harper in the mid-1990s.

“Everybody thought he was crazy,” says Christine Roberts, in charge of archaeology for the Wei Wai Kum First Nation in Campbell River, British Columbia. People assumed the rocks were artifacts of retreating glaciers, she says, but elders in the community confirmed they were deliberate constructions. Families who built the clam gardens likely controlled harvesting from those sites.

Of the clam garden walls studied on Quadra Island, new research reveals that one was built roughly 3,500 years ago. This would make it the oldest clam garden on record, pushing back the known history of these structures by as much as 2,000 years.

Clam gardens are a form of food production and food security that the First Nations peoples have used for generations, says Nicole Smith, an independent archaeologist working with the Hakai Institute* studying the Quadra Island sites. “They’re a culmination of ecosystems and environmental knowledge,” she says.

Clam gardens are ingenious structures that hint at Indigenous peoples’ intimate knowledge of their environment, and their ability to sustainably manage it for their own benefit. The rock walls typically stand 40 centimeters to 1.5 meters high, and are positioned near the lowtide line, Smith says.

As the tide shifts back and forth, sediment becomes trapped behind the rocks, creating habitat for shellfish such as butter clams and littleneck clams. Some gardens improve existing clam habitat, while others create new habitat where none existed by trapping sediment on bedrock, or by leveling steep shorelines to create terraces. The technology changes the slope of the beach at the elevation where the clams like to be, Smith explains.

By enhancing sediment deposition, clam gardens change the shape of the intertidal zone, increasing the amount of viable habitat for clams and other species. Animation by Judy Somers

Clam gardens are found from Southeast Alaska to Washington State and serve more than clams. The gardens become home to all manner of marine life forms, including crabs, whelks, and chitons, adding to biodiversity on the beaches. “They’re more sea gardens than clams,” Smith says.

To unlock the secrets of these ancient structures, researchers excavated six walls in Kanish Bay and three in Waiatt Bay, on Quadra Island off northeastern Vancouver Island. The scientists collected radiocarbon** samples from the scars where barnacles attached themselves to the rocks, as well as from clamshells that were wedged into and beneath the walls—all neatly preserved by the sediment.

At the time they were built, the clam garden rock walls on Quadra Island would have been placed at the lowtide line. Today, those same rock walls are located as much as a meter upslope, but still flood at high tide.

For years, researchers assembled on the beaches during the lowest tides, working feverishly before the ocean returned and flooded their worksites. “We’d race like crazy, then after the tide came in, we were spread-eagle on the ground to catch our breath,” says archaeologist Dana Lepofsky of Simon Fraser University in Burnaby, British Columbia. “It was totally wild, covered in mud from head to toe.”

Smith adds: “Shorelines have shifted a lot since the last glaciation. On Quadra Island we see clam garden walls everywhere because the shoreline position is lower now. They stand proud and prominently.” 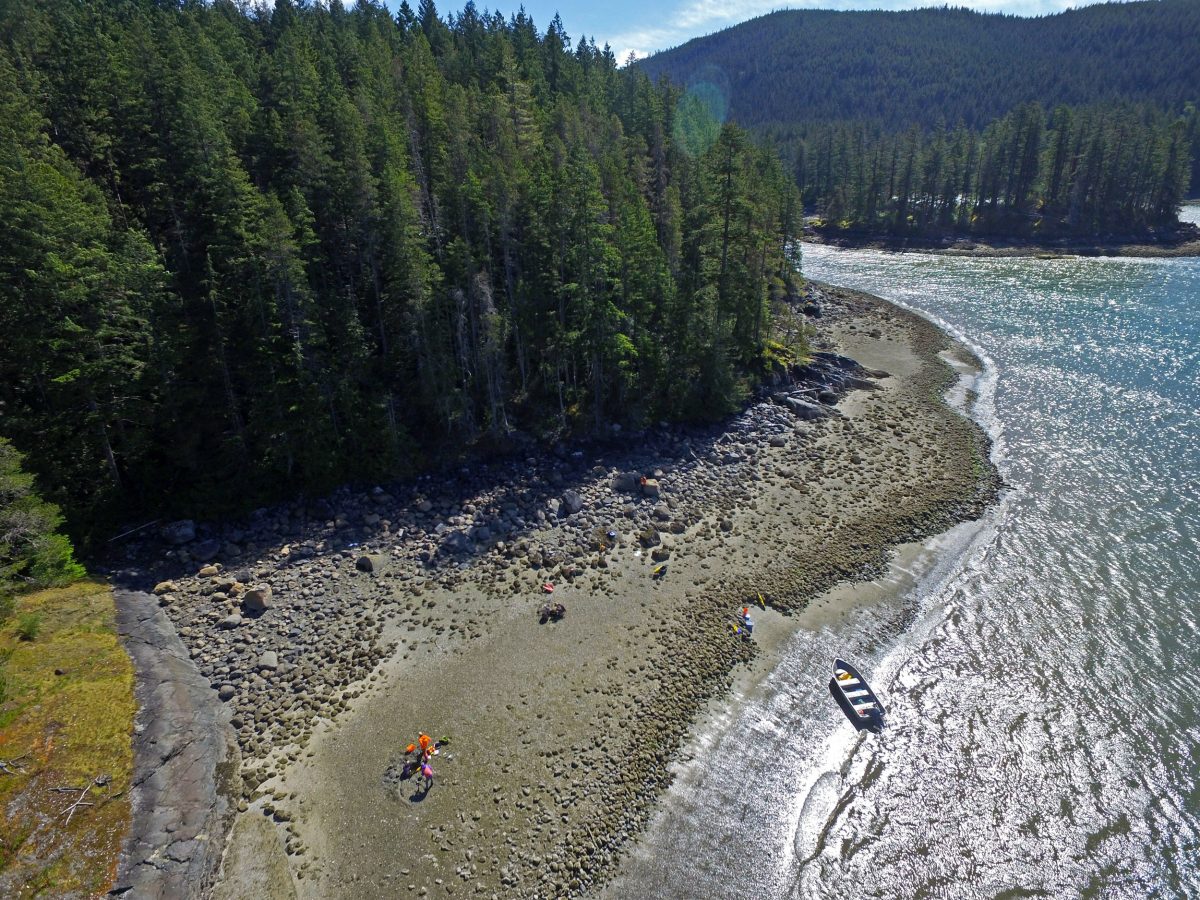 On Quadra Island, British Columbia, changes in the relative sea level over thousands of years mean that the clam garden rock walls, once set near the lowtide line, now sit above the water most of the time. Photo by Keith Holmes

The clam garden study is one piece of a larger collaborative project to trace the human history on Quadra Island.

Other researchers have obtained sediment cores from bogs and ponds at different elevations across the island. Identification of freshwater versus saltwater diatoms and radiocarbon dating of seeds, wood, shell, and charcoal preserved in the sediments allows researchers to trace how the shoreline has changed over time. Aircraft surveys using lidar also provide detailed elevation models, helping to pinpoint sites such as protected bays or spits where humans likely lived, resulting in more shoreline excavations yielding items such as stone tools.

It’s all providing First Nations with a unique and detailed glimpse into their past. Roberts notes that details of the clam gardens are being built into the school curriculum, so no one forgets again. “It’s pretty skookum to have this knowledge of our territory,” she concludes.

**The story originally said the scientists collected DNA samples from the scars.