When exposed to a variation of the classic psychological marshmallow test, cuttlefish showed they were capable of self-control. Photo by Biosphoto/Alamy Stock Photo

Good things come to those who wait—especially for the cuttlefish hanging out with Alexandra Schnell, a comparative psychologist at the University of Cambridge in England. For the past decade, Schnell has been digging into cephalopod behavior and cognition by giving them tests traditionally used to measure brain power in primates and other vertebrates. And the squishy creatures are performing remarkably well.

In fact, a new study suggests that cuttlefish can display self-control. When given the choice, some individuals opt to forgo instant gratification if it means they can get a better reward down the line. In humans and other species, this ability, known as delay maintenance, is thought to have been an important step on the evolutionary road to complex decision-making.

Six subadult cuttlefish took the test, a riff on the well-known marshmallow test first performed by Stanford researchers some 50 years ago. Each animal was presented with two chambers—one containing an immediately available morsel of raw king prawn, a so-so snack in the eyes of a cuttlefish. The other was baited with live grass shrimp, a more desirable option, but one that was available only after a delay. If the cuttlefish waited for its preferred prey, the wait time was increased for the next round of the experiment.

“The most surprising thing was that they were able to tolerate delays of 50 to 130 seconds,” says Schnell. “That’s comparable to what we see in large-brained animals such as chimps, crows, and parrots.”

The cuttlefish that waited the longest for their favorite foods also performed better during learning tests, a link which has only been shown in humans and chimpanzees. In the future, Schnell and her team plan to broaden the battery of tests to explore that connection further.

Like humans, however, not every cuttlefish was a star pupil. “You do get the impatient ones,” says Schnell. “There was one cuttlefish that would squirt me with her siphon repeatedly until I would come over to feed her. They have so much character.” 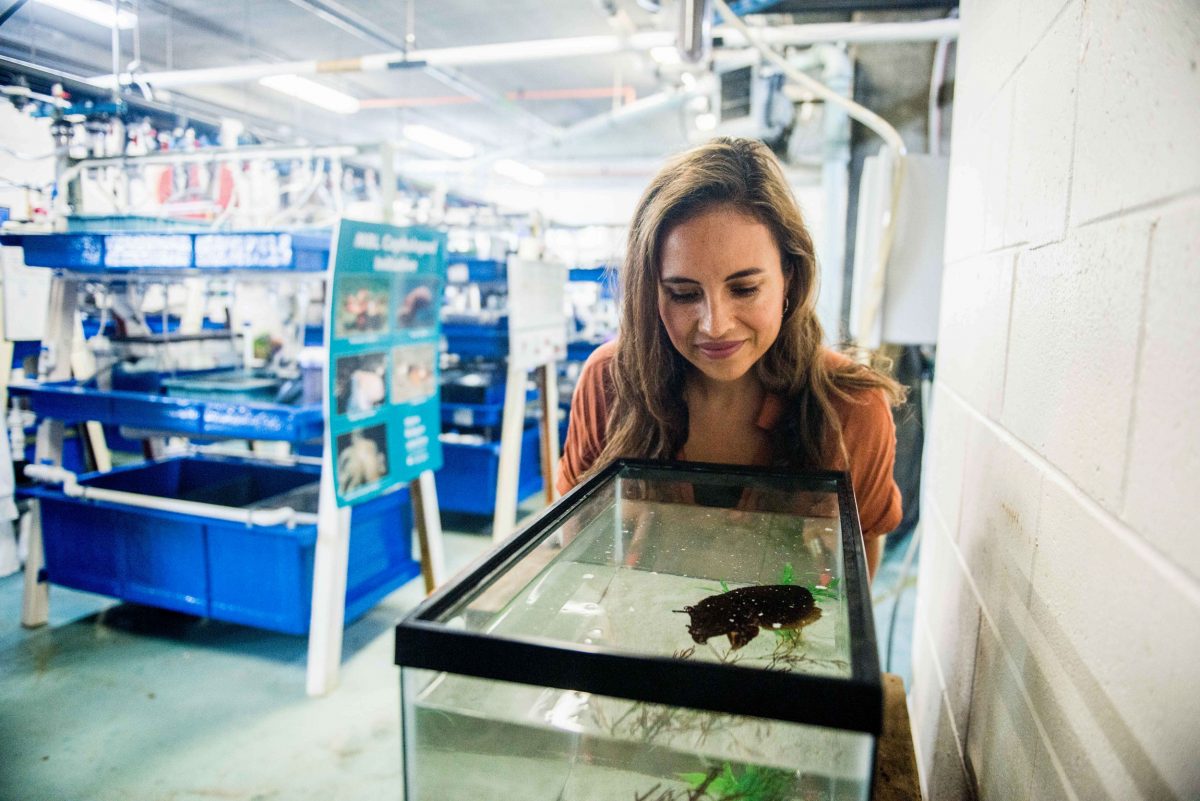 Alexandra Schnell, a comparative psychologist at the University of Cambridge in England, plans to further study the bounds of cuttlefish’s cognitive prowess. Photo courtesy of the Grass Foundation

To ensure the animals were actually weighing the options and using that information to inform their decision, the researchers introduced a different pairing. In this setup, one chamber contained king prawn, and the other an unobtainable shrimp.

“If their self-control is flexible and I hadn’t just trained them to wait in any context, you would expect the cuttlefish to take the immediate reward [in this case], even if it’s their second preference,” says Schnell. That’s exactly what happened. What’s more, this shows that king prawn hadn’t been taken off the menu.

“That’s something you have to test when you’re looking at self-control with different quality foods,” notes Schnell.

“If I give a child an apple and say, ‘If you wait 15 minutes, you can have this chocolate bar,’ most of them would probably say, ‘No problem. I want the chocolate,’” says Schnell. The team needed to be sure that cuttlefish would take their version of an apple if it was the only option.

There’s another sign that may also indicate the cuttlefish were deliberately waiting. During some trials, cuttlefish appeared to move their bodies away from the immediate reward. “We see this in some other animals as a coping mechanism to try and resist temptation and wait for the better reward,” says Schnell. Parrots close their eyes; corvids and dogs turn away; chimpanzees try to distract themselves. Schnell doesn’t know yet if the cuttlefish are doing something similar, but the possibility is intriguing.

Jennifer Vonk, a comparative and cognitive psychologist at Oakland University in Michigan who was not involved in the study, is excited to see cuttlefish exposed to these kinds of tests. Testing a wider variety of species, she explains, can help us unravel the mystery of what drives cognitive prowess.

The lineage that led to cuttlefish and their kin split from the vertebrate lineage more than 550 million years ago. Their most recent common ancestor, a wormlike creature with a very simple nervous system, wouldn’t have had these abilities. This means that any cognitive traits shared by humans and cuttlefish evolved independently.

“Our brains are so structurally different,” says Schnell. “The mammal brain is divided into two hemispheres and made up of about five lobes. The cephalopod brain is donut-shaped. It’s between 30 and 40 lobes, if you’re talking about a cuttlefish or octopus, and it doesn’t have these hemispheres.”

Donut-shaped brains aren’t the only things separating cuttlefish and large-brained vertebrates. One leading hypothesis for the driving force behind advanced cognition is that it helped animals navigate the challenges of a complex social life. But cuttlefish are not cooperatively social animals. They don’t practice parental care, and with a mere two-year life span, their generations don’t overlap. This means cuttlefish do not form strong affiliations with kin or partners. Some species even struggle to recognize members of the opposite sex. During mating, males will stick sperm packets on any individual they encounter.

“We don’t know if living in a social group is important for complex cognition unless we also show those abilities are lacking in less social species,” says Vonk. “There’s still so much room to understand more.”