Workers on an illegal fishing boat hunt for tuna in the South Atlantic. Photo by Jeremy Sutton-Hibbert/Alamy Stock Photo

One out of every four fish sold in the United States is illegally caught, but a new and surprisingly simple international accord could help turn the tide in an unprecedented way.

On June 5, the world’s first legally binding treaty on illegal fishing, the Agreement on Port State Measures to Prevent, Deter and Eliminate Illegal, Unreported and Unregulated Fishing, came into force. The bill was spearheaded by the United Nations Food and Agriculture Organization (FAO), which approved the treaty in 2009. A one-month countdown was triggered May 6, when 29 countries signed the accord—surpassing the minimum number of 25.

Each year, illegal or unreported catches account for as much as 11 to 26 million tonnes of fish, with an estimated value of US $10- to $23.5-billion.

“Illegal fishing is an enormous problem, bigger than most people would ever imagine,” says Per Erik Bergh, a coordinator with Stop Illegal Fishing, an advocacy organization based in Gaborone, Botswana.

Illegal fishing boats are frequently flagged by international agencies such as Interpol, whose Project Scale task force identifies criminal boats and reports them to local authorities, but capturing, charging, and prosecuting crews and shipowners is difficult. Patrolling huge expanses of ocean is a logistical nightmare, and the ease with which boats are able to change names and flags makes tracking them difficult.

But with 35 participating countries, plus the European Union, the UN’s new agreement will be effective in deterring illegal fishing, says Bergh—if it’s actually enforced. 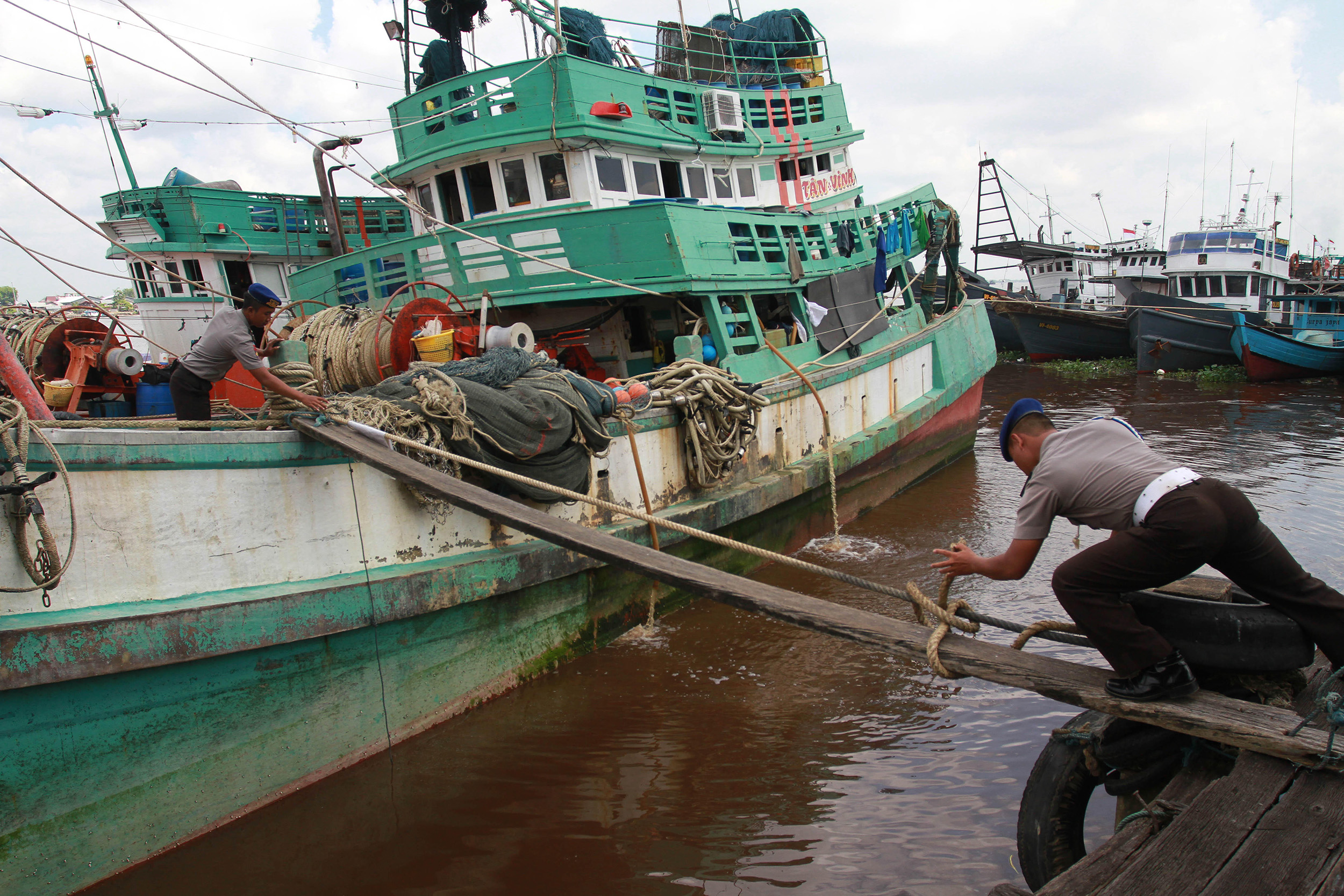 Police in Indonesia tie up a fishing boat confiscated from a Vietnamese crew that had been fishing illegally. Photo by Pacific Press/Alamy Stock Photo

At its core, the agreement is quite simple: participating countries are asked to prevent illegal fishing vessels from docking in their ports, says Lori Curtis, a fisheries officer with the FAO. If they can’t dock, illegal fishers will have difficulty offloading and selling their ill-gotten hauls, she says.

When a foreign ship approaches a participating country, it will be directed to dock at a port with the capacity to inspect cargo. The ship will also have to disclose detailed information about its identity, activities, and the fish that are on board. At many international ports, which earn large amounts of money from docking vessels, the current status quo of inspection and record-checking is often piecemeal, a loophole frequently exploited by vessels with illegal cargo.

Port authorities will be required to report and share information about illegal vessels with neighboring countries—“preferably coordinated by FAO,” according to the agreement—in addition to the country where the vessel is registered. This will target the use of “flags of convenience,” vessels registered in countries known to have lower taxes or less restrictive law enforcement.

“If one has a lot of red flags and [the port state doesn’t] have the capacity to inspect it, they can choose to deny it entry because they know it’s a high-risk vessel,” says Curtis.

So far, the agreement has the support of most Caribbean nations, a handful of Nordic, African, and Southeast Asian countries, plus the United States, Uruguay, and the EU. Notable exceptions to the list of signatories are Japan and China. But the treaty covers enough of the world that it should make life for illegal fishing vessels significantly more difficult, says Bergh.

Fish economist Rashid Sumaila agrees: “Even if it’s easy to fish in Namibian waters or Mozambican waters—and it’s hard to stop illegal fishing—whoever is catching the fish will have to try to sell it in a market.”

“If you cannot sell your illegally caught fish, if you cannot get them into the market, then that big incentive is automatically taken away,” he says.

Sumaila is optimistic the agreement will make a difference, but he does have two primary concerns: one, that developing states won’t have the expertise or technical equipment needed to enforce the agreement; and two, that countries will drag their heels on implementing the agreement.

On that first point, Curtis says there’s a provision that requires developed countries to help developing nations with technology, infrastructure, and training. On the second, she says the FAO expects the group of signatories to meet “as soon as possible.”

Since the treaty came into force, five additional countries have joined, says Curtis, and they’re currently fielding interest from non-signatory countries that are getting a sense for how they can put measures in place before they join. That is a hopeful sign governments are genuinely interested in enforcing the agreement, says Curtis, rather than just signing an empty treaty.

Sumaila certainly hopes so. “For it to be effective, citizens, civil society, journalists, scientists, we need to keep pushing our governments to do something,” he says. “People have to take this initiative and bring it to life, make it happen.”

This story was updated to correct the spelling of Per Erik Bergh’s surname.