Mother ducks pluck down from their chests to use as insulation for their nesting chicks. Photo by Bob Hansen

The water is ice-free, the skies blue. As Lucassie Arragutainaq slides his aluminum motorboat onto the shore of an island in Canada’s Hudson Bay, he scans the rocky surface. No polar bears or Arctic foxes seem to be on the hunt, so he and his family members (10 in all) clamber out of the boat. They’re here to collect down from eider duck nests, so they search the ground for the tufts of gray feathers eider mothers pluck from their breasts in order to incubate their eggs and keep their ducklings warm.

When Arragutainaq finds a nest, he takes about half of the soft, light feathers—the amount one can remove and still ensure the eggs or ducklings survive. He puts the down in a plastic bag and brings it back to the meeting point, where his family gets to work cleaning the feathers.

Every summer for the past three decades, Arragutainaq, from the Inuit community of Sanikiluaq, has collected eiderdown—the warmest natural insulation in the world—from duck colonies on Nunavut’s Belcher Islands. When conditions are just right, as they were a number of times this past summer, the whole family joins in for the traditional harvest. 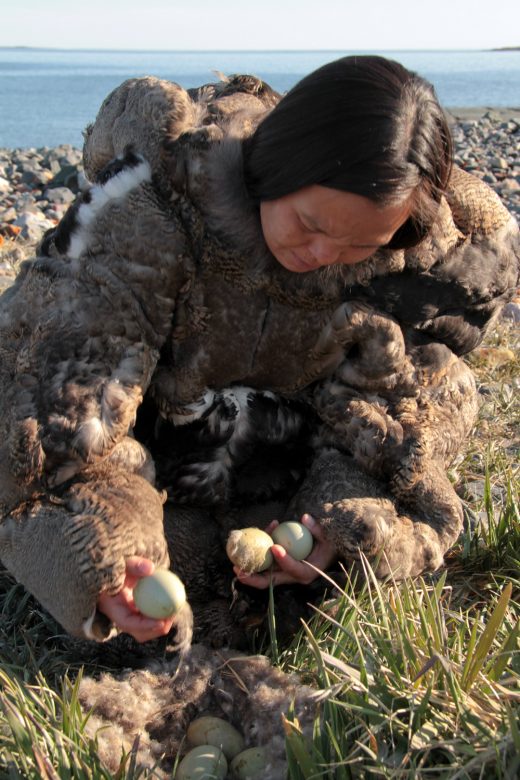 In northern Canada, Inuit collectors gather eiderdown for clothing. As explored in the documentary People of a Feather, they also hunt the ducks and collect eggs. Photo by Joel Heath/Arctic Eider Society

This year, Arragutainaq and his family collected six garbage bags full of down, which they will use to fill parkas and wind pants. At the moment, the family is mostly using the down themselves, but Arragutainaq hopes to start selling eiderdown-stuffed clothing in the future.

On the open market, eiderdown is a staggeringly expensive luxury product used to stuff comforters, pillows, and jackets. Just one eiderdown duvet can cost upward of US $16,000. Commercial operations to harvest eiderdown exist in Canada, Iceland, and Norway. Of the approximately 2,300 kilograms harvested annually, 70 percent comes from Iceland, where eider habitat is protected.

Arragutainaq says the fact his family is able to carry on the tradition is more important to him than the business potential. Either way, in recent years, Arragutainaq has been facing stiff new competition: polar bears.

Climate change is altering the Arctic ecosystem. Data collected by the Canadian government shows that the Hudson Strait is now ice-free for a full two months longer than it was 25 years ago, a change that’s rippling through the ecosystem. Scientists, including local Inuit researchers, are carrying out field and drone surveys and conducting genetic testing of polar bears to investigate the consequences.

Polar bears are among the most well-known victims of climate change. These solitary hunters depend on seals they catch from sea ice, but as the ice melts, they’re forced to prowl on shore. On land, though, the bears have discovered the smorgasbord that is an eider colony (the largest ever recorded had roughly 5,000 nests). The bears ravage the colonies, destroying up to 90 percent of the eggs.

When University of Windsor conservation biologist Cody Dey arrived at an island in East Bay, Nunavut, last summer to survey eider nests, he quickly realized that a polar bear had visited the colony before him. Nearly every nest was littered with the broken green-hued shells of eider eggs.

The bears “push their faces into the nest, essentially pop the eggs, and then just slurp up the contents,” says Dey.

In other places, such as Alaska, eiders have been able to adapt to an influx of predators by dispersing and forming smaller colonies. A study conducted in the Aleutian Islands, for example, showed that eiders spread to nearby islands and colony sizes decreased when Arctic foxes hunted the ducks. When people eliminated the foxes to restore bird populations, the original eider colonies rebounded. 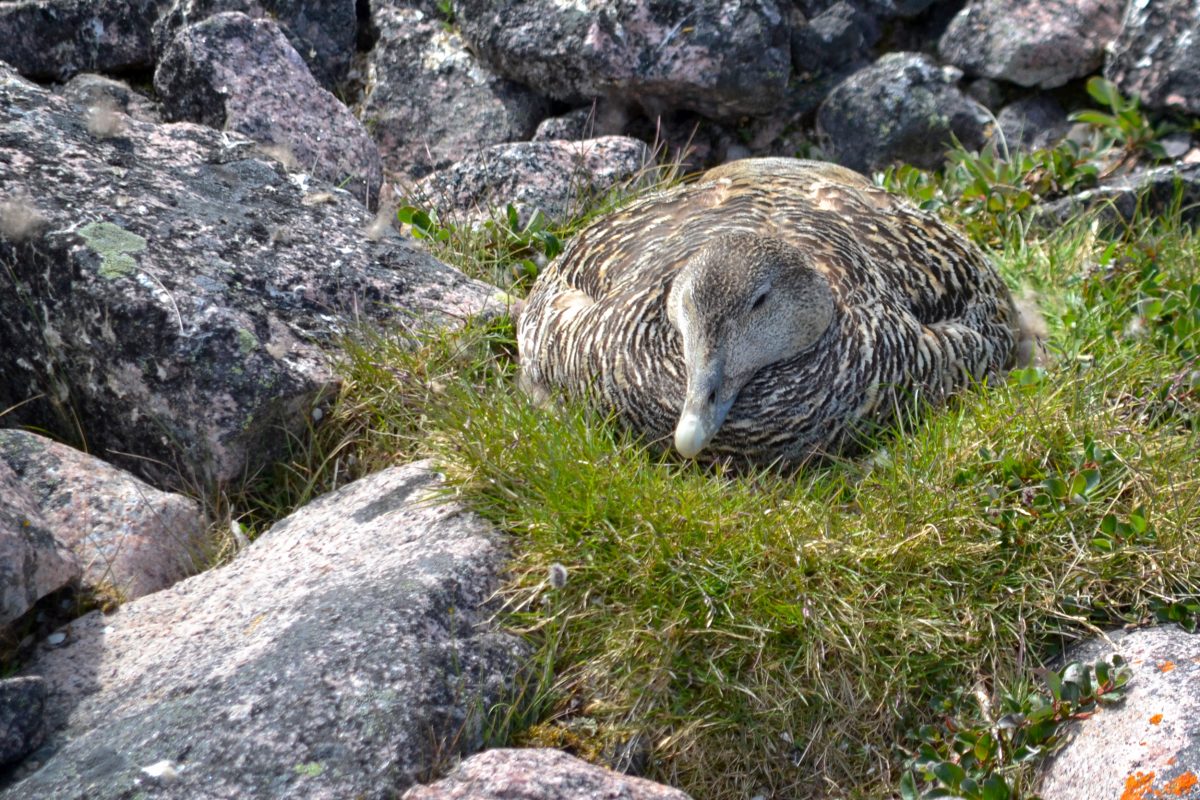 Eiderdown is a luxury product harvested from wild eider ducks in northern Canada and elsewhere. Photo by Bob Hansen

Local observations and scientific surveys show that the birds are already starting to spread out around the Belcher Islands and East Bay in response to the polar bears’ presence.

“It’s often called an arms race between the prey and predator,” says Grant Gilchrist, a research scientist with expertise in Arctic marine ecology.* Gilchrist has worked in the region for decades and says, “right now, because this amount of devastation is a fairly new phenomenon, the birds are still nesting in pretty big colonies, and the bears are destroying them.”

The warming is giving the eiders some advantages, though. The increasingly lengthy ice-free period is giving them more time to fatten up for their breeding season—improving their rate of reproduction. But the onslaughts from bears is likely balancing out the advantage, Dey says.

Unfortunately for the bears, the calories they get from eider eggs also aren’t enough to replace what they would have gotten from eating seals. Climate change is expected to create both winners and losers, but as Dey’s research has shown, so far there are no clear winners here.

In the end, Dey says he’s not sure what’s going to happen to the eiderdown industry. At the end of this year, he plans to visit Inuit eiderdown collectors to talk with them about what they are experiencing. He plans to take a closer look at the economics of the practice.

“It might be the case that these ecological changes would increase the price of Canadian down,” he says, which would make it less competitive on the world stage.

In the meantime, Arragutainaq will keep taking his family on outings to collect down. This year, he brought his young granddaughter Hazel, who loved picking leaves and seaweed from the feathers. All the while, he’ll keep a watchful eye out for hungry polar bears.

*This sentence was changed to better reflect Gilchrist’s expertise.