In 2012, an important Florida oyster fishery was driven to collapse. Now, in the US Supreme Court case Florida v. Georgia, the two states are arguing over who is responsible. Photo by Kelly vanDellen/Alamy Stock Photo

When Robert Livingston studied Florida’s Apalachicola Bay and River in the 1970s, he marveled at the ecosystem’s health. The bay produced a rich bounty of oysters, shrimp, fish, and crabs. Those animals, in turn, supported a thriving fishing community and seafood industry.

But since then, the bay has declined. During a 2012 drought, the oyster fishery collapsed—and has not recovered.

In the past, the ecosystem “was like a symphony orchestra,” says Livingston, an aquatic ecologist at Florida State University in Tallahassee. “Now it is not. It is dysfunctional.”

The Apalachicola Bay fishery dates back to the 1800s and once provided 12 percent of the country’s eastern oysters. Its devastation has raised a host of questions about the source of its decline. Was the collapse caused by overharvesting, a lack of fresh water, low nutrients, poor habitat management, or all of the above? It’s a debate that has raged everywhere from the fishing docks to the US Supreme Court.

In court proceedings, which began in 2013, Florida argues that neighboring Georgia is drawing too much water from the Apalachicola-Chattahoochee-Flint (ACF) River Basin, depriving the bay of crucial fresh water. Florida is requesting that its residents receive an “equitable share” of the basin’s waters.

Georgia, in turn, is countering that Florida brought its fishery troubles upon itself by allowing unsustainable oyster harvesting. Given that Georgia must support most of the river basin’s population and a US $4-billion agricultural industry, its water usage is “exceedingly reasonable,” according to the state’s pretrial brief.

But six years after the Apalachicola Bay oyster fishery was wiped out, researchers still have yet to come to a consensus on the main culprit of the collapse. And as Florida takes on Georgia in the latest salvo of an interstate water fight that has spanned three decades, the public is looking to scientists for answers.

In the summer of 2012, it became clear that the oyster shortfall was dire. According to a report from the Florida Department of Agriculture and Consumer Services, oyster density at one major reef plunged from 430 oysters per square meter to 64 in one year. “I have never seen a fishery failure as severe,” said Mark Berrigan, a scientist who had worked for the State of Florida for three decades, in his court testimony.

As the situation deteriorated, fishers, scientists, and state agencies began to seek explanations. Some community members worried that oil or dispersants from the 2010 Deepwater Horizon oil spill had polluted the reefs. Scientists discussed whether the ongoing drought, and the consequent lack of fresh water and the nutrients it carries, was behind the die-off. Freshwater flow typically rises in winter and dwindles in late summer and fall, and the bay’s animals are accustomed to dealing with those seasonal fluctuations. But the low water levels caused by the drought had made the bay saltier than usual, and fishers were seeing unusual numbers of oyster predators, such as southern oyster drills (which thrive in the elevated salinity) in the bay. Researchers also wondered if the collapse was the result of overharvesting.

It was a complex situation, scientifically and politically. And as with most questions about entire ecosystems, simple answers proved elusive. Yet as the legal dispute gained speed, figuring out who or what was to blame became a key component of both states’ positions.

David Kimbro, an ecologist now at Northeastern University in Nahant, Massachusetts, was one of the scientists pulled into the dispute. 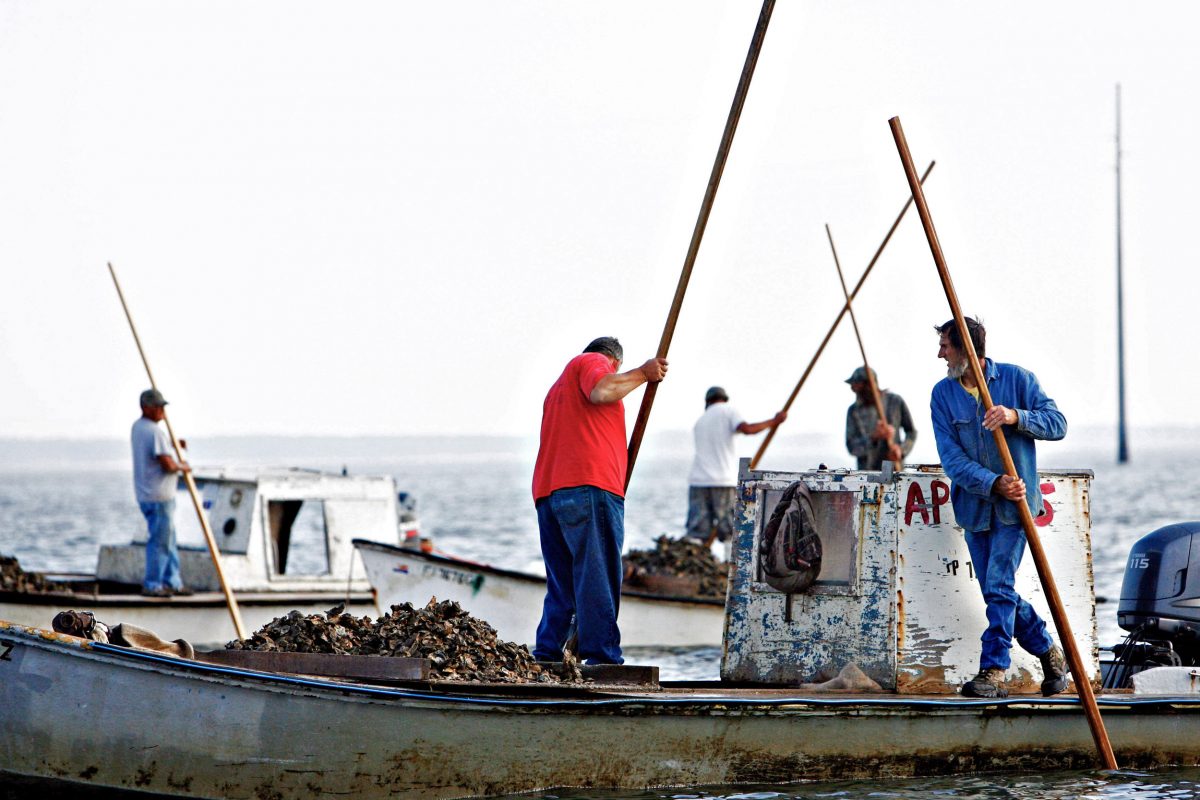 Scientists have yet to agree on a consistent explanation for what caused the oyster fishery to collapse. Photo by ZUMA Press Inc/Alamy Stock Photo

When Kimbro began his study, “I felt that people really had no hard answers,” he says.

At the behest of the State of Florida, Kimbro and his team continued experiments in the bay that they had started after the initial collapse of the oyster population. From 2013 to 2017, the researchers studied the predator dynamics of the southern oyster drill. Kimbro’s research confirmed that as the water salinity increased, so too did oyster predation by the drills.

Kimbro compared Apalachicola Bay with nearby Ochlockonee Bay. That bay is fed by the Ochlockonee River, and as such was unaffected by Georgia’s water withdrawals. Ochlockonee’s oyster population had fared better, particularly near the river mouth. Kimbro and his colleagues concluded that if Georgia had taken no water from the ACF River Basin in the five years before the crash, the amount of oysters on the bay’s commercial harvest reefs would have been six to ten percent higher in 2012, thanks to lower predation by the drills and other salinity-related factors. In that scenario, the fishery would not have collapsed, Kimbro said in his testimony. “This is what pushed the population over the edge,” he says.

But Georgia wanted its own study.

Rom Lipcius, a marine ecologist at the Virginia Institute of Marine Science and the College of William and Mary in Gloucester Point, Virginia, conducted another analysis of the oyster collapse at Georgia’s request. He based his research on existing data such as government oyster surveys and fishery landings. From that analysis, Lipcius concluded that the abundance of oysters in Apalachicola Bay only dropped significantly in heavily fished areas—a finding that points the finger at Florida’s oyster fishers. Lipcius also found that over the past three decades, low river flows were not associated with reduced oyster landings.

What’s more, Lipcius says that from 2009 to 2012, the number of fishing trips by oyster harvesters in the area was unusually high. Fishers caught fewer oysters per trip—a symptom of a collapsing fishery, Lipcius says. Florida had relaxed fishing regulations in 2010, and Lipcius reported that the state’s oyster habitat restoration activity was below average starting the year before the crash.

In the case of Florida v. Georgia¸ each side claims the other’s scientists’ work is flawed. Numerous criticisms, rebuttals, and additional analyses are detailed in Kimbro’s and Lipcius’s testimonies.

Given that Kimbro’s and Lipcius’s studies were funded by Florida and Georgia, respectively, perhaps it’s not surprising that they reached different conclusions. But both scientists say that they were not working toward a predetermined result.

Kimbro says that when he was contacted by Florida legal representatives about conducting experiments, he told them, “You may not like what I’m going to find. And I’m not going to change my conclusions just to appease my sugar daddy.”

Similarly, Lipcius says he did not set out to prove that overharvesting was the cause.

Michael Beck, lead marine scientist at the Nature Conservancy in Santa Cruz, California, says that Kimbro and Lipcius are both good scientists. “There’s more than one way to honestly look at the data,” he says. Still, from his review of the evidence, he says “it does look like overharvesting is probably the bigger issue.”

Florida State’s Livingston, for his part, believes the studies weren’t comprehensive enough to provide answers. “I don’t think that Supreme Court case is based on adequate science,” he says.

For the Supreme Court case, the court appointed a lawyer in Maine as special master, a role that involves directing court proceedings and examining the divergent arguments at hand. In a February 2017 report, the special master decided to split the difference. Though he appeared to believe Kimbro’s assessment that Georgia’s water use precipitated the oyster fishery crash, the special master determined, in the end, that the court should not fulfill Florida’s request. Even if Georgia used less water, he concluded, it was unclear whether that water would reach Florida during dry times, when it was needed to support the oyster population. The Supreme Court, which heard arguments last month, now needs to decide whether to accept the special master’s recommendation.

If scientists agree on anything, it is that multiple factors contributed to the collapse. But figuring out how to weight each element’s importance is another matter—and one not likely to be resolved anytime soon. The court, meanwhile, is expected to release a decision by June.