Zoanthids, sometimes called soft corals, are expected to thrive in the acidic ocean of the future. Photo by age fotostock/Alamy Stock Photo

In the prestigious scientific journal Nature, preeminent coral reef scientists recently told the world that it’s time for a change in expectations: “We have to accept that coral reefs around the world are transforming rapidly into a newly emerging ecosystem unlike anything humans have experienced before.”

Coral reefs as we know them are dying. These fragile yet vital ecosystems are under assault from a vast array of forces, from local problems such as pollution and invasive species, to global warming, ocean acidification, and other widespread aggressors. But when corals die, they will not leave a void: other species will take their place. But what might this newly emerging ecosystem look like?

“I’m interested in trying to understand how increasing acidity is affecting coral reefs now, and what that means for the future for different organisms,” Johnson says. So far, she is finding that fleshy coral relatives called zoanthids excel in the harsh acidic conditions to come, suggesting that reefs of the near future may become dominated by these colorful, toxic animals.

Zoanthids come in an assortment of brilliant rainbow hues, and are incredibly popular in the aquarium trade. Though they are sometimes referred to as soft corals, they are only tangentially related to the reef-building species.

Zoanthids and corals fit in the same taxonomic phylum, Cnidaria, but zoanthids have their own distinct order, Zoantharia. Like their reef-building cousins, zoanthids have a mutualistic relationship with microscopic algae, which the animals use to derive energy from sunlight through photosynthesis. Unlike true corals, zoanthids don’t produce a hard skeleton—they don’t build reefs.

In today’s ocean, these evolutionary cousins compete fiercely for reef real estate. In the future, this battle may be decidedly one-sided.

“The zoanthid has the potential to overgrow important corals and even kill them,” Johnson says.

Ocean acidification is occurring because the amount of carbon dioxide in the atmosphere is rising, and as it does, more of this gas dissolves in the ocean. It’s a change that should theoretically benefit both reef-building corals and zoanthids—to a point. Carbon dioxide is a main ingredient in photosynthesis, so increasingly acidic water will boost the activity of their algal symbionts.

And yet, for corals, scientists have generally found the opposite (though it can depend on the study). Corals struggle with ocean acidification because it makes it more difficult for them to build their hard calcium carbonate skeletons. Zoanthids, free from the burden of creating these rigid structures, should receive all the upsides of acidification without the costs, helping them win the turf war against their hard-bodied relatives.

To test whether this is actually happening, Johnson and her colleagues collected specimens from a Panamanian reef, and pitted them against each other in the lab.

In more than 100 tightly controlled tanks, Johnson watched how one species of reef-building coral (the branched finger coral) and one species of zoanthid (the mat zoanthid) coped with ocean acidification. In some tanks, she tested how the two species dealt with acidified conditions on their own. In other tanks, the two species were thrown into the same ring. 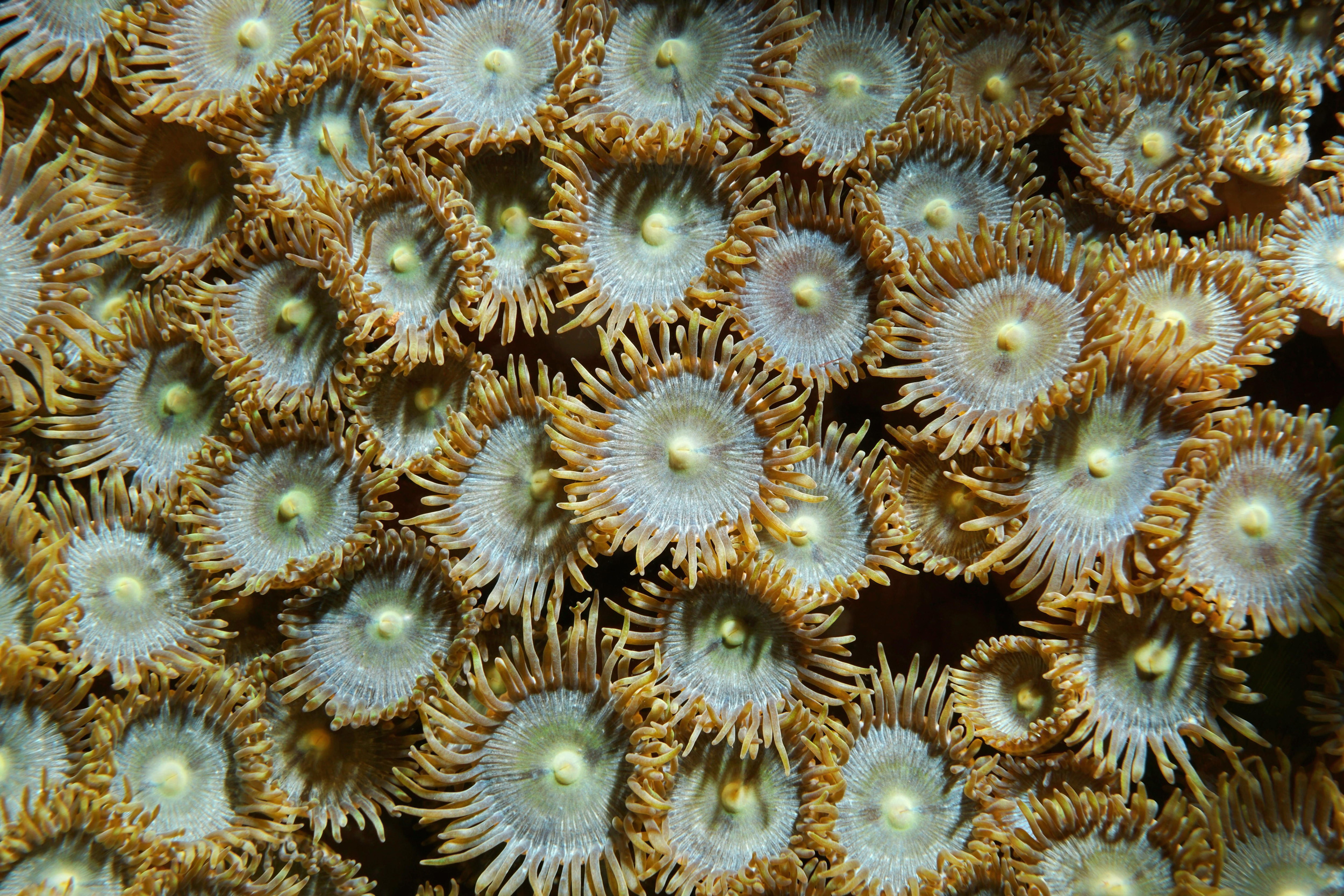 In laboratory trials, the mat zoanthid was able to out compete a reef-building coral. Photo by Seaphotoart/Alamy Stock Photo

As expected, the zoanthids grew better in an acidified tank. Perhaps surprisingly, Johnson’s corals fared fairly well, too, but only when they were on their own in the tanks. When they were grown alongside zoanthids, the corals suffered.

The corals were “constantly fighting this zoanthid that is trying to grow over its surface and take over that space,” Johnson explains. In most cases, the corals lost.

Based on her results, Johnson believes that shallow coastal habitats where coral reefs grow today may, in the future, be dominated by fleshy organisms such as zoanthids.

“That has some pretty serious repercussions,” she says, “because our reefs are built by corals. So if we’re losing some of our coral species … then we’re losing the basic building blocks for the coral reef.”

These future ecosystems “could be pretty,” she admits, with some hesitation. Fields of brightly colored zoanthids might be visually stunning, but they would function entirely differently from coral reefs.

Many ocean species rely on the complex physical structure of a coral reef to survive—something zoanthids will not provide. And some zoanthids are toxic in a way corals aren’t. “These things are pretty nasty,” Johnson says. “There aren’t many things able to eat them.”

That said, Johnson admits that it’s hard to predict the nature of a zoanthid-dominated ecosystem because such places do not currently exist. “Maybe there will be positive effects that we don’t know about yet,” she says.

Zoanthids aren’t the only species that may thrive in the warm, acidic seas to come. Johnson is also studying how several algae species—including calcifying algae that also contribute to reef building—will react to acidification.

By understanding the winners and losers in acidic seas, Johnson hopes to paint a clearer picture of what reefs of the future may look like—for better or worse.