Twice the size of a domestic house cat and formidable hunters, fishing cats are one of the most vulnerable wild cats in India, according to the International Union for Conservation of Nature. Photo by Roland Seitre/Minden Pictures

When Subrata Maity, a tutor in the Howrah district of West Bengal, India, was checking the camera traps he’d installed throughout his village, he discovered that one had gone missing. For the past 10 days, Maity had put his trap in the same spot, hoping to catch a glimpse of the elusive fishing cats that prowl through the area.

Fishing cats are a distinct and curious species—and not just because they’re comfortable getting wet. Of India’s 15 species of wild cats, they’re the only one that thrives in the country’s brackish wetlands. The feline predator is twice the size of a domestic cat and smaller than a tiger—they look almost like an overgrown ocelot. True to their name, fishing cats are exceptional swimmers, and chase down fish, rodents, and reptiles in the riverine floodplains of the Ganges, Yamuna, and Brahmaputra Rivers; the Sundarbans delta; and throughout small coastal wetlands on the Bay of Bengal.

But research on these cats is sparse. To date, there have been no extensive studies on the animal’s ecology and distribution. It’s a situation that Maity is helping rectify.

Maity is working with Shreya Bhattacharya, a graduate student at Bharati Vidyapeeth University, and Tiasa Adhya, a wildlife biologist with the International Union for Conservation of Nature. Adhya is spearheading the project to track fishing cats in the states of West Bengal and Orissa, and her team consists of a coalition of village and state officials, community members, scientists, and NGOs. The more the coalition can learn about the cats, the better they can direct future conservation efforts. It’s the first time fishing cats have been studied in the wider ecosystem, outside of the area’s few protected areas.

According to Adhya, there has never been a reliable estimate of the fishing cat population. A survey conducted in India’s Coringa Wildlife Sanctuary, a 235-square-kilometer area that is among 13 protected spaces for the cats, suggests there may be as many as three cats every two square kilometers. But extrapolating to the full population is difficult.

Part of the problem is that the cats are mostly nocturnal and shy away from human settlements. For their survey, the researchers drew on local knowledge, the camera traps, and observations of scat and track marks to estimate the number of cats in 18 villages in the Howrah district.

In these small villages, which are seasonally inundated with monsoon rains, the local practice of cultivating reeds and maintaining small fishing ponds creates refuge and a ready supply of food for the fishing cats. But their presence is not always welcome. The cats are blamed for pulling fish from the farmers’ ponds—a behavior sometimes met with retaliatory killings.

In 2016, local leaders submitted a proposal to the West Bengal Biodiversity Board to declare a 30-square-kilometer area of the Howrah district a biodiversity heritage site for the fishing cats. Adhya’s project could help bolster the case.

The survey has been running since March 2017. In the long term, Adhya hopes the data will let them better estimate the cat population, and separate fact from fiction about the cats’ behavior.

Bhattacharya says the traps have unveiled some particularly interesting tidbits about the cats. 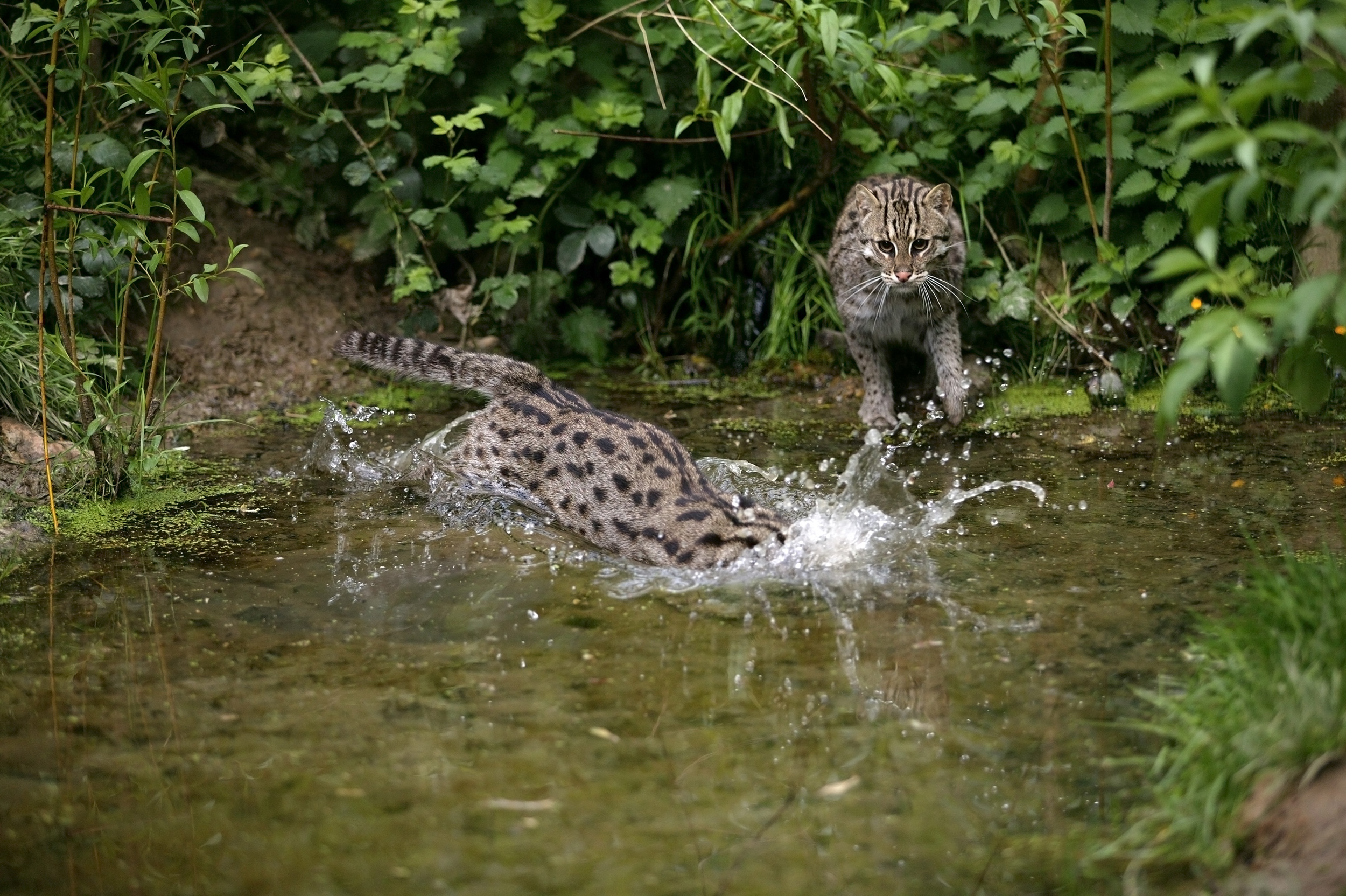 Fishing cats are skilled swimmers, and can chase down fish in the water. Photo by Gerard Lacz/Minden Pictures

But the cameras have also revealed something else—not about the cats, but about human behavior.

A week after it went missing, Maity’s camera was discovered in a field—damaged and without its SD card. The nature of the damage, combined with footage from other cameras, helps explain the camera’s demise. One camera caught thieves poaching fish from farmers’ ponds in the middle of the night. Such losses are often blamed on the cats.

“The hunting process of a fishing cat is cumbersome,” says Adhya. “It involves waiting patiently and often walking away without any luck—contrary to villagers’ perceptions that fishing cats take fish every day.”

Over the past 20 years, nearly half of Howrah’s wetlands have been lost to development. Combined with poaching and retaliatory killings, India’s fishing cats are under threat.

In the disconnected islands of marshland that remain, these enigmatic cats are holding onto a tenuous existence.