Coastal creatures such as oysters don’t follow a 24-hour circadian cycle. Instead, they go by a 12-hour cycle tied to the tides. Photo by Juniors Bildarchiv GmbH/Alamy Stock Photo

Having jet lag is a miserable experience responsible for problems ranging from exhaustion to, according to one claim, the Suez crisis. If you’ve experienced jet lag, you’ve felt the power of the circadian rhythm, the master molecular clock by which sleep hormones, immune responses, blood sugar levels, and more rise and fall. All animals, plants, and even fungi seem to have an internal rhythm. A 24-hour period is the most common, but some creatures live by a different clock. Coastal marine animals have a circatidal cycle. It lasts about 12 hours and keeps pace with the tides.

Since the 1970s, there’s been fierce debate about whether the circatidal cycle is controlled by the same genetic mechanism as the circadian rhythm or whether it’s an entirely different biological clockwork. “Until now, nobody has found what we could call a tidal clock gene,” says Damien Tran, a research biologist with the French National Centre for Scientific Research who set out to pinpoint which genes control circatidal rhythms in 2018.

His latest work, a study on oysters that involved affixing several small black electrodes to their shells, suggests circatidal and circadian rhythms are one and the same.

The electrodes were measuring the tiniest movements of the shells, and Tran was honed in on the opening and closing of the oysters’ valves. This is one of the only visible movements an oyster has and, crucially, it’s a behavior driven by the oyster’s circatidal cycle.

As Tran watched the undulating valves, he sampled the oysters’ tissues and measured the activity of the genes known to drive the circadian rhythm. 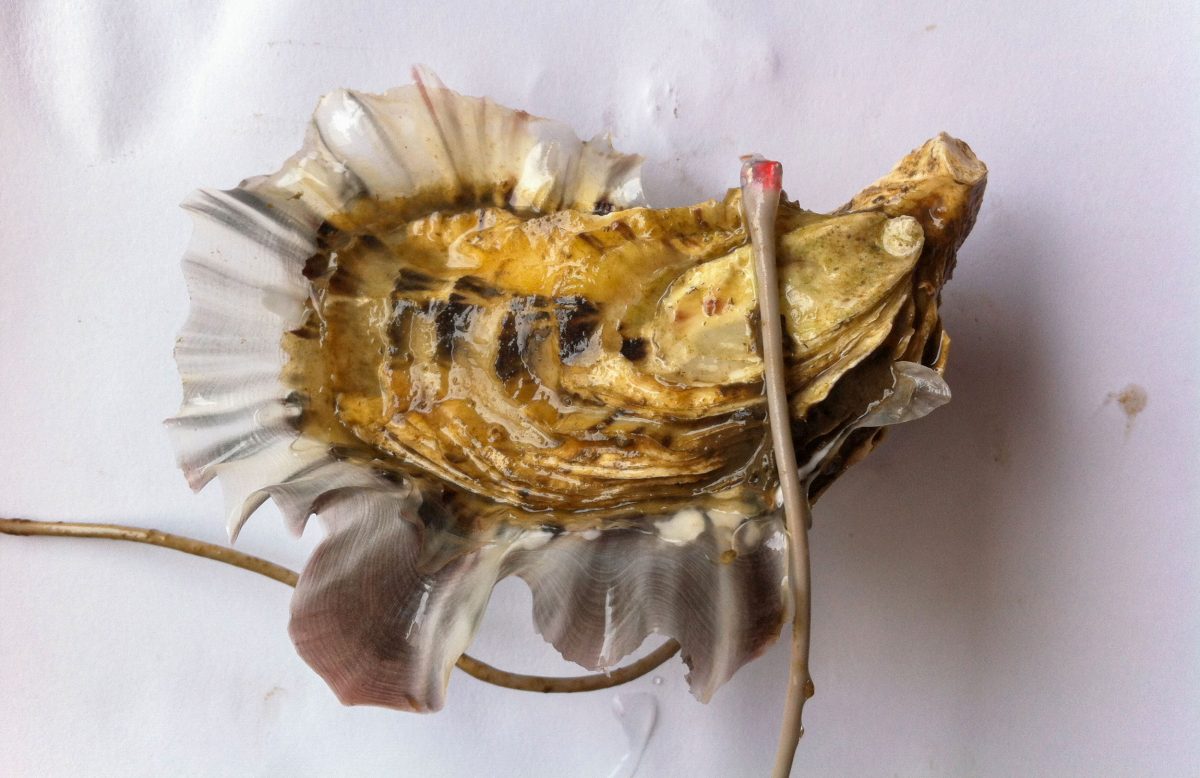 Wiring oysters with electrodes gave research biologist Damien Tran a way to measure every little twitch of their valves. Photo by Damien Tran

At the most basic level, two core sets of genes control a circadian rhythm. One set, comprised of the genes BMAL1 and CLOCK, produce a protein that turns on a second set of genes, PERIOD and TIMELESS, which produce another protein that turns off the first two genes. These four genes fluctuate through one cycle in about 24 hours, regulating systems like hunger, immune function, sleep, and other systems.

David Wilcockson, a marine biologist at Aberystwyth University in Wales who studies circatidal molecular clocks in crabs, says understanding these tidal rhythms can help us understand if and how human activities affect coastal ecosystems—particularly animals with circatidal, or even lunar, rhythms.

While these rhythms are internal, the outside world plays a role. Sunlight, for instance, can turn on other genes that modulate the circadian cycle—that’s why humans can adjust to jet lag. Circatidal animals have additional triggers, such as changes in water pressure or the vibrations of waves. We know that coastal city lights, both right at the shore and the more-diffused skyglow, mess up marine animals’ circadian and lunar rhythms. If we want to avoid disrupting circatidally-rhythmed members of the coastal environment as well, it’s vital to know how they are controlled and cued.

So why have clocks in the first place? Wilcockson says they save organisms energy through automation. Internal rhythms, he says, help you “anticipate and forecast when changes in your environment are going to occur … so you’re ready for them, instead of just responding to them.”

He says the new paper offers welcome data on the genetic basis of these clocks, though the data’s not yet conclusive since all the genes involved in mollusk rhythms aren’t fully known. Tran’s paper notes that just because the core genes are moving in sync with the valves, it doesn’t rule out that some unknown master circatidal clock isn’t controlling them. After all, he writes, animals evolved in the ocean facing both daily and tidal cues.

Tran will now study other species using the same techniques. By further matching gene activity to animal activity, he hopes to get a more complete survey of the genes keeping circatidal rhythm.

So don’t feel too bad the next time you travel and are trying to summon the willpower to stay awake—your body’s just trying to get you back in rhythm with your world, wherever in the world you are.