Mary-Louise Byrne first set foot on Sable Island in 1987. Then a graduate student, Byrne came to Sable, off the coast of Nova Scotia, Canada, to measure some of the 42 kilometers of sand dunes that make up the island. Dragging heavy gear up sandy slopes, Byrne and her colleagues measured cross section profiles of the island’s dunes, capturing their shapes and positions in intricate detail.

Nearly three decades later, Byrne has traded her handmade measurements for high-resolution aerial photographs and lidar topographic images captured by another scientist, David Colville. Both approaches have allowed her to analyze the details of Sable Island’s bumps and valleys. And, after all this time, Byrne has come to realize something surprising: against the odds, some of Sable Island’s dunes have barely budged.

Barrier islands are traditionally ephemeral places. Little more than towers of sand piled high in the ocean, these islands, which are often long and narrow, are constantly shaped and reshaped by battering waves and whipping winds. Near-constant erosion and deposition means barrier islands have a tendency to crawl across the ocean like dunes in the desert. While Sable Island is farther from shore than a true barrier island, it’s thought to be a remnant of one that formed in the last Ice Age—and it’s subjected to many of the same erosional processes. Transience is such a big part of barrier island dynamics that Byrne’s discovery that some of Sable Island’s dunes have scarcely changed in nearly 30 years has scientists puzzled.

Understanding what makes Sable Island so different from other barrier islands could yield important clues that may help protect against coastal erosion elsewhere. But to figure that out, scientists need to move quickly. In just the past few years the Government of Canada has started to let tourists explore the sandy island, which is home to a population of wild horses. There is a concern, says Byrne, that all of these extra trampling feet may finally force Sable Island’s unusual dunes to shift.

Sable Island isn’t completely unchanging. The eastern spit of the island, for example, grew five kilometers since 1996, but the sea has since reclaimed most of the new length. Yet according to Byrne’s analysis, presented at a scientific conference in Montreal in May, some of the island, and its dunes, were right where she had observed them 28 years before.

Four of her initial surveys are almost identical to the new data, Byrne explains. “The heights of the dunes are the same, and the distribution of the peaks and valleys of the dune system across the island is very similar.”

The island’s recent stability isn’t just a fluke. In 1992, David Gray, a geodesist, compared six surveys taken over 200 years and found that while the tips of the island have changed shape, the island itself hasn’t moved much. This is in contrast to the other barrier islands along North America’s eastern seaboard. From New York’s Fire Island to Cape Cod, residents are being forced to face the reality of the transitory nature of barrier islands as lapping waves wash away their lands.

Sable Island is a barren place. Its name comes from the French word for sand, and unlike the million-dollar homes on Fire Island, that’s pretty much all that’s there now. Small freshwater ponds sustain the island’s wildlife, including the famous Sable Island horses. Loose wisps of vegetation give the horses something to eat—grasses that also help keep the sand in place. But according to Byrne, some of the dunes have no vegetation at all and nothing really anchoring them. Their relative constancy is a mystery. 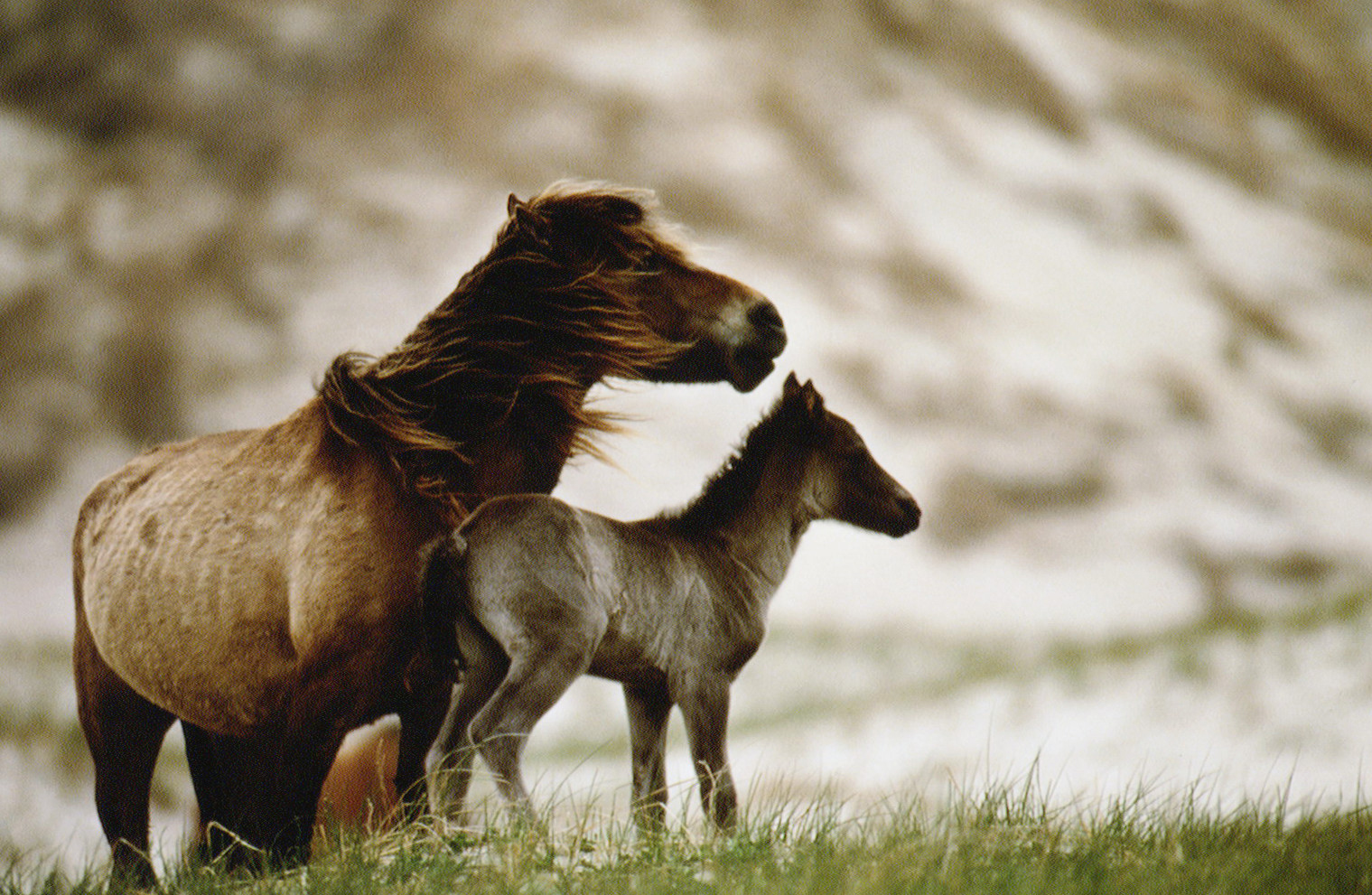 Sable Island’s horses are thought to be the descendants of those confiscated from the Acadians expelled from the mainland during Le Grand Derangement. Photo by Pierre Perrin/Zoko/Sygma/Corbis

The past 30 years have been kind to Sable Island’s geography, but the next few decades may bring new challenges.

In 2013, Parks Canada made Sable Island a National Park Reserve, opening the region to visitors. Yet the designation also brings the federal government’s pledge to ensure “that Sable Island receives the highest level of protection for its natural and cultural features.”

While Byrne understands that Parks Canada must create a visitor experience for Sable Island, she says that people shouldn’t just be allowed to wander about freely. In that regard, as one of several efforts to protect the natural environment, Parks Canada is limiting the number of visitors that will be allowed to visit the island says Eric Magnan, a media relations officer with Parks Canada.

It would be nice to know what is going on with Sable Island, since sand dunes are an important part of any coastal ecosystem. But for now, the island is refusing to give up its secrets. “I can’t explain it, because I really thought we’d see huge differences all over the island,” says Byrne. If they can figure it out, however, “[a]ny knowledge of what’s going on in the dune system in Sable Island can be transferred to coastal dune systems anywhere.”