A prototype floating dairy farm in Rotterdam, Netherlands is home to 35 dairy cows. In the future, similar platforms will be set up nearby to grow vegetables and farm eggs. Photo by Floating Farm

A résumé for the Netherlands would list water management and the development of advanced agricultural technology among its top skills. The country is one of the smallest in the European Union and has more people living below sea level than any other country in the world. Yet, it is among the world’s largest exporters of food by value.

It makes perfect sense, then, that the world’s first experimental floating dairy farm—the culmination of a seven-year, US $2.9-million effort—is sited in the industrial and warehousing area of Rotterdam’s active Merwehaven harbor.

Late last month, handlers anxiously introduced 35 Meuse Rhine Issel cows, a breed native to the Netherlands, to the two-story floating platform. Worries that the cows would get seasick or be reluctant to cross the bridge onto the platform proved unfounded, and the animals have adjusted to the change of scenery and are producing milk on their new floating home.

These bovines are trailblazers in the increasingly important quest to find new and better forms of sustainable urban agriculture, says Peter van Wingerden, a Dutch engineer and the founder of Beladon, the company behind the project.

The idea for the Rotterdam farm came to life in 2012, when van Wingerden was working in New York City as Hurricane Sandy hit. Damaging floods crippled parts of the city and brought food distribution by truck to a halt. The experience galvanized van Wingerden to turn his previously vague ideas about growing food on the water into a passion project.

“I see this as a substantial way to produce food close to consumers,” van Wingerden says. He sees floating farms as a way to ensure food is always nearby while simultaneously reducing the costs of transportation. “It’s not the 100 percent solution, but part of a hybrid model.” A floating farm is “part of a circular city,” he adds. 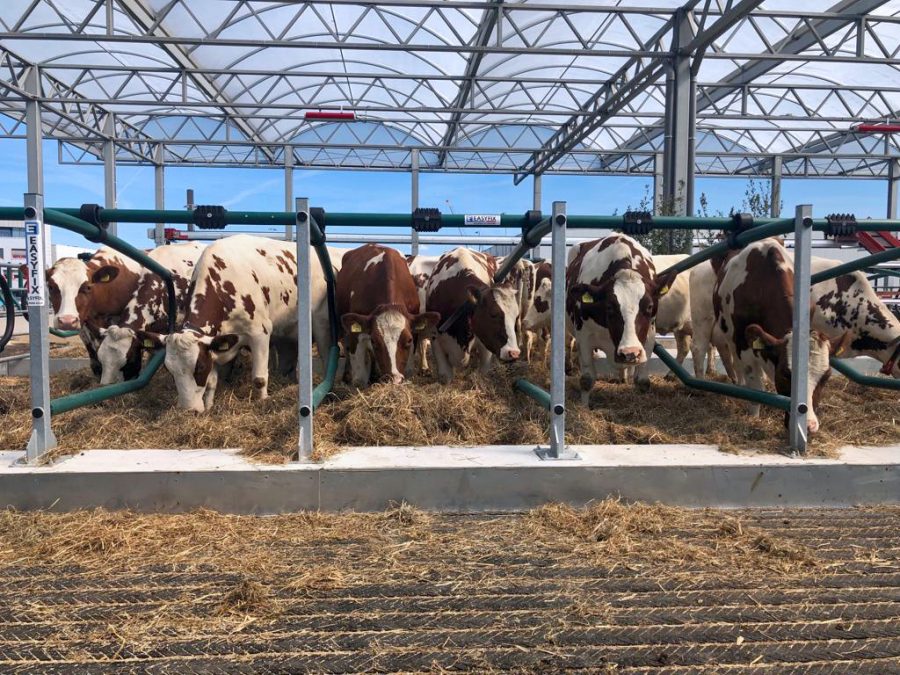 Eventually, the cows living on the floating farm will be fed grass clippings and food scraps from Rotterdam businesses. This choice is an attempt to make the farm part of a circular flow of resources within the city. Photo by Floating Farm

This begins with the cows’ diet. Ultimately, the animals will feed on food waste from the city, such as grain and potato peels from breweries, and grass clippings from sports fields and golf courses. The switch to local biological waste from their previous feed is being done gradually to help the cows acclimate.

The circularity is also seen in the platform’s design. The cows live on the farm’s top floor, where a robot collects their waste and pushes it to a collection point which carries it down to the first floor. There, a machine separates the salts from the urine. Along with the manure, the salts are used to fertilize a field on land near the platform on which the cows graze. About 90 percent of urine is water, and this is treated and discharged into the harbor or reused as process water.

The cows’ milk can be purchased from the farm and 23 retail locations around the city. Delicious and rich, it needs a good shake to dissolve the fat. When the farm reaches its planned capacity of 40 cows, it will produce roughly 800 liters of milk per day. (In the Netherlands, the dairy industry is concentrating into fewer, bigger farms. As of 2017, more than a third of farms had more than 100 cows producing roughly 2,300 liters of milk per day.)

Van Wingerden says his company is planning to build two more floating platforms next to the dairy farm, one to grow vegetables and another with chickens to farm eggs. Construction will start late this year for completion in summer 2020. 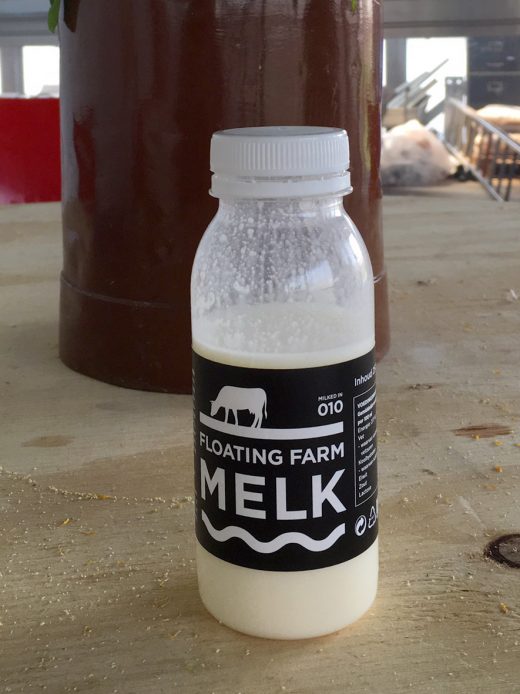 The milk produced is for sale on the farm and at nearby stores. Photo by Braden Phillips

The greatest engineering challenge in building the platform was ensuring its stability while supporting the dynamic weight of a herd of cows in a harbor where the tidal swing averages 1.65 meters, van Wingerden says. So far, the design seems to be a success.

The idea of sophisticated floating farms has been making the rounds for years, but all the sketches and ambitious intentions have been thwarted by high costs and uncertainties inherent in trying something so new.

That was the case for Beladon’s dairy farm, too. The Rotterdam government and the city’s port authority both took a dim view of the farm’s feasibility and chose not to offer any subsidies. Van Wingerden used his own money, funds raised from private investors, and a bank loan to get the farm built.

With a successful prototype afloat, the mayor’s office has since embraced the farm. The prototype farm has also garnered growing international interest. Van Wingerden says Beladon is in discussions to build platforms in Singapore and the Chinese cities of Nanjing and Shanghai—though it’s undecided whether the farms will be for cows, vegetables, or eggs. The company has also seen interest from Cape Town, South Africa, and New York City, Los Angeles, and New Orleans in the United States, among other cities.

Apart from the food it produces, van Wingerden sees the farm’s educational value, especially for children, as one of its greatest virtues. “It’s important to show people in cities that agriculture is our daily food source,” he says.

Be that as it may, there is debate within Rotterdam about the farm’s real impact.

Nick van den Berg, development manager for the Rotterdam Food Cluster, a municipal project to develop sustainable agriculture, greenhouse technology, and food logistics, says the floating farm is more of an attention-grabber and talking point than anything else.

“I think it’s a showcase, but not a business model,” he says. Van den Berg is a proponent of vertical farming—growing crops in stacks or on the sides or roofs of buildings—but draws the line at putting livestock on the water. “I truly believe the cattle must live in open fields and not on floating farms.”

“Every bit we can do to reduce food losses and the pollution from transporting foods helps,” he says.

Eighty percent of Rotterdam sits below sea level, and the city wants to become 100 percent resistant to climate change by 2025. Arnoud Molenaar, the city’s chief resilience officer, thinks the floating farm contributes to that goal. “It’s an innovative example for a lot of other delta cities in the world,” he says.

Whether the floating farm technology will ultimately scale to the extent that it can make a real dent in food production remains to be seen. But now that the farm is working, people are starting to reconsider their preconceptions.

“At first it sounds fantastical, expensive, and impractical,” says Sarah Gardner, an agricultural policy researcher at Williams College in Williamstown, Massachusetts. “But I’ve come to appreciate this project as a brilliant engineering solution to a growing world crisis: producing food for almost 10 billion people by mid-century on a shrinking land base.”