If you drive north from Adelaide, Australia, for five hours, you’ll come upon a curious stretch of fenced-off outback: 123 square kilometers of dry red earth, dotted with tufts of grass and small shrubs, that extends into the gently sloping horizon. In the day’s heat, the area appears lifeless, as animals hide from the Sun beneath bushes or inside burrows and scrapes. It looks like, well, the Australian outback.

At night, however, the uniqueness of this place—and the reason for the fence—becomes apparent. As the air cools, small marsupials emerge from their hideouts to scamper across the soil. These are not just any marsupials, they’re burrowing bettongs and western barred bandicoots: two species of rodent-like mammals, each barely taller than your ankle, that are extinct in the wild on the Australian mainland.

Both marsupial species were pushed to the brink of extinction, like so much of Australia’s native wildlife, after European colonists introduced feral cats and red foxes to the continent in the late 18th century. Today, they survive only at a few remaining refuges: in fenced reserves and on small islands.

Cats and foxes have had such a destructive tear through Australia because bettongs, bandicoots, and other small marsupials are not evolutionarily equipped to survive them. They can’t outrun cats and foxes, and may not even recognize them as predators; they simply don’t have the tools to compete. But now researchers, including restoration ecologist Katherine Moseby, are wondering if it might be possible to give them the tools.

In an ambitious experiment, Moseby and her colleagues at the nonprofit conservation organization Arid Recovery have begun to harness the power of natural selection to create a population of bettongs that they hope can one day stand up to the cats.

“When we go around putting all those animals behind fences without cats and foxes, we’re not really helping them in the long term,” says Moseby, who for the past 20 years has been part of the (often failing) effort to reintroduce Australia’s endangered marsupials to the outback.

“We got to the point where we’re thinking: maybe we need to start looking at it from the prey’s point of view rather than just the predator’s point of view,” she says. “Is there anything we can do to the prey to try to make them better able to cope with these predators?”

So, in the Australian desert, Moseby set up a 30-square-kilometer pen holding hundreds of bettongs—along with a few radio-collared feral cats. The cats hunt as they will, killing the marsupials that can’t cope. “We want some of the dumber ones to be picked off,” she says. The idea is that any bettongs that can evade cats will survive to breed and, hopefully, pass on their survival skills to their young. 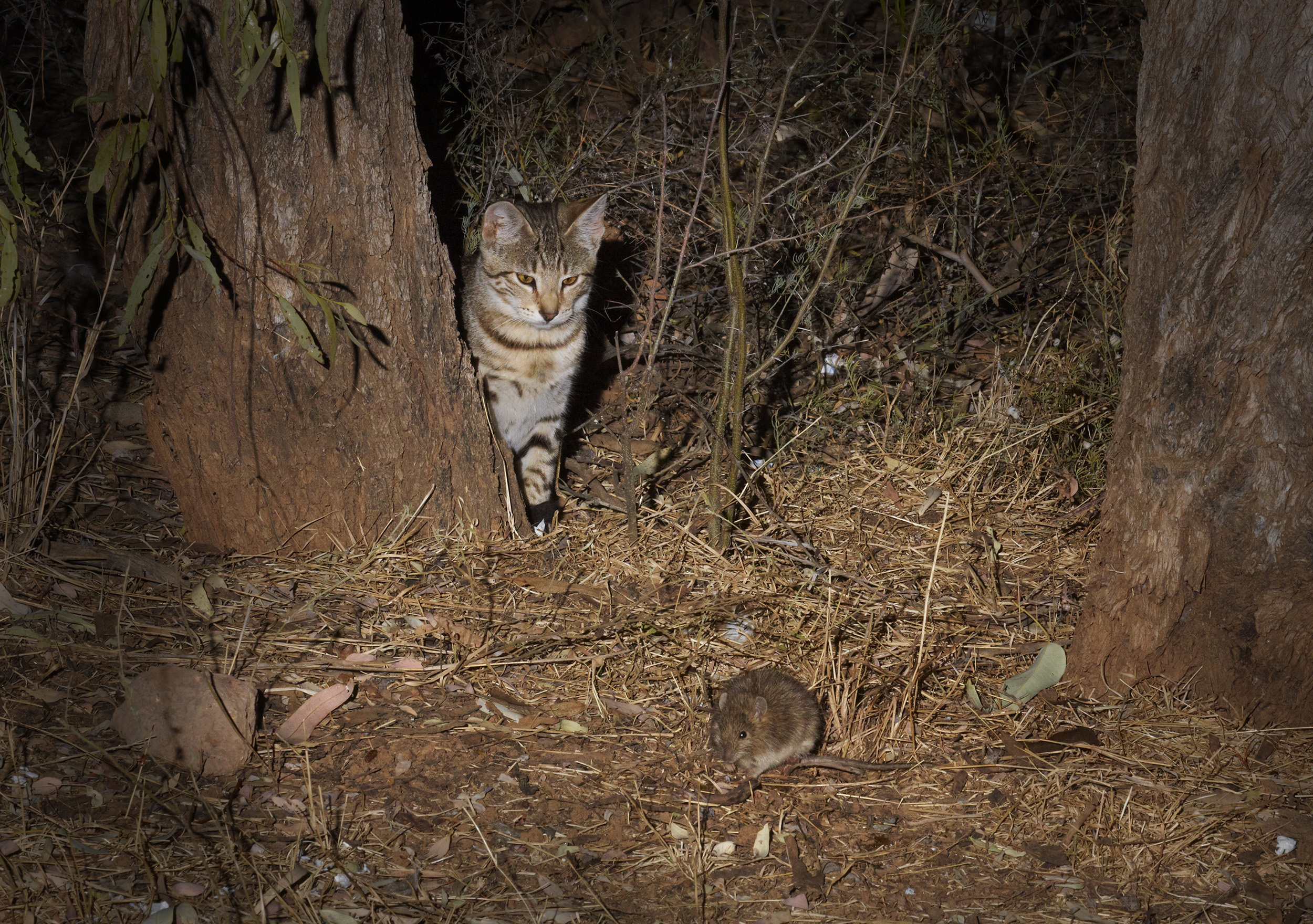 Introduced feral cats often take a hard toll on native island populations in part because, after centuries or millennia of isolation, some species don’t recognize the cats as a threat. Martin Willis/Minden Pictures/Corbis

It’s been only one year of an experiment that could take a century, but Moseby tentatively shares her early observations: “We’re starting to see that the bettongs in with the feral cats are increasing their vigilance,” she says. “They’re a lot more cautious when they’re approaching their food.” It will take many patient years to find out whether the approach works.

If it does, other predator-naive animals on islands could be trained to resist invasive species, Moseby suggests.

Yet other researchers are less sure. For most small islands, “it would just be easier to eradicate the [predators],” says restoration ecologist Holly Jones from Northern Illinois University. But she concedes that there’s no good solution at the moment for bigger islands like Australia. “If you have a critically endangered species, my view is anything that might have a chance of working we should try,” she says.

“I think it’s a hopeful idea,” says Doug Armstrong, a reintroduction biologist at New Zealand’s Massey University. He notes that similar experiments have unofficially occurred at fenced reserves for a long time. “You try to put up what you call a predator-proof fence, and what that means is that mammals don’t get in very often,” he says. Enhanced predator avoidance hasn’t been noted at these sites, but no one has really looked, either. Arid Recovery’s project is tracking both predators and prey, and will be the first rigorous study of this idea. “They’ll be getting new data that nobody’s collected before,” he says.

For Moseby and her colleagues, inducing natural selection is the most realistic way forward. They’ve spent decades watching their nearly extinct native fauna perish in the jaws of wily cats and foxes. Now they’re doing it again—but this time, they hope the suffering will lead to survival. “Cats and foxes are here to stay in Australia in the long term,” Moseby says. “Towards coexistence, is probably a way of looking at it.”