A polar bear that has just emerged from the Beaufort Sea gazes at the skull of a bowhead whale. Photo by Accent Alaska.com/Alamy Stock Photo

On a cool mid-September day in 2013, a dead bowhead whale lay decaying on the shoreline of Alaska’s southern Beaufort Sea. Nearby, a team of biologists watched as, one by one, lean polar bears padded into view and moseyed up to the blubbery, boney carcass, hungry and eager to gorge on whatever morsels remained. By evening, the researchers had counted 80 bears—the most ever seen in a single day in the area.

This massive convergence of vulnerable polar bears—animals that most often wander the Arctic landscape alone—was a record-breaking event. But more than that, it was a sign of a drastic change taking place in the southern Beaufort Sea.

Prior to 2000, polar bears in the southern Beaufort spent nearly the entire year on sea ice over the continental shelf, where they hunted for ringed and bearded seals. The only time bears came onto land was in late summer and early fall, for short exploratory visits. But since the late 1990s, the open-water period—the time of low sea ice concentrations over the continental shelf—has lengthened to roughly three months, about 36 days longer than normal, forcing the bears to spend more time on land.

For each decade of the study, the amount of time the bears stayed on land grew by a week on average, to an additional 31 days total.

In parts of the Arctic around Hudson Bay, polar bears are more accustomed to living on land and fasting or feasting on sea birds. But for the southern Beaufort bear population adaptation is more of a struggle.

From 2004 to 2007, the bear population shrank from about 1,500 to 900, says Todd Atwood, the scientist with the United States Geological Survey who led the research. That was a 40 percent decrease before their numbers stabilized for a two-year period, before slowly falling again. Unlike their counterparts in the Chukchi Sea, southern Beaufort polar bears have lower weight, worse body condition, and poorer cub survival.

Though the land has served as a bit of a buffer, preventing the population from collapsing, the transition could be a ticking time bomb in terms of human-polar bear conflict. 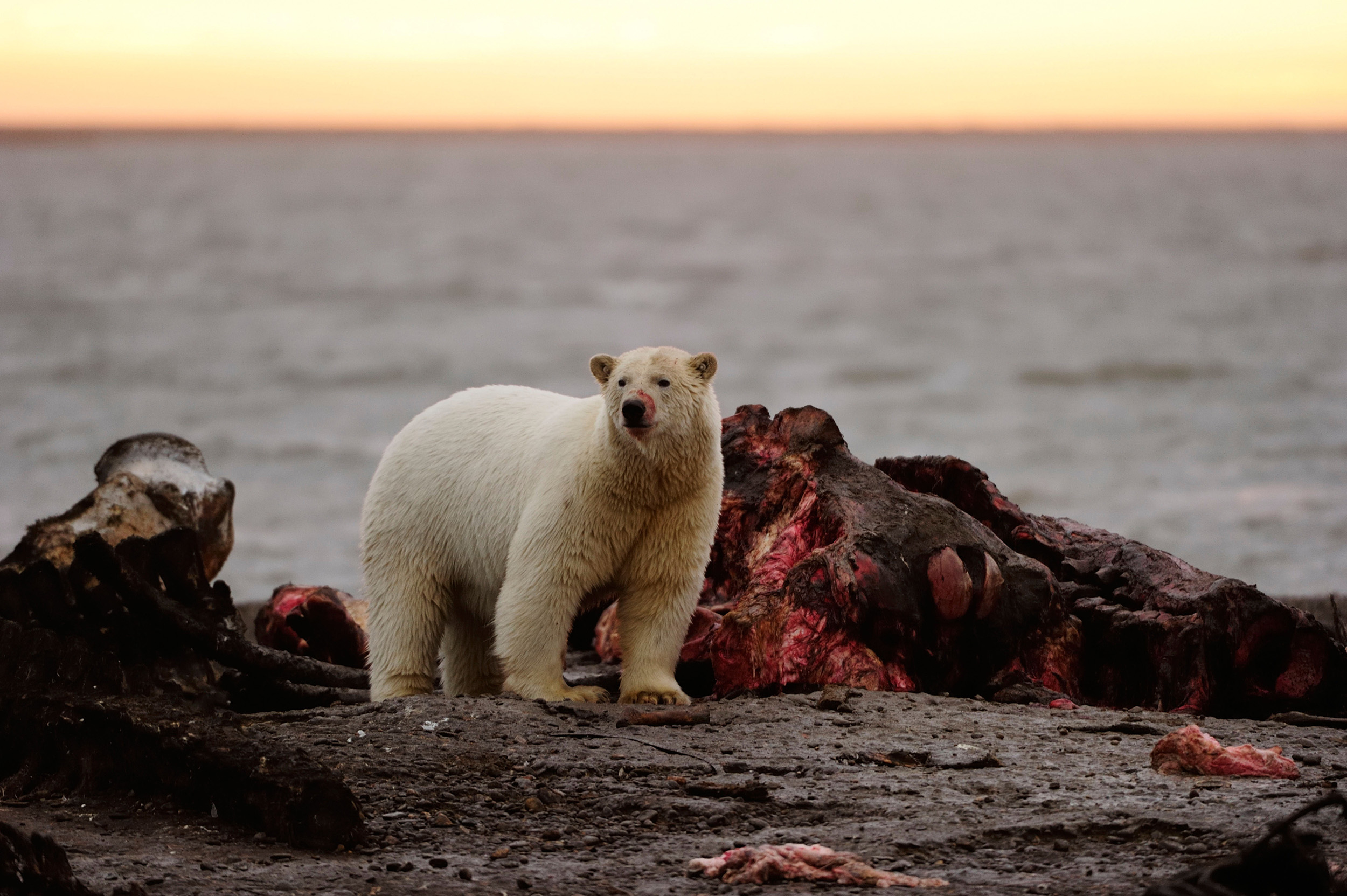 A polar bear scavenges from a whale carcass outside Kaktovik, Alaska. Photo by imageBROKER/Alamy Stock Photo

Bears coming ashore have adapted by feeding at whale bone piles routinely left by indigenous Alaskans after the fall hunting season. But Atwood worries this situation is unsustainable in the long term. “Whaling quotas are fixed. A village like Kaktovik gets three whales each fall. That’s probably not going to increase through time,” he says.

But the number of bears coming ashore likely will increase. And when those bone piles run out, bears will follow their noses to the next closest food source—human communities.

Kaktovik has been proactive in its bear management, using non-lethal means to keep bears away from town and hiring members of the community to patrol the bone piles 24/7 come autumn. Industry in the region, however, can be less tolerant, Atwood says.

In 2011, a British Petroleum security guard shot and killed a female polar bear on Alaska’s North Slope. It was the first bear killed by an industry worker since 1993, but it will likely not be the last. In the past decade, the number of bear sightings in the Alaskan oil patch has risen dramatically. For example, in 2008, there were 313 sightings—four times the 1994 to 2000 annual average.

Ultimately, Atwood says, polar bears are primarily fueled on fat, and can easily pack on 45 kilograms simply by picking at whale bone piles. Though some may be able to kill the odd nesting bird, they won’t be able to stay healthy in the long term without marine mammals. But right now, their future looks shaky: either they starve or get shot.