Today it’s the hoodoo-spotted desert of the Grand Staircase-Escalante National Monument, but 75 million years ago Utah used to sit on the shores of an ancient ocean. Photo by roycebair/RooM the Agency/Corbis

Parasaurolophus is charismatic in its own goofy way. This genus of dinosaur, which lived 75 million years ago, is immediately recognizable from the long, hollow crest that juts out of the back of its skull. This ornament wasn’t just for show. Sonic reconstructions suggest that Parasaurolophus may have used its crest to make low, booming calls like those of a foghorn. The fact that we can now “hear” this hadrosaur has helped make it a classic, but, really, we’re only just getting to know it. As has been happening for a number of other beloved dinosaurs lately, Parasaurolophus is having its story rewritten. Based on new research, the number of Parasaurolophus species that once existed has come into question. Solving that puzzle is the latest step in trying to understand yet another mystery: what drove the evolution of the bizarre dinosaurs of America’s lost coast?

Back in the Late Cretaceous, when Parasaurolophus could be heard trumpeting across the ancient landscape, a vast tongue of salt water—the Western Interior Seaway—split North America in half. The seaway stretched from the Arctic to the Gulf of Mexico, spanning the width of Utah to Kansas. The eastern continent was Appalachia; the western Laramidia. And while the precursors to the Rocky Mountains began to rise in Laramidia, dinosaurs and other forms of life thrived in swampy lowlands that more closely resembled Louisiana than the modern Utah desert.

Many of the dinosaurs that inhabited this lost coastline are unique. Over the past two decades, paleontologists working in Utah have uncovered numerous dinosaurs—tyrannosaurs, horned dinosaurs, “raptors,” and more—that belonged to different species, perhaps even more distant lineages, than those previously found in Montana, Alberta, and Alaska. Utah’s distinct species are an example of what paleontologists call “provincialism”—new species evolved in specific geographic pockets, isolated from related species that lived at the same time. But, as researchers are now discovering, Parasaurolophus may prove an exception to the rule. 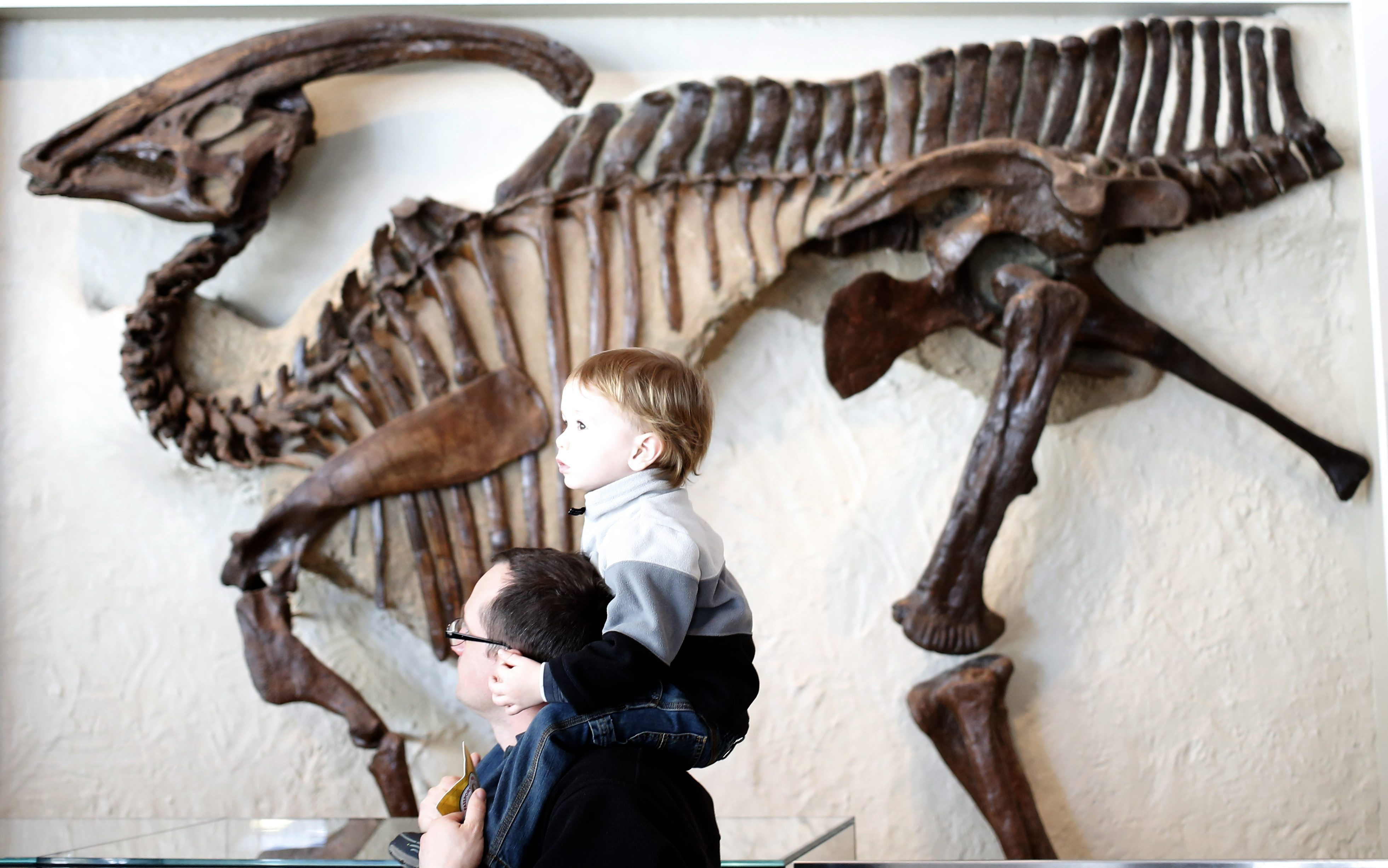 A fossil of Parasaurolophus walkeri at the Royal Ontario Museum in Toronto. Photo by Stephen Morrison/epa/Corbis

In recent years, however, many more Parasaurolophus skeletons have been found in the high desert, tucked away in vast formations of gray sandstone of Utah’s Grand Staircase-Escalante National Monument. For now, the particular species to which these bones belong remains unclear. Figuring that out, says paleontologist David Evans, could help scientists understand how a vanished coast supported an explosion of dinosaur evolution.

“If you’re looking for the species [that is] the poster child of provincialism, the Utah Parasaurolophus is not one of them,” Evans says. New specimens dug up in Utah, particularly of fully-grown animals, show little difference from the Parasaurolophus walkeri that Parks found in Canada nearly a century ago. “We still have a lot of work to do,” Evans cautions, but “[i]f the Utah species is not walkeri, then it’s extremely close.”

If the Utah Parasaurolophus is actually Parasaurolophus walkeri, then that would throw a monkey wrench into one of the favored ideas about why dinosaurs from the ancient coast differed from north to south. Based on the dramatic differences between the tyrannosaurs, horned dinosaurs, and others, some paleontologists have proposed that there were physical barriers that isolated dinosaur populations and forced new species to evolve in their own little pockets. Perhaps there was a river system, or part of the early Rockies range, that blocked their way.

But if the Canadian and Utah Parasaurolophus are the same, or nearly so, then this would suggest that there were no such barriers. The dinosaurs would have been able to walk up and down the coast as they pleased. But apparently most of them did not. Other dinosaurs really do show dramatic differences along the latitudes. And without evidence of a physical barrier, Evans says, something else must have been the spark for evolutionary novelty.

Paleontologist Tom Lehman, who was one of the first to recognize dinosaur provincialism, suggested that habitat preferences may have been the reason why species differed. Evans thinks Lehman was on the right track. Dinosaurs might have been sensitive to environmental change and preferred particular habitats that were limited in range. This might explain why even Parasaurolophus was rare in the north but common in the south, Evans speculates. In short, alterations to climate and sea level would have influenced vegetation and other characteristics of local habitats, and “[m]any of these dinosaurs were in fact very sensitive to these types of changes,” Evans says. In places that have been studied for a long time, such as Dinosaur Provincial Park in Alberta, you can see the species come and go with the ever-shifting ecology.

Whether physical barriers or habitat preferences created the differences among the dinosaurs that inhabited this ancient coast is up for debate. But Evans is curious about what his Parasaurolophus might say. “I like some of these hadrosaurs potentially being the same species,” says Evans. It hints that these dinosaurs evolved or went extinct due to the unforeseen changes to the habitats they felt most cozy in, and this, Evans says, tells us far more about dinosaur biology than if the prehistoric creatures simply encountered a river they could not cross. In time, as more details are pulled from their bones, the dinosaurs may explain how the changing coast molded the latter days of their reign.