The island of Kiritimati, Kiribati, is in the heart of “El Niño country.” Photo by Universal Images Group North America LLC/Alamy Stock Photo

Every summer since 1997, Kim Cobb has left her home in Atlanta, Georgia, and made the 8,324-kilometer trip to the equatorial Pacific. There, for months out of the year, Cobb spends her time diving over the rich green and yellow reefs of the Kiribati archipelago, or wandering the rubble beaches of Kiritimati (Christmas Island). But this is no vacation. With a hydraulic drill, temperature sensors, and a vast collection of corals—both living and fossilized—Cobb is working to crack one of the trickiest problems in climate science: how the often-devastating El Niño will change as the planet warms.

There’s a reason Cobb’s first trip was in 1997. That year, fueled by a complex dance of failing winds and warming seas, the most powerful El Niño on record threw the Pacific Ocean into chaos. El Niños “just wallop the planet,” Cobb says. The phenomenon, which gets its start when warm seawater stagnates in the eastern Pacific, wreaks havoc on marine ecosystems and fuels droughts and floods across the world.

The 1997-98 event, which occurred when Cobb was a first year graduate student, caused more than US $35-billion in global damages and killed around 23,000 people through storms and famine. The most recent El Niño, which lasted from 2014 to 2016, helped push the planet to previously-unseen temperature extremes, causing massive coral bleaching and unprecedented melting at the poles. 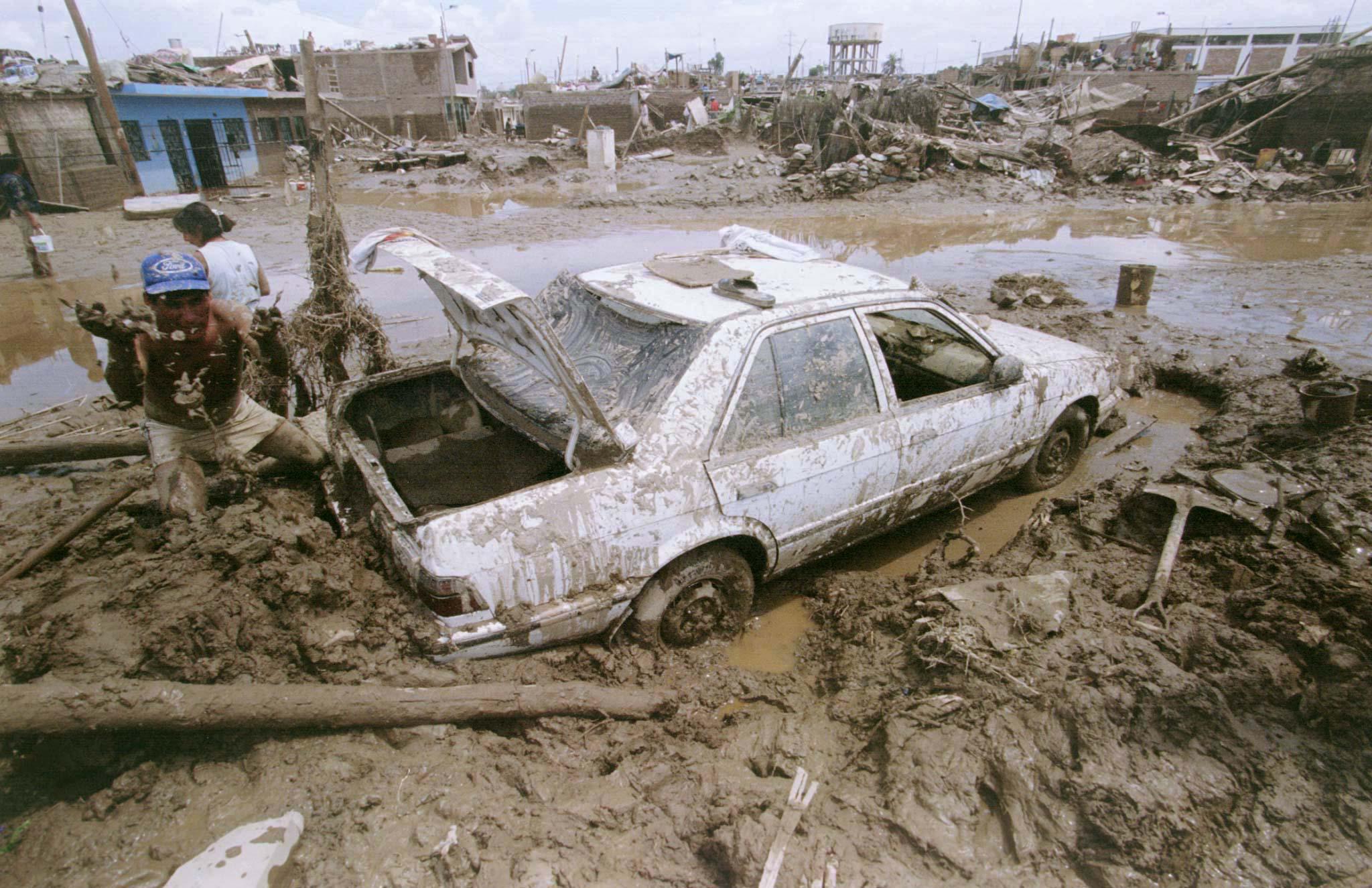 A resident of Ica, Peru, wipes mud from his car after devastating flooding—emboldened by El Niño—hit the city on January 30, 1998. Photo by Reuters/Alamy Stock Photo

With ocean temperatures rising across the planet because of anthropogenic warming, climate scientists suspect that climate change might make for more destructive El Niños. To date, researchers have had trouble confirming this supposition: the historical climate records locked in tree rings and other common proxies don’t go back far enough to calculate how El Niño activity has changed over thousands of years.

Data is especially spotty in the tropical Pacific, says Cobb, who is now a paleoclimatologist at the Georgia Institute of Technology. Kiritimati, and the other islands that make up the Republic of Kiribati, are the heart of El Niño country, where the sea surface temperature and rainfall levels vary most across events. The islands don’t have many climate records from before the 20th century, which makes it difficult to use historical data. But as Cobb’s work is showing, El Niños wrote themselves into the skeletons of the coral that grow in the area.

By drilling tiny samples of coral skeletons from the reef and studying the isotopic composition of the oxygen they contain, Cobb and her team can reconstruct tiny fluctuations in ocean temperature and rainfall. The bigger the coral, the longer the climate record it preserves. Likely candidates for sampling are judged by eye, says Georgia Tech doctoral candidate Pamela Grothe. Corals with lots of holes don’t record data well, as the older parts of their skeletons react differently when exposed to modern seawater. Whole, “pretty” corals are best, Grothe says. 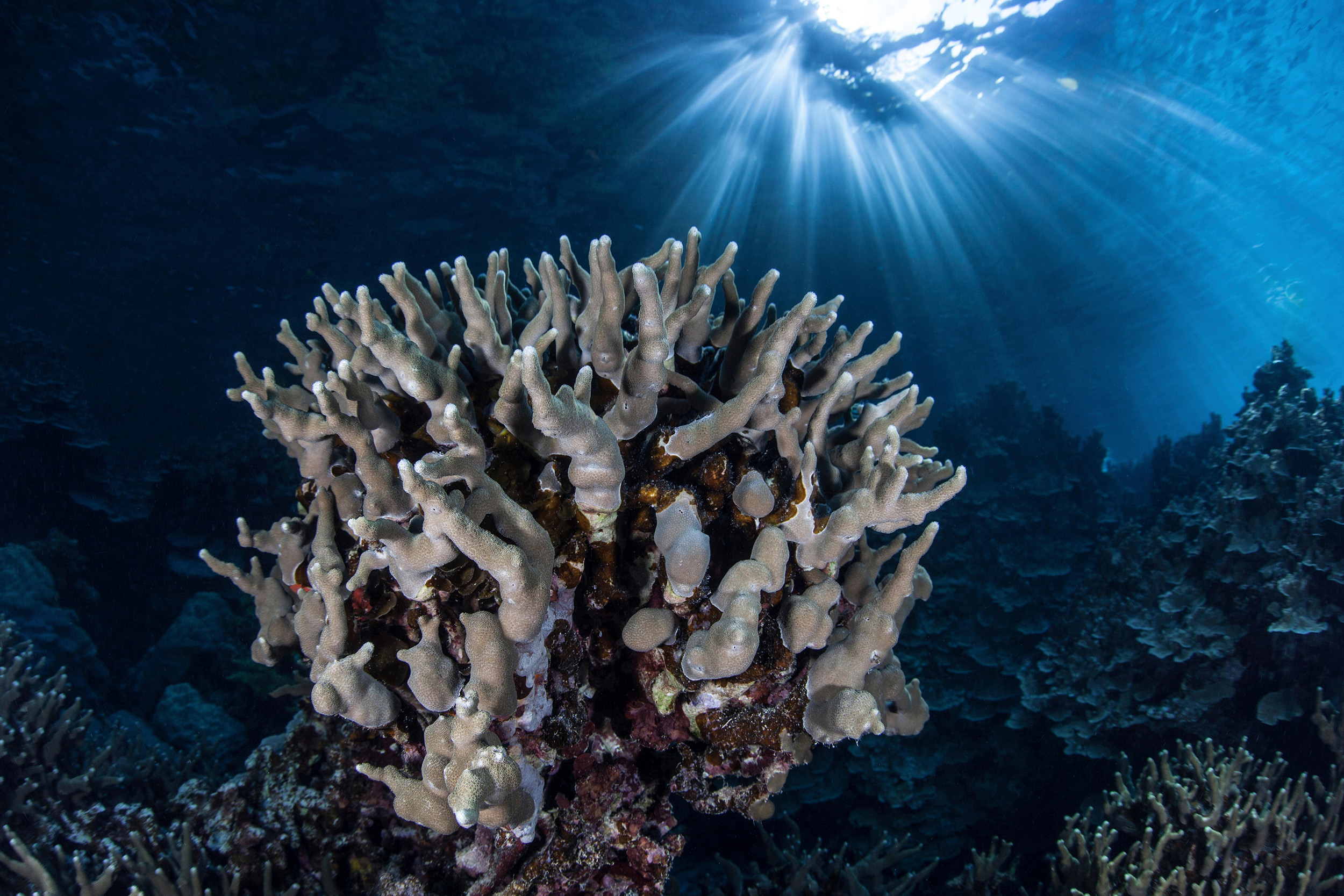 Coral draw on elements from the water to build their skeletons. Changing environmental conditions cause subtle shifts in their chemical compositions, which can be reverse-engineered to create a record of historical temperatures. Photo by WaterFrame/Alamy Stock Photo

As useful as living corals are, Cobb has shown that the data can be pushed back thousands of years by studying fossilized coral skeletons, many of which litter the shorelines of islands across the equatorial Pacific. Torn from their reefs by ancient tsunamis, these fragments document ocean temperatures from hundreds or thousands of years ago. The combination of modern and ancient corals has let Cobb and her team build an index of ocean temperatures going back 7,000 years. It’s a big step in figuring out how historic El Niños affected the ocean.

According to Cobb and Grothe’s preliminary analysis, El Niño events have varied widely in terms of strength and frequency over the past several millennia. But in the 20th century, El Niños began to increase both in intensity and frequency. In fact, El Niños over the past 50 years have been 25 percent stronger on average than they were over the past 7,000 years.

This data fits with the emerging consensus that greenhouse gasses have changed the way El Niño events behave. “This may seem intuitive now, but actually getting evidence of that was obviously a large part of my entire life’s work,” Cobb says. While the exact mechanism for that change still needs to be worked out, Cobb thinks it’s likely that new data will support her conclusion.

Cobb and Grothe are currently working to publish their findings, which they hope will come out later in 2017. In the meantime, their next trip to the blue waters of Kiribati, scheduled for this summer, will be a little more dire: the nation’s reefs suffered badly under the most recent El Niño, and its beaches are at risk of being swallowed by the rising sea. There are more corals to drill and more sensors to set in the warming depths, and likely only a few years before the next El Niño arrives.