There’s an ongoing dispute over how to best preserve marine shipwrecks. Photo by Aquascopic/Alamy Stock Photo

There’s a three-way war being waged over the ancient shipwrecks that dot the ocean floor. On one side, marine archaeologists are rushing to study and preserve these historical sites. On another, treasure hunters and salvagers are staking their claims. Meanwhile, both groups are racing against the clock.

“We’re seeing severe damage to wreck sites,” says marine archaeologist Mike Brennan. “It’s ongoing, and every day that we wait for protection of these sites, trawlers are scraping them apart.”

Fishing fleets are the unwitting third power in this dispute. Archaeologists and treasure hunters have different motives, but fishing trawlers are wreaking havoc, their weighted nets pulling at wrecks and disrupting these sunken treasures.

In preserving maritime history, says Brennan, time is of the essence.

Brennan has seen the devastation trawlers can cause firsthand. During a recent study, he and his colleagues made two surveys of a wreck site off the coast of Turkey. In the 11 months between cruises to visit the Ereğli E, a trading vessel that carried wine, olive oil, and other goods across the Mediterranean, a delivery truck’s worth of artifacts from the fourth century BCE—including ceramic jars and human bones—had been dragged away or dismantled by fishing gear.

In reality, Brennan had anticipated the damage. His study had been designed, in part, to document the damage trawlers can cause, and fuel the case for establishing marine protected areas around ancient wreck sites. 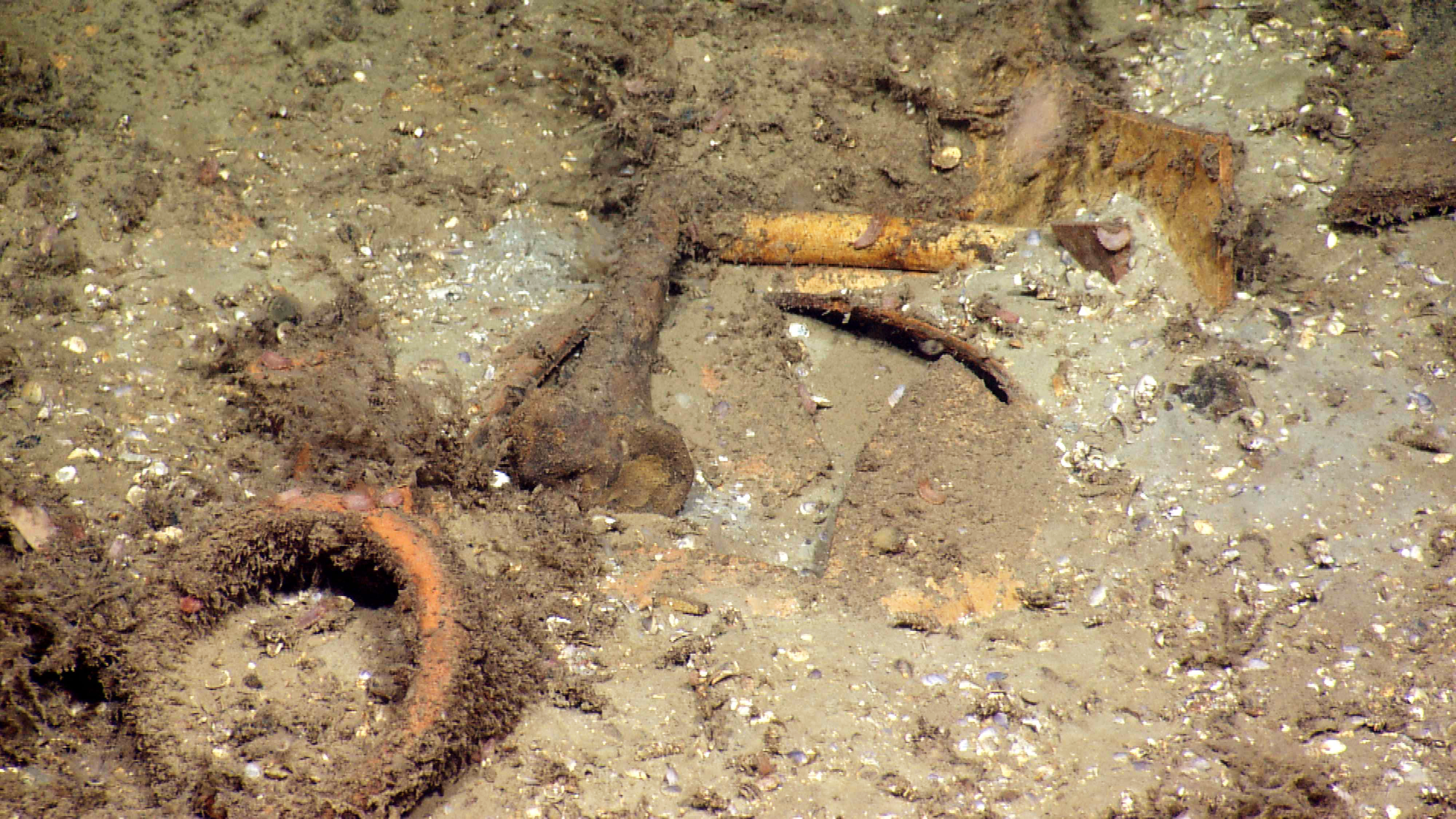 Human bones and other artifacts on the seafloor near the wreck of the Ereğli E. Photo by Ocean Exploration Trust

Brennan, like many marine archaeologists, is of the mind that humanity’s sunken past should stay beneath the waves and off the auction block. And, he says fishing bans around wrecks will thwart excavation by treasure hunters, who often use the threat of trawl damage as an excuse to haul up and sell artifacts.

Sean Kingsley, director of Wreck Watch International, takes issue with the excuse theory, saying it is disingenuous to suggest that the threat of damage through fishing is used to justify commercial exploitation. But he also doesn’t see the viability in trying to preserve all wrecks on the ocean floor.

“Who will pay to enforce the continuous monitoring of endangered sites is hard to imagine,” he says. “And ring-fencing a wreck would need to be a permanent measure, financially and administratively.”

Instead, Kingsley believes excavating wrecks on a selective basis will help prevent bottom fishers from bulldozing what he refers to as “the most important wrecks” found in the deep ocean.

Brennan disagrees with the strategy. “All shipwrecks are culturally significant,” he says. “And who gets to decide which wrecks are not worth enough to be spared? Odyssey [Marine Exploration] has been documenting sites in the English Channel and saying they have to be excavated. We’re trying to show that with the establishment of marine protected areas, they don’t.”

James Delgado, the director of maritime heritage for the National Oceanic and Atmospheric Administration (NOAA), says that any time you take an irreplaceable record of the past and make it a commodity, things are going to get ugly. He sees no end to the debate, but feels management of these cultural resources should be consensual and community-based.

“What you need is a more thoughtful process where you figure things out based on a multitude of interests,” says Delgado.

The idea of protecting wreck sites from fishing trawlers is gaining attention through Brennan’s research, but it has yet to affect policy. Meanwhile, commercial fishers aren’t helping to quell the urgency: they’re trawling deeper and further offshore, putting previously untouched wrecks at risk.

“I don’t have an emotional attachment to wrecks,” admits Mark Leach, a fisher from Cape Cod. “But I am an advocate for keeping them down there, since we know that any place a boat has sunk there’s bound to be more fish. Wrecks are always a positive thing for fish habitat.”

Brennan gets it, but he’s hopeful archaeologists can eventually partner with the fishing industry to slow down the trail of devastation. There are some synergies, he says, that can benefit both sides.

“We’re trying to work with the fishing community to let them know where wrecks are located so they don’t get their expensive gear snagged,” he says. “And, we’re showing them that marine protected areas can ultimately increase the size of local fisheries as fish ‘spill over’ from reserves into fishing areas as adults.”

While the idea of partnering with the commercial fishing industry may be a stretch, it’s a small ray of hope for marine archaeologists. With little chance of burying the hatchet with treasure hunters, they’ll latch on to any alliance they can to save wrecks.

Correction: A previous version of this article implied that Sean Kingsley was a representative of Odyssey Marine Exploration.