A swarm of dead jellyfish washes up on the beach in Israel. Photo by EyeEm Mobile GmbH/Alamy Stock Photo

“Jellyfish Armageddon!” screams a Daily Mail headline—just one of a dizzying number of articles over the past two decades that have prophesized the gelatinous end to the oceans as we know them. Jellies are thriving in our changing oceans, according to these articles, and soon they’ll be taking over. We’re headed for a jellyfish apocalypse, we’re told, where massive blooms shut down power plants, cripple fisheries, and kill unsuspecting beachgoers, and we might already be past the tipping point.

Except, according to Rob Condon, there’s no evidence to support that story. “The doom and gloom thing has been done to death, and it’s incorrect,” he says.

Condon, a plankton ecologist at the University of North Carolina Wilmington, has been studying jellyfish for 15 years. As the manager for the Jellyfish Database Initiative, a database with over 500,000 records on jellyfish distributions, he knows the data on jellyfish ecology better than just about anyone. Simply put, the evidence that jellyfish populations are exploding out of control “doesn’t exist,“ he says.

But if there’s no real support for Jellygeddon, how did the idea become so pervasive?

The idea was first floated in the late 1990s, when Bering Sea jellyfish populations were found to have increased significantly over the previous decade, which seeded the question about global trends. Though a review in 2001 by biologist Claudia Mills noted both increases and decreases, the paper’s open-ended title, “Jellyfish blooms: are populations increasing globally in response to changing ocean conditions?” created a foundation for misinterpretation. Over the next several years, Condon says, the idea spread, first through the scientific literature, and later through the media. 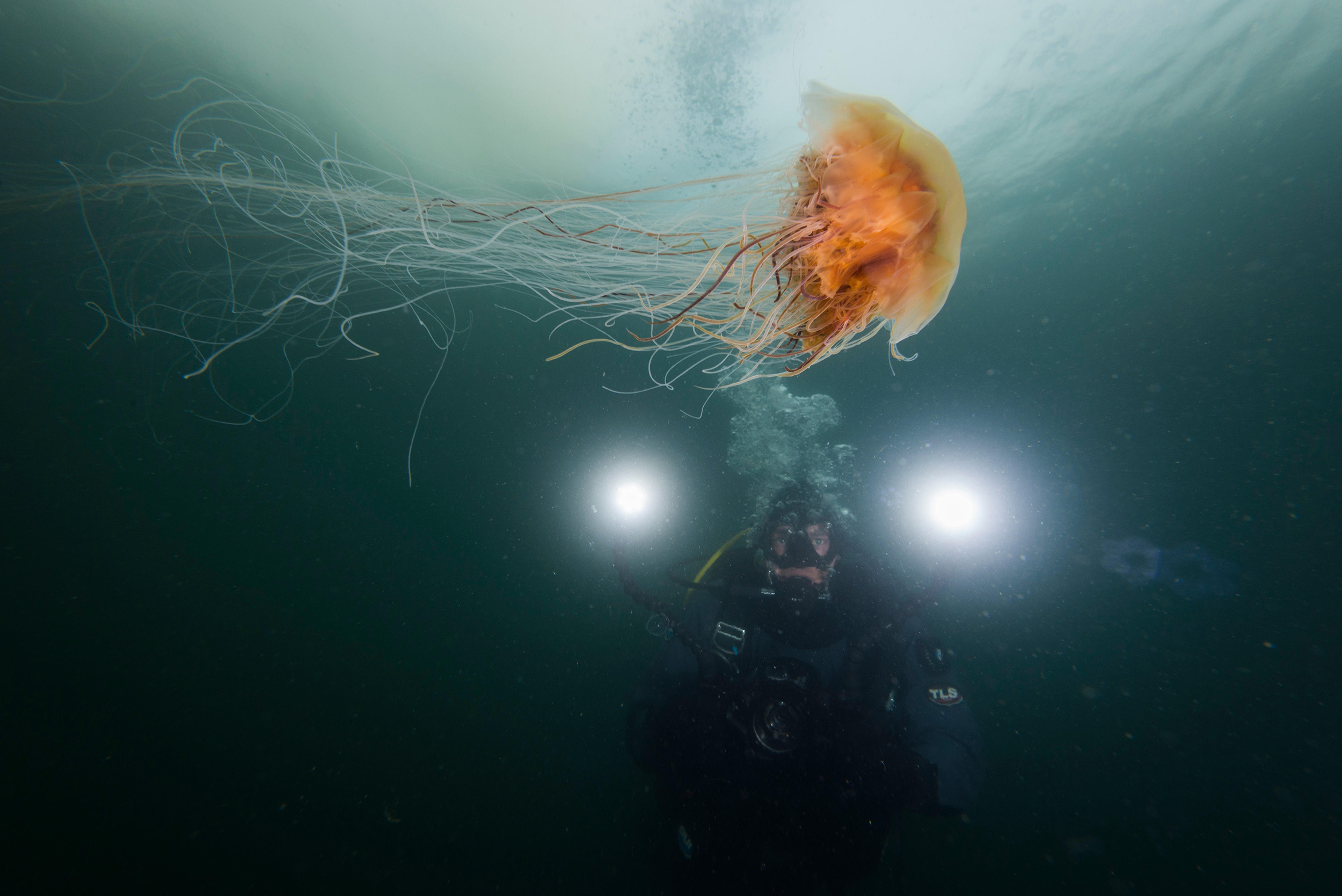 A diver swims alongside a lion’s mane jellyfish in Alaska. Photo by Justin Hofman/Alamy Stock Photo

In a new paper, Condon and his colleagues have reconstructed exactly how this unsupported idea gained ground.

The researchers combed through every paper on jellyfish ecology published between 1987 and 2012—all 255 of them—looking for any statements about jellyfish population trends, and tracking which papers were cited as support. They also categorized each paper’s results and conclusions and checked to see if the statements matched the sources cited.

Their results were sobering. Nearly half of the papers misinterpreted the studies they cited. According to Condon, one in two papers contained statements about trends in jellyfish that are not supported by the references. In several cases, the original papers contained equivocal messages that were lost in citation.

The scientific record has become like a game of telephone, says Condon, where each new paper cites the one before, losing some of the nuance and complexity each time.

Condon says there are many reasons why these misinterpretations occur, but perhaps the most immediate is the pressure to perform. “The pace of science has quickened,” he says. “As a result, things fall through the cracks.”

The results are interesting and worrying, though perhaps not surprising, says James Guest, an ecologist at the Hawai‘i Institute of Marine Biology. He and some of his colleagues found similar problems with poor citation practices when they examined marine biology papers more generally. Though he suspects that the problem is science-wide.

“One of the problems is that academics are being pressured to publish more and more and in higher impact journals to be competitive. I suspect that this leads to a sacrifice in quality of science,” says Guest. “Often it is just a case of people not bothering to go back to the original papers and checking them thoroughly to see if the statement they are making is actually supported.”

“We need to be a bit more rigorous,” says Condon. (“And I’m including myself in this. … I have a paper there with a mis-citation, so I’m not pointing fingers,” he says.)

As for the jellies, “we’re not saying they’re not increasing,” explains Condon, “we just need more data to make that conclusion.”

Jellyfish populations rise and fall in long, multidecadal cycles that scientists have only begun to monitor. Right now, jellyfish populations are on the decline following a peak in the mid-2000s. The dramatic ups and downs in jelly populations make it difficult to determine if the baseline is really changing.

After monitoring for one and a half cycles, there seems to be a slight positive trend overall, but more data are needed to see if that continues. And even if it does, the numbers will hardly be apocalyptic.

The boom and bust nature of these animals’ existence also helps explain why so many were sure they were growing unchecked: “If you actually look at when people started thinking that jellies are increasing globally,” says Condon, “it occurred during the rising phase of the cycle.”