This bald eagle nest was built in part from hardy strands of the kelp, Pterygophora californica. Photo by Erin Rechsteiner/Hakai Institute

Biologist Erin Rechsteiner braved the waters of Queens Sound in a small aluminum boat heading for Gosling Rocks, a remote archipelago on British Columbia’s central coast. It was February 2015 and she had come to study sea otters, a top marine predator in the region. But when she arrived, something else caught her attention—a bald eagle nest on top of a wind-stunted spruce about 2.5 meters high.

Bald eagles are territorial breeders. Once they find a good nesting location they rarely let it go. In fact, this particular nest had been noted in the 1990s, but back then it was made entirely of wood. Now, it was constructed mostly from dried pieces of kelp apparently scavenged from the shore.

“As far as we know, this has never been observed before,” says Rechsteiner, who studies sea otters as a doctoral candidate at the Hakai Institute* and the University of Victoria.

The discovery of an eagle nest made out of kelp, she says, is just the latest example of how sea otters—which are rebounding from a local extinction along the BC coast—are influencing life in the sea, on the land, and beyond.

Reintroduced to British Columbia beginning around 1970, sea otters have now resettled and expanded into much of their historic range. While they were absent, sea urchins—the otter’s food of choice—devoured and eliminated much of the region’s kelp forests. With the sea otter’s return, kelp, and the myriad life it supports, is back as well.

The effect of this sea otter renaissance has been dramatic. In the rejuvenated kelp forests, rockfish, kelp greenling, and many other sea animals are thriving. Washed ashore, kelp provides hiding places for small coastal creatures and is a source of fertilizing nitrogen. In contrast, Rechsteiner says, coastal waters without otters are little more than sea urchin barrens.

In places where there are few trees, such as Gosling Rocks, it appears that kelp also supports eagles. Before the sea otters spurred the growth of kelp forests, Rechsteiner says, the Gosling Rock eagles would have had to make repeated trips to islands an energy-sapping three kilometers away—the closest source of abundant wood. 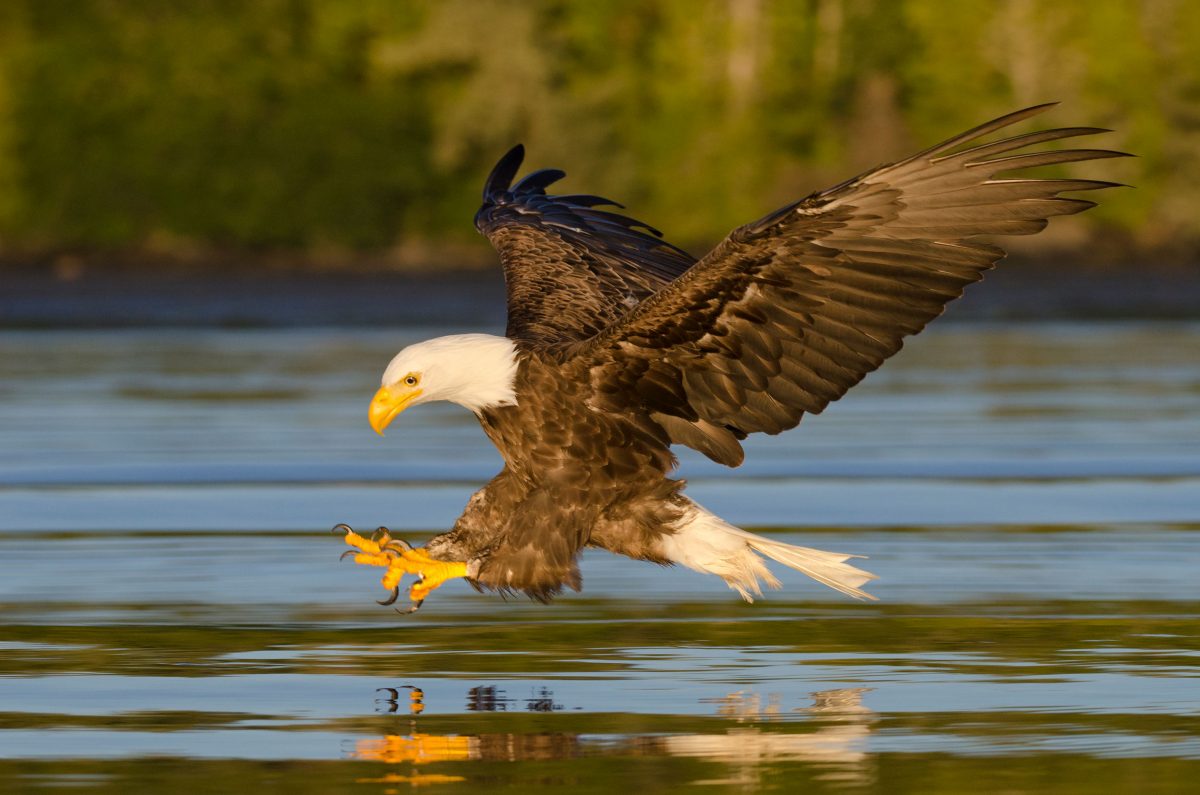 The discovery adds another strand to the intricate web connecting bald eagles and sea otters. Photo by Bertie Gregory/Minden Pictures

Access to a novel construction material is just one way bald eagles benefit from the sea otter’s return. For the eagles, sea otter pups are an important source of food, as are the fish attracted to the kelp forests. This is reducing the pressure on seabirds, the eagles’ other food of choice.

Though only one kelp-built eagle nest has been discovered, it expands scientists’ understanding of how ecological communities are interconnected, says Rechsteiner. “What’s really cool is this very clear linkage between the top predator in the marine [environment] and a phenomenon we’re seeing on land.”

James Estes, a marine biologist at the University of California, Santa Cruz, and an authority on sea otters and their effects on wider ecosystems, echoes this sentiment.

* Erin Rechsteiner’s research is funded by the Tula Foundation, which also funds Hakai Magazine and the Hakai Institute. The magazine is editorially independent of the institute and foundation.