In Northern California, purple sea urchins are decimating kelp forests. Though the species of urchin causing problems may vary by region, the damage is the same. Photo by Norbert Wu/Minden Pictures

B-movie screenwriters could hardly have produced a campier story: the world turns to dust as an army of tiny, pincushion-like invaders ever so slowly takes over. They devour whatever lies in their path, then live on for decades without eating. The ecosystem collapses, and while humanity despairs, a few bright scientists hatch a plan to save the day.

But fact can be as strange as science fiction and this zany plot is unfolding around the world as sea urchins proliferate. In places such as Tasmania, Japan, Norway, Canada, and California, urchins are mowing down seaweed, including giant kelp. In the bleak, sometimes almost lifeless environments that result, the seafloor is carpeted with urchins. And though they prefer seaweed, urchins will resort to gnawing on the coralline algae that encrusts many underwater rocks, emptying abalone shells, and even cannibalizing one another if there is nothing better to eat.

These urchin barrens can last for decades. Off Hokkaido, Japan, barrens have persisted for 80 years and counting. In Alaska’s Aleutian Islands, they’ve lasted for more than 25. Unless disrupted by a powerful environmental disturbance, like a disease outbreak or the appearance of a predator, urchin barrens will not shift back to a kelp-dominated system.

Off California, where the concentration of purple urchins has increased 60 to 100 times since their takeover began around 2014, local divers, ecologists, and entrepreneurs are hoping to avert such a grim future. Their plan is to develop a new fishery for the overpopulated urchins, which number in the tens of millions, turning a scourge into an opportunity while creating clearings in the urchin barrens where kelp may have a chance to regrow.

Sea urchins—or more specifically, their gonads, which are marketed as uni—are a valued delicacy. But the urchins living in barren environments have little to eat so their insides, including their prized golden gonads, are shriveled and commercially worthless. Historically, commercial urchin divers in the northeast Pacific have overlooked purple urchins because of their small size, preferring the much larger red urchins. But even red urchins have been starved to commercial worthlessness by the scourge of purple urchins, bringing the once lucrative fishery to a standstill.

A small Norwegian company called Urchinomics, however, has a plan to restore the lost kelp forests and give urchin divers back their livelihoods. Their venture involves gathering large numbers of purple urchins from overrun areas, fattening them up in tanks, and then selling them to restaurants. They call this process urchin ranching.

Urchinomics, which launched several years ago, is currently piloting a small-scale ranching operation in Japan, and has research facilities in Norway and on both coasts of Canada. Now they’re running laboratory trials with scientists in California.

At San Diego State University, Renee Angwin, manager of the school’s Coastal and Marine Institute Laboratory, is helping rear urchins taken from the barrens. She feeds them dried seaweed pellets and watches as the animals rapidly rebound from a starvation state to marketable condition. According to Angwin, it takes about two months for shrunken and worthless gonads to swell into fat, pinky-sized uni slabs.

“We’re letting nature do all the work—nature’s growing it to market size and then we’re just enhancing what nature’s already done,” Angwin says.

Denise MacDonald, Urchinomics’s director of global marketing, says the business’s plan is to create a local specialty dining market for purple urchin uni, modeled after the oyster bar. She describes an experience where “the shucker will open the urchin, clean it out, and you get your urchin with the roe inside,” ripe and ready for a drizzle of lime juice or soy sauce. Uni is a richly flavored food and MacDonald says that three purple urchins are likely plenty for a table of five people. 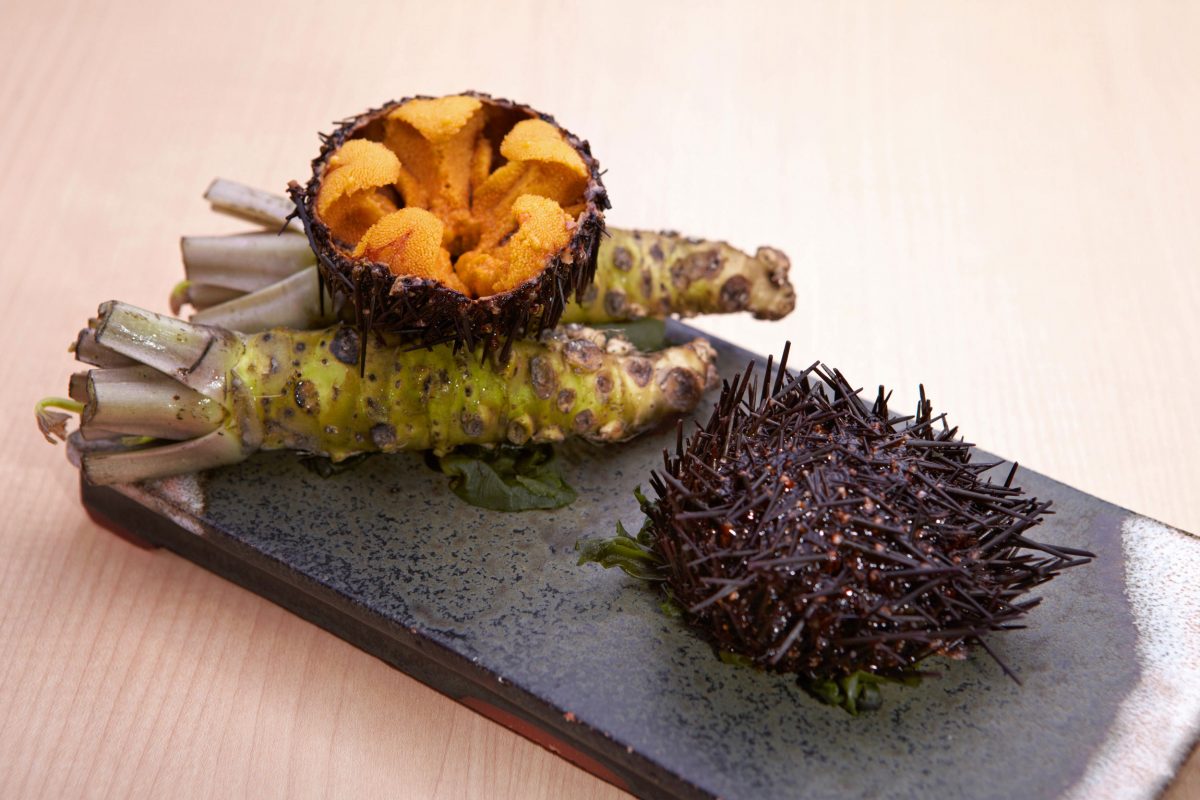 Known as uni, urchin gonads are a delicacy. Photo by Bamboofox/Alamy Stock Photo

Because eating uni is a high-end foodie experience, the market for urchin will be small. It’s hard to picture the finicky pace of gourmet dining undoing the creatures’ environmental takeover.

“I can’t imagine this program fully restoring the miles and miles of urchin barren along the North Coast [of California] right now,” says Kyle Cavanaugh, a geographer at the University of California, Santa Barbara.

After all, urchin barrens are tenaciously persistent. Sea urchins can live for decades without solid food, and the blighted underwater landscapes they create are just as long-lasting.

“Urchins can persist in this starvation state for a very long time,” Cavanaugh says.

Craig Johnson, who studies urchin barrens at the University of Tasmania in Australia, is marginally optimistic about Urchinomics’s plan. He believes there is sufficient demand for uni—mainly in Japan—to support a purple urchin ranching industry. In fact, providing enough uni to sate the market is a continuous problem, he says. Given that many wild urchin fisheries have been depleted, it makes the California purple urchins a potentially valuable new resource.

But to restore kelp forests, Urchinomics’s efforts must be aggressive and thorough.

The problem, says Johnson, is that while converting a thriving kelp forest into an urchin barren requires a huge incursion of urchins, it only takes a relatively small number of urchins to maintain that barren in perpetuity. That means urchins must be almost entirely eradicated in order to shift a barren back to a healthy, kelp-filled state.

“The key thing,” says Johnson by email, “is that they’ll need to remove around 90 percent (and possibly more) of the urchins to see kelp recovery.”

For now, it remains to be seen if divers can harvest urchins so efficiently and thoroughly that they can help restore kelp beds while still turning a profit.

“It might not be economically viable to mop up those last animals,” he adds.