This spring, temperatures in Alaska and northern Canada have been significantly higher than usual. (Red indicates areas warmer than average while blue indicates colder than average. The darker the red, or blue, the greater the deviation from average.) Image by NASA Earth Observatory

Alaska in March is supposed to be cold. Along the north and west coasts, the ocean should be frozen farther than the eye can see. In the state’s interior, rivers should be locked in ice so thick that they double as roads for snowmobiles and trucks. And where I live, near Anchorage in south-central Alaska, the snowpack should be deep enough to support skiing for weeks to come. But this year, a record-breaking heatwave upended norms and had us basking in comfortable—but often unsettling—warmth.

Across Alaska, March temperatures averaged 11 °C above normal. The deviation was most extreme in the Arctic where, on March 30, thermometers rose almost 22 °C above normal—to 3 °C. That still sounds cold, but it was comparatively hot.

“It’s hard to characterize that anomaly, it’s just pretty darn remarkable for that part of the world,” says Rick Thoman, a climate specialist with the Alaska Center for Climate Assessment and Policy in Fairbanks. The state’s wave of warmth was part of a weeks-long weather pattern that shattered temperature records across our immense state, contributing to losses of both property and life. “When you have a slow grind of warming like that, lasting weeks or months, it affects people’s lives,” Thoman says.

On April 15, three people, including an 11-year-old girl, died after their snowmobiles plunged through thin ice on the Noatak River in far northwestern Alaska. Earlier in the winter, 700 kilometers south, on the lower Kuskokwim River, at least five people perished in separate incidents when their snowmobiles or four-wheelers broke through thin ice. There were close calls too, including the rescue of three miners who spent hours hopping between disintegrating ice floes in the Bering Sea near Nome. Farther south, people skating on the popular Portage Lake near Anchorage also fell through thin ice. Varying factors contributed to these and other mishaps, but abnormally thin ice was a common denominator.

In Alaska, ice is infrastructure. For example, the Kuskokwim River, which runs over 1,100 kilometers across southwestern Alaska, freezes so solid that it becomes a marked ice road connecting dozens of communities spread over 300 kilometers. In sparsely populated interior Alaska, frozen rivers are indispensable for transporting goods, visiting family, and delivering kids to school basketball games.

Along Alaska’s west coast, the frozen waters of the Bering Sea also act as infrastructure. Each winter, frigid air transforms much of the Bering between Russia and Alaska into sea ice. As it fastens to shore, the ice provides platforms for fishing and hunting, and safe routes between communities. It also prevents wave action and storm surges from eroding the shores of coastal villages.

The steady decline of sea ice is old news, but 2019 brought exceptional conditions. In January, a series of warm storms began breaking apart the ice, which had formed late and was thinner than usual. By late March, the Bering Sea was largely open, at a time when the ice usually reaches its maximum for the year, which historically has been as much as 900,000 square kilometers (more than twice the size of the province of Alberta). In April, US federal scientists reported coverage was even lower than the unprecedented low extent of 2018. By mid-May, ice that should have persisted into June was almost entirely gone. 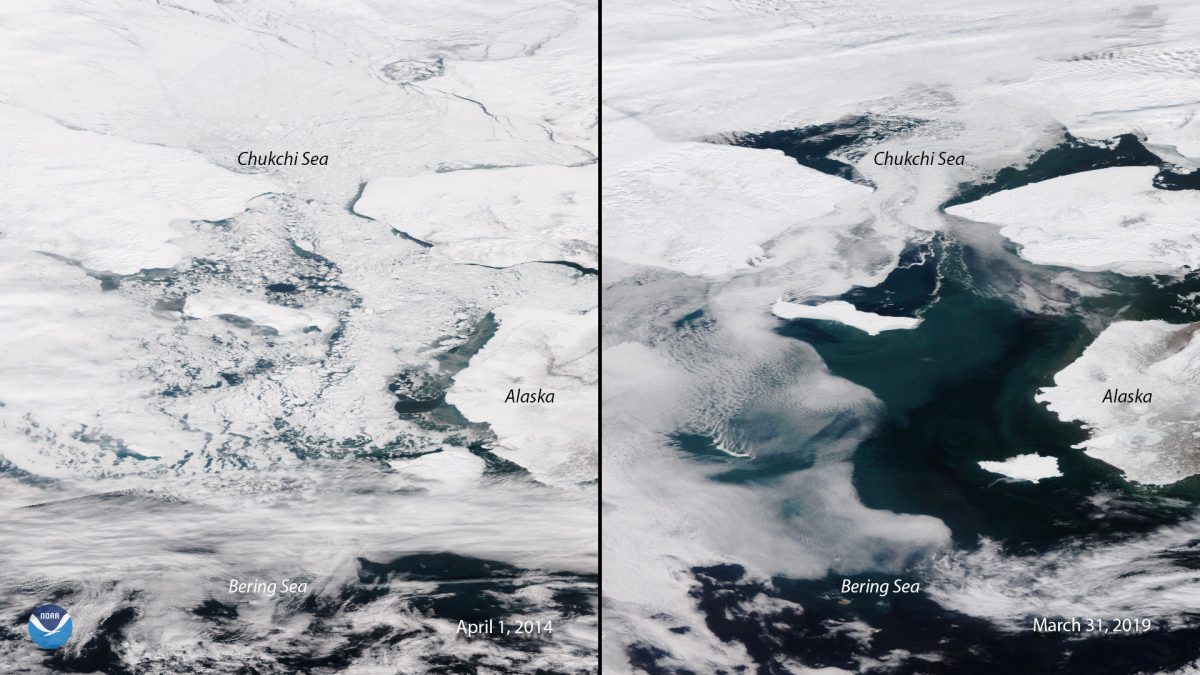 In March 2019, the Bering Sea had much less ice than usual. Photos by the US National Oceanic and Atmospheric Administration

Declining sea ice and melting permafrost are having devastating impacts on Alaskan villages. Since 2003, the United States Government Accountability Office has identified at least 31 communities at risk, with erosion imperiling homes, roads, and drinking water sources. Three villages—Kivalina, Newtok, and Shishmaref—must relocate soon or cease to exist, a traumatic reality brought into sharper focus by the warm 2019 winter.

In an added hardship, disappearing ice cuts off access to hunting and fishing routes, and the warming ocean is changing where fish and marine mammals can be found. This has real nutritional consequences in a land where many residents still rely on subsistence hunting and fishing. Commercial crab, cod, and pollock fleets also wrestle with the changes.

Beyond the immediate impacts on people and infrastructure, less ice in the Bering and in the neighboring Chukchi Sea to the north have far-reaching atmospheric effects in Alaska. As Thoman explains, the massive area of newly open water creates warmer air temperatures and provides more moisture to storms. It can increase coastal erosion and winter rain or even produce heavier snow far inland. Researchers are also investigating whether disappearing sea ice is affecting continental weather patterns.

Meanwhile, hundreds of kilometers south of the Bering, the balmy winter contributed to above-average sea surface temperatures in the Gulf of Alaska. Scientists say the gulf is certain to warm further during the upcoming summer. For many, including Rob Campbell, a biological oceanographer with the Prince William Sound Science Center, it stirs unpleasant memories of the Blob, an enormous patch of warm water that formed in the Gulf of Alaska in 2013. It lasted over two years and upset ecological norms across our region.

“Today we don’t see as much heat in the gulf as we had beginning in 2013,” says Campbell. “But in general, the northern gulf is 1.5 °C above average. It’s a big anomaly heading into summer.”

Campbell finds the conditions worrisome. “Continued warmth like this has cascading effects,” he says. “And we may not understand the consequences for species like salmon for years to come.”

As spring rolls into summer, temperatures have moderated somewhat, but above-average warmth still dominates across much of Alaska. It’s especially true in the Arctic, where May temperatures at some locations have been higher than normal nearly every day, sometimes by as much as 10 °C. As a result, sea ice and snowpacks are at record lows. To scientists, village elders, and others, it is the latest indication of the transformational changes accelerating across the north.