New Zealand’s experiments in fenced nature preserves have paid off. Photo by Kathrin and Stefan Marks

With few exceptions, New Zealand has been free of land mammals since it broke away from Australia and Antarctica 80 million years ago. In their place, a unique ecosystem arose, with distinctive flightless birds, large insects, and primitive reptiles and amphibians evolving to fit the niches so often occupied by mammals.

But this experiment in evolution came to an abrupt end when the first humans sailed to the pristine archipelago about 750 years ago, bringing dogs and rats with them. European settlers later added livestock, fur trade animals, and stowaway rodents, which are now all tangled into New Zealand’s ecology.

Consequently, a large swath of New Zealand’s native species has fallen to predation, competition, and hunting. And no group has felt it more than the birds. So far, 59 New Zealand bird species that we know of have gone extinct. Of the 180 native bird species that have survived, 73 are considered threatened.

Many of these threatened birds have been successfully reintroduced and re-established on some of New Zealand’s smaller islands, where it is possible to remove all of the invasive mammals. But on the nation’s main North and South Islands, mammalian pests and predators are not so easily extracted. The only places on the mainland that have a semblance of New Zealand’s prehuman ecology are fenced nature preserves—protected spaces surrounded by fencing designed to prevent mammals from entering.

The Orokonui Ecosanctuary, on the eastern coast of the South Island, is one of these preserves. With 307 hectares of mountain cloud forest enclosed by 8.7 kilometers of two-meter-tall fencing, it is a small island of conservation on a larger island of ecological threats.

While some see fenced preserves like Orokonui as necessary anchor points of conservation, critics suggest they are akin to expensive zoos, and conservation funds could be more wisely invested elsewhere.

But now, an eight-year study conducted at Orokonui on the broader impacts of fenced nature preserves has addressed this debate in a way no other study has. The results, published earlier this year, show that the benefits of protecting species inside the preserve spill out into the wider New Zealand ecosystem.

Starting in 2005, the scientists surveyed the populations of several species of fruit trees both inside and outside the Orokonui Ecosanctuary, prior to its enclosure in July 2007.

After the fence was built, Orokonui staff, contractors, and volunteers worked to eradicate rodents and other mammals inside the enclosure. Several rare native species were then reintroduced, including the lizard-like tuatara, and birds such as the Haast kiwi, the takahē, and the kaka parrot. 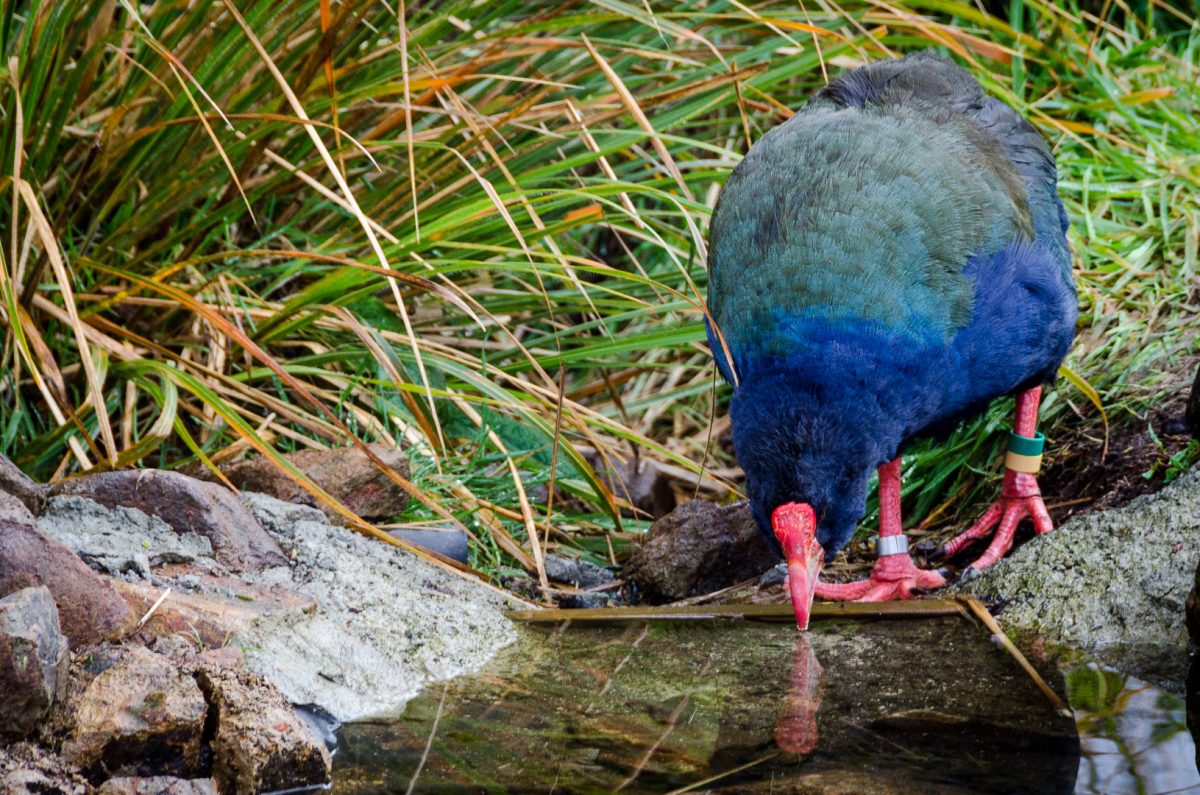 One of the species that is now seeing relief from mammalian predators is the flightless takahē. Photo by Kathrin and Stefan Marks

After eight years, the researchers repeated their count of the fruit trees. They also counted the number of fruit-eating birds of flight on both sides of the fence.

“The patterns are very suggestive that fruit-eating birds are dispersing seeds not only in the reserve, but also in its immediate vicinity,” explains A. J. Tanentzap, who led the study, and is an ecologist at the University of Cambridge in the United Kingdom. “This pattern is what we mean by a spillover from the reserve,” he says. It “suggests that the reserve is influencing a much wider area than that which is simply enclosed by its fence.”

Tanentzap wrote on his blog that it’s a consequence of something called the halo effect. It’s “sort of like if you have too many people living in a city,” he wrote. “At a certain stage, you’ll get a steady stream of people fleeing the overcrowding and moving into the suburbs.”

According to Elton Smith, the conservation manager at the Orokonui Ecosanctuary, the study offers strong support for the operation. “If anything, it helps justify the existence of the sanctuary.”

By 2050, the New Zealand government hopes to eradicate land mammals from mainland New Zealand. As it progresses toward that goal, it is easy to see how fenced nature preserves like Orokonui may play a role in re-establishing the native ecosystem.