Spotted eagle rays, with their graceful swimming and strikingly speckled backs, are among the most photogenic fish in the Caribbean. The rays are an inky black, flecked with vibrant white spots. And as new research shows, these spectacular patterns are more than just beautiful—they’re unique.

In a study, scientists led by Maria del Socorro González-Ramos, a doctoral candidate at Mexico’s Instituto Politécnico Nacional, analyzed images of 192 individual spotted eagle rays from the Chacahua Lagoon in Oaxaca, Mexico, which may be a nursery area for this species.

To keep track of ray identities, researchers fastened a unique tag to each fish. Then Socorro González-Ramos and her colleagues used photo identification software to calculate how reliably a ray’s spots could be used to identify it. They found they could accurately ID a ray from a photo of its spots 88.2 percent of the time. 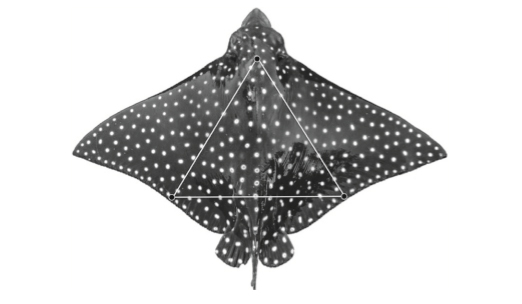 The region of a spotted eagle ray’s color pattern with the most reliable rate of individual identification. Photo by González-Ramos et al. 2016

Simon Pierce, a marine biologist with the Marine Megafauna Foundation, who was not involved in this study, says that while this study was performed carefully and correctly, photo identification is a fickle technique. For instance, it is important to make sure that individuals do indeed have unique markings, and that those markings are stable over time.

If the technique is used improperly, you may believe that one individual appearing multiple times is multiple individual animals. “That could inflate estimates of population size and lead to individuals appearing more transient than they really are, and that’s bad news for management and conservation,” says Pierce. “You could think that there are more animals left than there really are, or that they are less likely to be impacted by local human activities than is really the case.”

“Anyone with a camera—scientists or non-scientist—can help with population monitoring in these species,” says Pierce.

Now that photo identification has been validated for spotted eagle rays, Socorro González-Ramos and her team are optimistic that they can use it to gather more data on the populations of these beautiful animals, which are often caught as fisheries by-catch in Mexico.

“The spotted eagle ray population at Chacahua Lagoon still has many things to show us about the biology, reproduction, and demography of this species,” says Socorro González-Ramos. Despite promising results so far, “so many things remain unknown.”