A long exposure photograph shows off the bioluminescence of Anomalops katoptron, a species of flashlight fish. Photo by Jens Hellinger

Go for a dive in the Indo-Pacific at night, and you may see what look like little blue fairies flitting about in the dark. But there’s nothing supernatural afoot—only a quirk of biology. That neon-blue glow belongs to splitfin flashlight fish and their built-in headlamps.

Bioluminescence is a common enough thing in nature. Fireflies flash their bottoms to attract mates, ninja lanternsharks create a soft glow from their skin so predators can’t see them from below, and anglerfish lure in tasty treats with a bioluminescent bulb sprouting from their foreheads. But the splitfin flashlight fish wields bioluminescence differently.

In a new study, researchers led by Jens Hellinger, a zoologist at Ruhr-University Bochum in Germany, show how this fish uses its bioluminescence to spot prey in the dark. 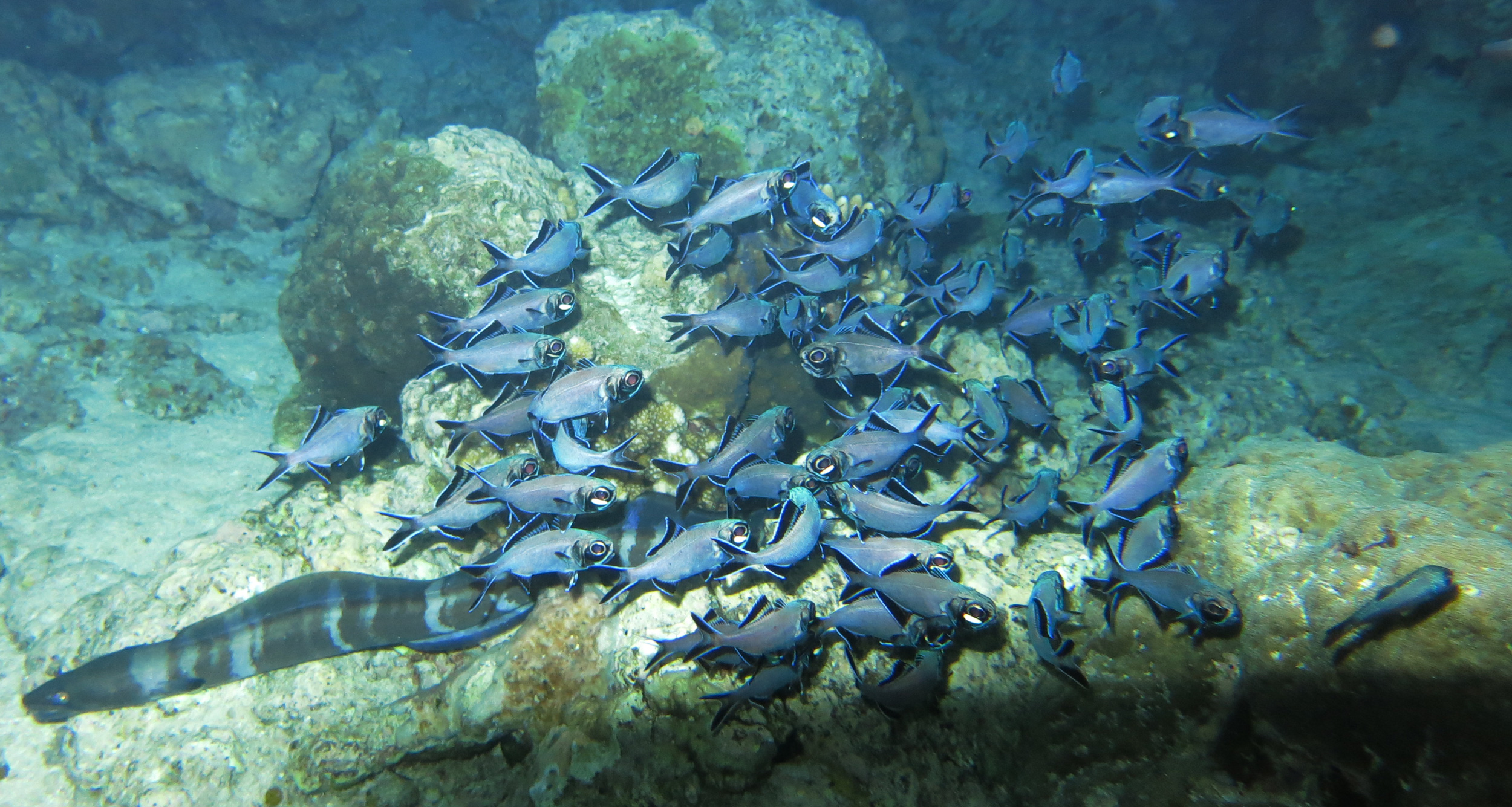 Flashlight fish swimming off Indonesia’s Banda Islands are caught in the light of a different flashlight. Photo by Jens Hellinger

Splitfin flashlight fish have one bean-shaped cavity under each eye, making them look like football players sporting eye black. And those cavities house light-producing bacteria. The backsides of these cavities are covered in guanine crystal reflectors—the same structures that make fish scales shimmer—which amplify the light produced by the fish’s symbionts.

A fish that swims around at night with two blue flashlights on its face might seem like easy pickings for a predator, but the splitfins have evolved the ability to close their light organs. The species featured in the new study, Anomalops katoptron, can rotate its organ backward, sort of like that eye-roll you do when your mom says you’re the most handsome science writer in the world. But not all flashlight fish turn out the lights the same way.

No matter what method the fish use to turn the light on and off, watching them for even a short time makes it clear that not only can they do so, but they choose to do so frequently. Swimming among a school of flashlight fish at night is like going to a rave on Bring Your Own Glow Stick Night. But until Hellinger’s study, scientists had only been able to guess what that flashing was about.

Using a captive population of splitfin flashlight fish in a coral reef tank, Hellinger and his colleagues measured how often the fish clicked their lights under certain conditions. During the day, for example, their flashlights flicked on just nine times each minute. But at night, when they would most need the help of their portable illumination, that pulse shot up to 90 blinks a minute. Most importantly, when the researchers offered food in the form of defrosted zooplankton, which are basically like cocktail shrimp to a flashlight fish, they stopped blinking and let their little lights shine, illuminating their meal.

Of course, the authors note that their experiments were conducted in a lab, and that they will have to confirm the results in the wild. Hellinger says he also hopes to test what kind of trade-off the fish experience between seeing prey and being seen by a predator. And it’s entirely possible that the flashlight fish’s beams serve more than one purpose.

But you don’t really expect the splitfin to go from mysterious blue ocean wisp to completely understood creature all in one study, do you?