A young Haitian girl receives an intravenous drip at a cholera clinic in Port-au-Prince on January 10, 2011. Jorge Silva/Reuters/Corbis

For its entire known history, the small island state of Haiti had never seen a single case of cholera. In 2010, that all changed.

On Tuesday, January 12, 2010 at 4:53 p.m., a magnitude 7.0 earthquake struck just outside the Haitian capital of Port-au-Prince. The quake killed 230,000 people and displaced two million more. In the wake of the disaster, aid—and aid workers—flowed into Haiti. And they brought cholera—and the diarrhea, vomiting, and deadly dehydration it causes—with them.

Only nine months after the quake, the first cholera outbreak struck Haiti. Now, five years on, leading epidemiologist Afsar Ali worries that cholera is becoming endemic—that the various cholera strains are establishing themselves in environmental reservoirs that will make them difficult, if not impossible, to eradicate.

The very first time Ali visited Haiti was in August 2010. An expert epidemiologist who has spent much of his life studying cholera in Bangladesh, Ali was brought in to assess the country’s risk of diarrhoeal pathogenic organisms.

“The situation was so bad—with people moving in and out, internal displacement, a lot of people coming from other countries, poor public health infrastructure … that when I came back, I said that it is only a matter of time before cholera hits,” Ali says. 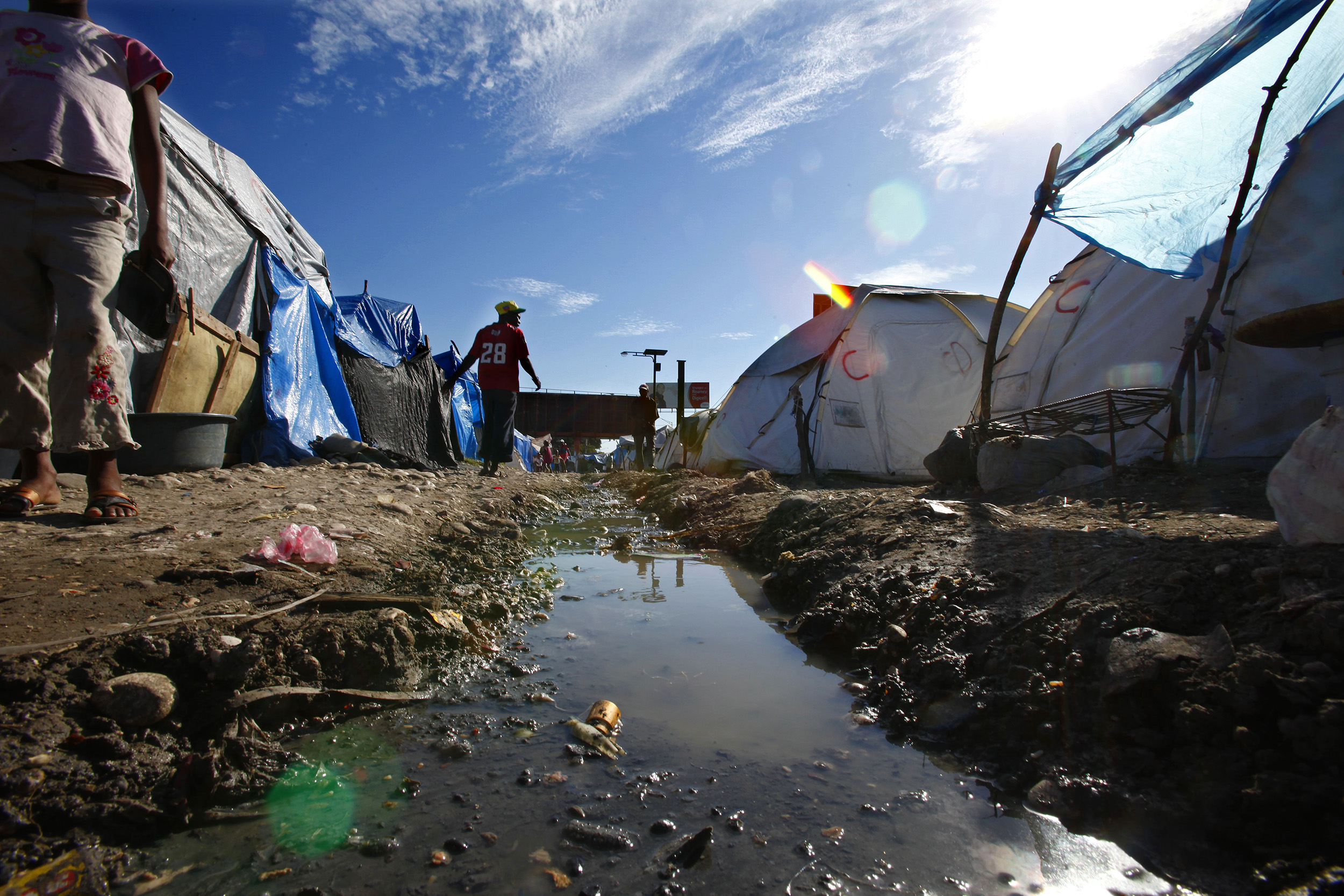 Dirty, potentially contaminated water stagnates in a drainage ditch in one of the refuge tent cities set up in the wake of the earthquake. Photo by Brian Blanco/ZUMA Press/Corbis

Cholera spreads through contaminated water, and even before the earthquake Haiti’s water and sanitation infrastructure wasn’t in good shape. Two months after the epidemiologist’s arrival, the Haitian government reported the spread of Vibrio cholerae O1. The start of the cholera epidemic was explosive. Within the first month, 303 people died and thousands fell ill. Within three years, 8,231 had died and hundreds of thousands were hospitalized. The disease has since spread to neighboring countries, including the Dominican Republic and Cuba.

By 2013 and 2014, the number of cholera cases in Haiti finally started to drop. The declining caseload was a cause for optimism; yet Ali still doesn’t think the country is in the clear, noting the threat of complacency—a position echoed by many of the aid organizations working in the region.

Ali’s stance stems from more than just the precautionary principle—his worry is based on a new understanding of how cholera is transmitted. 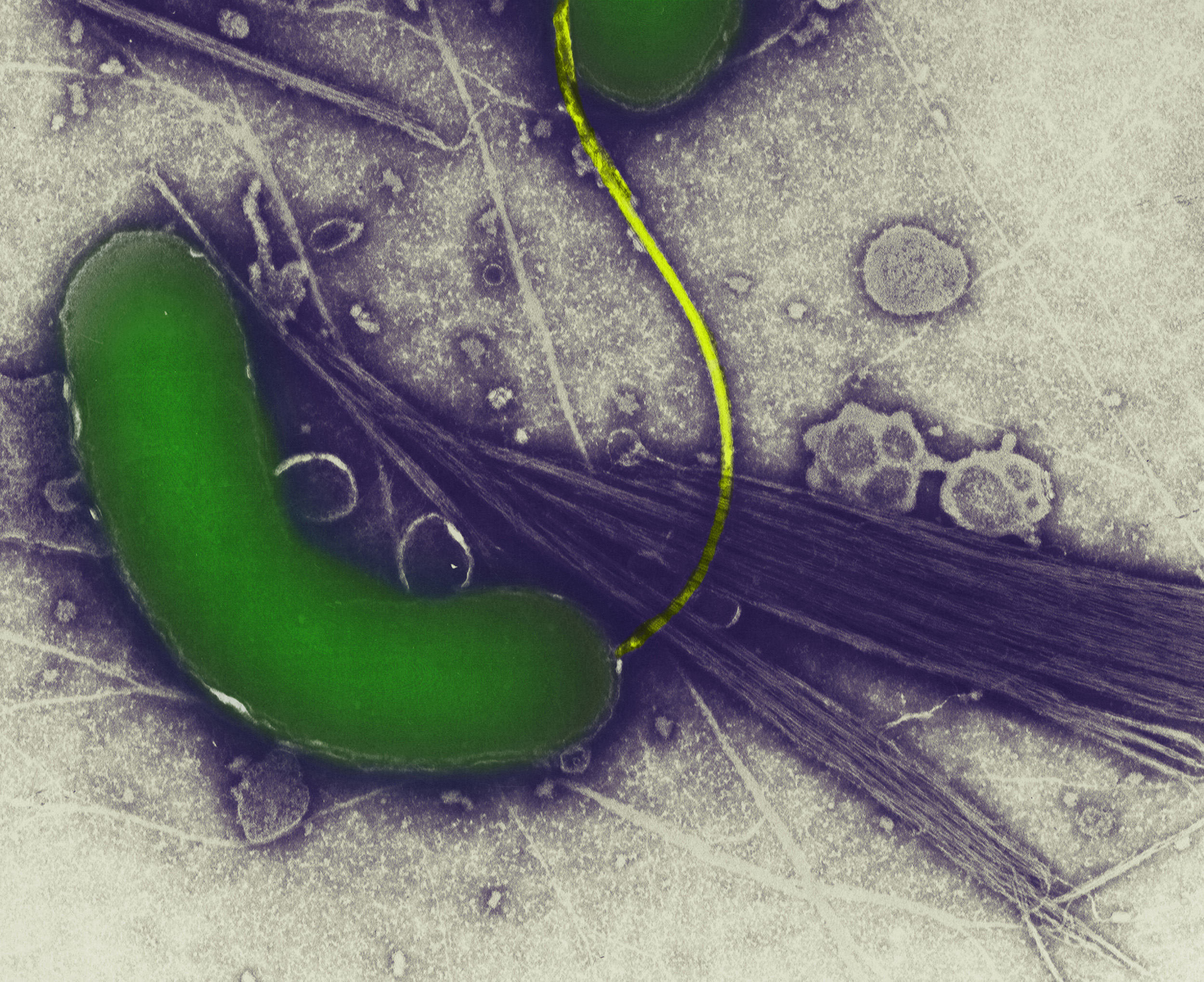 The bacterium that causes cholera, Vibrio cholerae, can sometimes form a biofilm, making it resistant to decontamination. Photo by Callista Images/cultura/Corbis

There are two schools of thought on how cholera spreads: the standard view, that transmission is predominately human-to-human, through fecal-contaminated water. And another view, one that is gaining weight as evidence accumulates: that cholera can persist in the environment, independent of human contamination.

Rita Colwell, a much-lauded environmental microbiologist, has done much of the work to develop this idea. Colwell has found microorganisms thriving around the world. She’s found cholera in oceans, isolated lakes, and rivers untouched by fecal contamination. Colwell has also found cholera in Haitian waters. Ali’s research fits in with the second view. Using Haiti as a case study, Ali is asking: can cholera exist without human–to-human transmission?

Between Gressier and Leogane, two communities dissected by the Momance River, Ali and his team have spent the past three years monitoring 14 environmental sites, collecting samples of the water, and the plants and animals in the river, looking for traces of the water-borne bacteria. Contrary to prevailing expectations, the team has been isolating even more Vibrio cholerae bacteria from aquatic sites across Haiti.

“We have so many strains collected over the years [that we] simply cannot say that cholera is not present in Haiti’s aquatic reservoirs,” he says.

Ali’s research has far-reaching implications. The Haitian government has recently launched a US $2.2-billion, 10-year plan to eradicate cholera. If it turns out that cholera has become endemic, the coming fight may be even more difficult than expected.

“When cholera becomes endemic, when it has established its aquatic reservoir in a country, it is extremely difficult to eliminate. And our study is clearly finding that we are heading in that direction,” he says.

Correction: This story’s headline was updated for clarity.