The now-extinct great auk once ranged from Norway to Eastern Canada and from the southeastern United States to the Mediterranean. Photo by Bilwissedition Ltd. & Co. KG/Alamy Stock Photo

In 1844, six men set out from Iceland in a small rowboat. They were headed for Eldey, a low-lying bare rock about 15 kilometers off the southwest coast. Rare great auks—large, black-and-white, flightless seabirds—nested there and the men had been commissioned by a specimen dealer to get hold of any birds they could find.

Jumping ashore, they spotted a pair of the birds guarding an egg. In the ensuing chase, the two auks were killed and their egg was accidentally crushed. The men didn’t know it, but they had just killed the last great auks ever seen alive.

Back on the mainland, the hunters sold the carcasses. An apothecary in Reykjavik, Iceland, skinned the birds and preserved their organs in jars of whisky sealed with whale blubber.

One hundred and seventy years later, genetic researcher Jessica Thomas prised open the jars with a screwdriver. “It was quite a nice sweet smell, surprisingly,” she says. 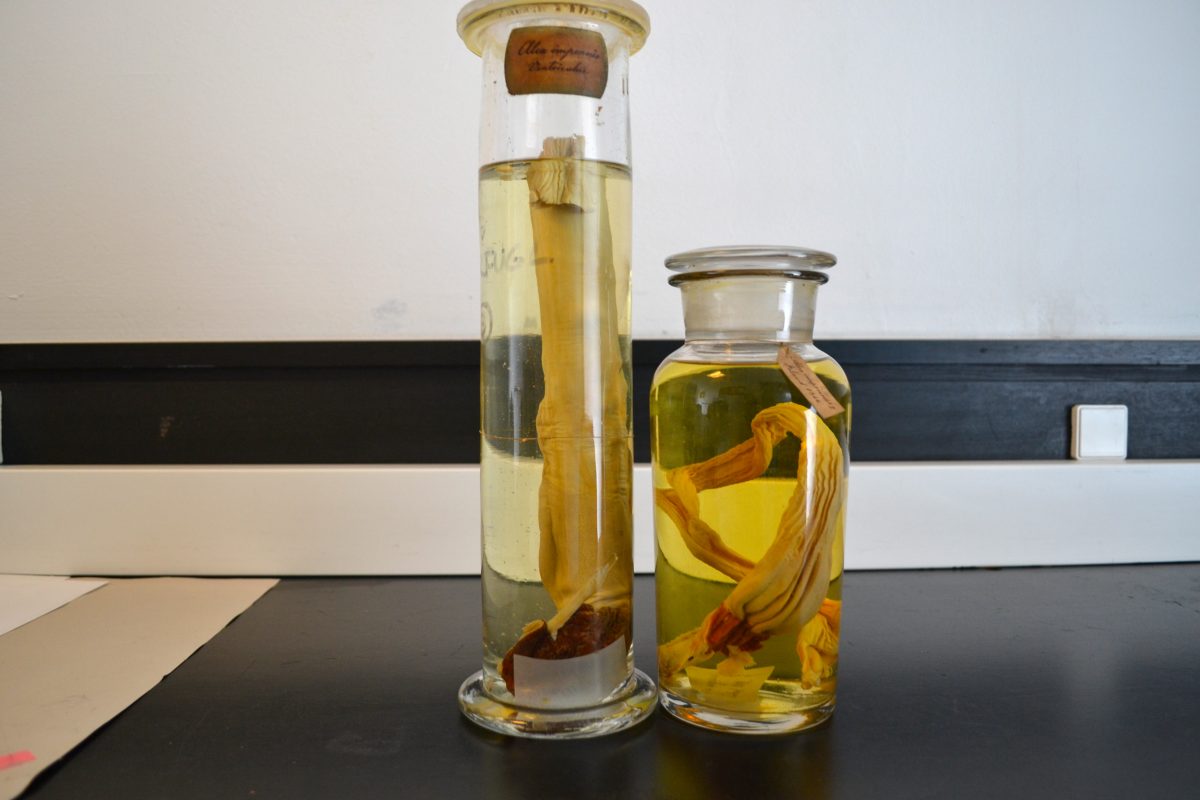 In 1844, two hunters were commissioned by a specimen dealer to collect great auks. The birds’ carcasses, by way of a middleman, wound up in the hands of an apothecary, who preserved their organs in whisky. Photo by J. Thomas

Thomas, a postdoctoral researcher at Swansea University in Wales, spent three years gathering genetic samples from great auks preserved in museums around the world, including samples from the jars of organs now held in the Natural History Museum of Denmark. Analyzing their DNA, she investigated whether the now-extinct species was already in decline, perhaps because of environmental change, before intensive harvesting polished it off, or whether human hunting alone drove the species that had once numbered in the millions into oblivion.

Thomas’s collecting took her to nearly a dozen museums from New York City, New York, to Bilbao, Spain. She sampled great auk material dating from 15,000 years ago to 1844, found across the species’ historical range from Sweden to Eastern Canada.

Wearing a full-body protective suit, face mask, and two pairs of gloves to avoid contaminating the sensitive samples, Thomas extracted the birds’ ancient mitochondrial DNA. Genetic material degrades over time, and not all the samples contained enough usable DNA. But the 41 full genomes she was able to extract were enough to unravel the mystery.

“There are a couple of different indicators of how a species looks genetically when it’s on its way out,” says study coauthor Michael Knapp, an ancient DNA specialist at the University of Otago in New Zealand. The great auk had none of those genetic signatures. 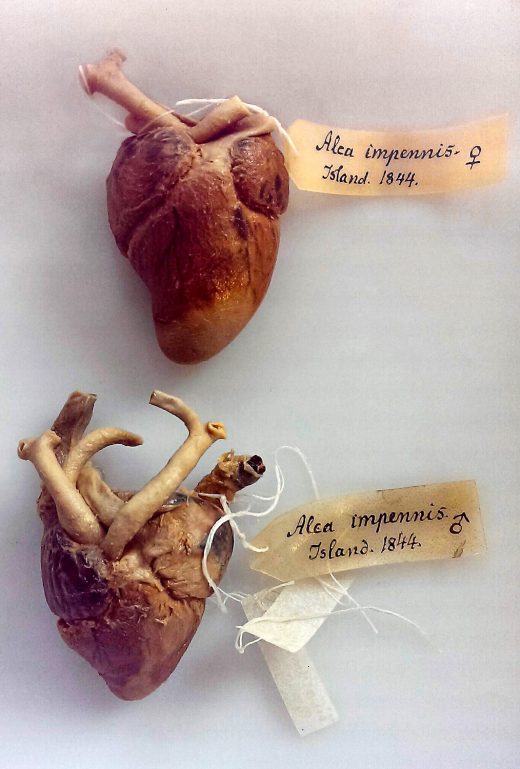 Species become vulnerable to extinction when their numbers shrink or if subpopulations become isolated and can no longer interbreed. Some scientists thought the great auk might have been separating into western and eastern populations, but there’s no evidence of that in the DNA, says Knapp. “Every auk anywhere across the range seems to have [had] the potential to breed with any other.” The samples also indicated high genetic diversity. The birds had likely retained a stable population for thousands of years before they suddenly blinked out.

“There was no indication they were in any way in decline,” Knapp says.

The data shows that great auks were numerous, resilient, healthy, and diverse—but even that wasn’t enough to save them.

“It just shows the intensity of hunting must have been extreme because there wasn’t, from what we could see, any other reason why they would go extinct,” says Thomas. “It wasn’t as though human hunting was the nail in the coffin.”

But could human hunters really have driven a healthy population to extinction? The researchers used computer modeling to simulate how intense this hunting pressure must have been to kill off the great auk in just 350 years—from when intensive hunting started around 1500 to the last birds’ demise in 1844. They found that harvesters collecting 210,000 birds and fewer than 26,000 eggs annually would have inevitably led to extinction. Historical reports suggest that the actual number of birds killed was likely far higher, Thomas says.

While great auks had been hunted at sustainable levels for thousands of years by Indigenous peoples, harvesting intensified dramatically when Europeans began visiting Newfoundland and Labrador.

“These birds are so fat it is marvellous,” wrote French explorer Jacques Cartier in 1534. “In less than half an hour we filled two boats full of them, as if they had been stones, so that besides them which we did not eat fresh, every ship did powder and salt five or six barrels full of them.”

European explorers, says Thomas, “had gone months without any fresh meat and they found these birds that were flightless, sitting on low-lying islands, and that weren’t really bothered by humans at all. They could literally guide them up gangplanks into their boats.”

If everyone aboard the 400 boats plying the region at the time harvested auks at the rate Cartier and his crew did, they’d only have to hunt for half an hour a year to reach 200,000 birds. 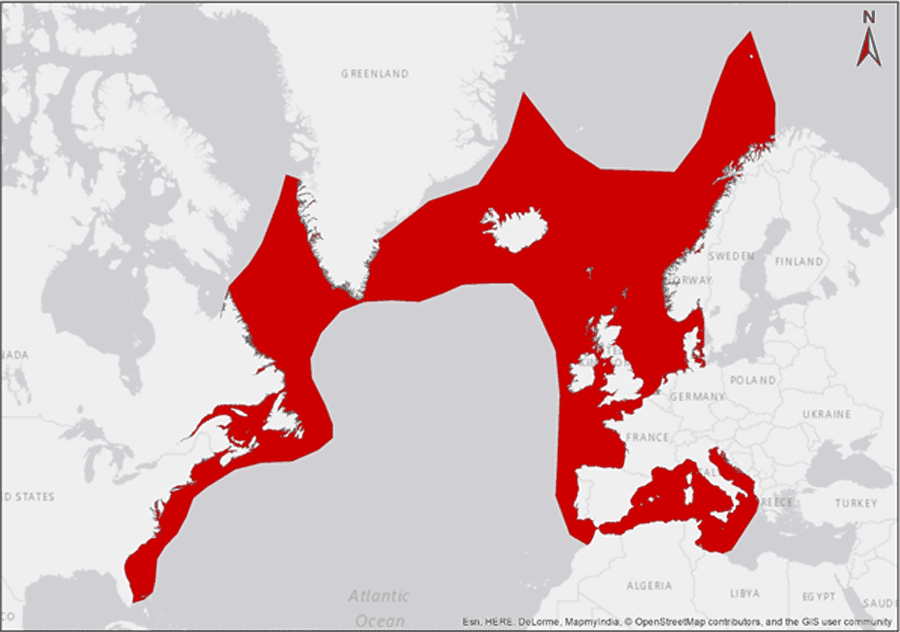 The historical range of the great auk. Map by BirdLife International/IUCN

In the following centuries, demand grew for their meat, eggs, and feathers—and the museum trade finished them off.

They were killed in gruesome ways. On Newfoundland and Labrador’s Funk Island, hunters corralled them into stone enclosures. Birds were burned alive to heat the water used to scald the feathers off more birds.

“If you come for their feathers you do not give yourself the trouble of killing them, but lay hold of one and pluck off the best of the Feathers,” wrote 18th-century observer Aaron Thomas. “Then you turn the poor Penguin adrift, with his skin half naked and torn off, to perish at his leasure.”

One of the last great auks in the United Kingdom was captured by villagers on Scotland’s Saint Kilda around 1840. None had been seen for a generation and the men kept the bird tied up in a stone hut. For three days, it squawked and tried to bite through the rope tied around its leg—then a storm blew in. The superstitious islanders decided the great auk must be a witch and stoned it to death. It took an hour for the bird to die.

“To see this quirky bird be lost in such a barbaric way—it’s a sad story,” says Thomas. “It was such an iconic species; it was the penguin of the north.”

The study is a reminder that abundance isn’t a protection against extinction, says Nicolas Dussex, a conservation geneticist at the Swedish Museum of Natural History who was not involved in the research.

“In conservation biology, there’s a rule: that if a species is below 500 individuals, it’s doomed to extinction,” Dussex says. “That kind of shortcut is quite dangerous and the great auk is a great example of that. There were millions of them and still they went extinct.”