On a remote island off the Chilean coast, fur seal pups are facing unanticipated repercussions of climate change—overburdened mothers and deadlier hookworm infestations.

Mauricio Seguel, a veterinarian at the University of Georgia, has studied a colony of fur seals on Guafo Island since 2005, when he was a student in Chile. The hookworm problem itself isn’t new: the parasites have always been the most common cause of pup mortality on Guafo Island and are known to cause up to 70 percent of pup deaths in other regions. The blood-feeding parasites have evolved to be particularly deadly to the seals: they time the release of their eggs into the sand so they hatch during fur seal breeding season, the one time of year these animals congregate on land.

During his 13 years studying on Guafo Island, Seguel noticed a pattern: in years when the seas were warmer, more pups died. When he looked closer, he saw that for each degree Celsius increase, there was a 10 percent bump in the number of pups that died. In the warmest year, 42 percent of the pups succumbed.

Warmer waters produce less phytoplankton, which sustains the squid, fish, and other animals that the seals feed on. With less prey available, mother seals have to spend more time hunting for food and forage farther from shore, reducing the time they can spend caring for and feeding their pups. The underfed pups have weaker immune systems and are more susceptible to hookworms, Seguel reports.

Climate change is expected to exacerbate such effects. Since 1970, average sea surface temperatures have risen by about 0.5 to 1 °C globally, with the southern oceans warming faster than the northern ones. That warming will have complex repercussions, says Seguel. 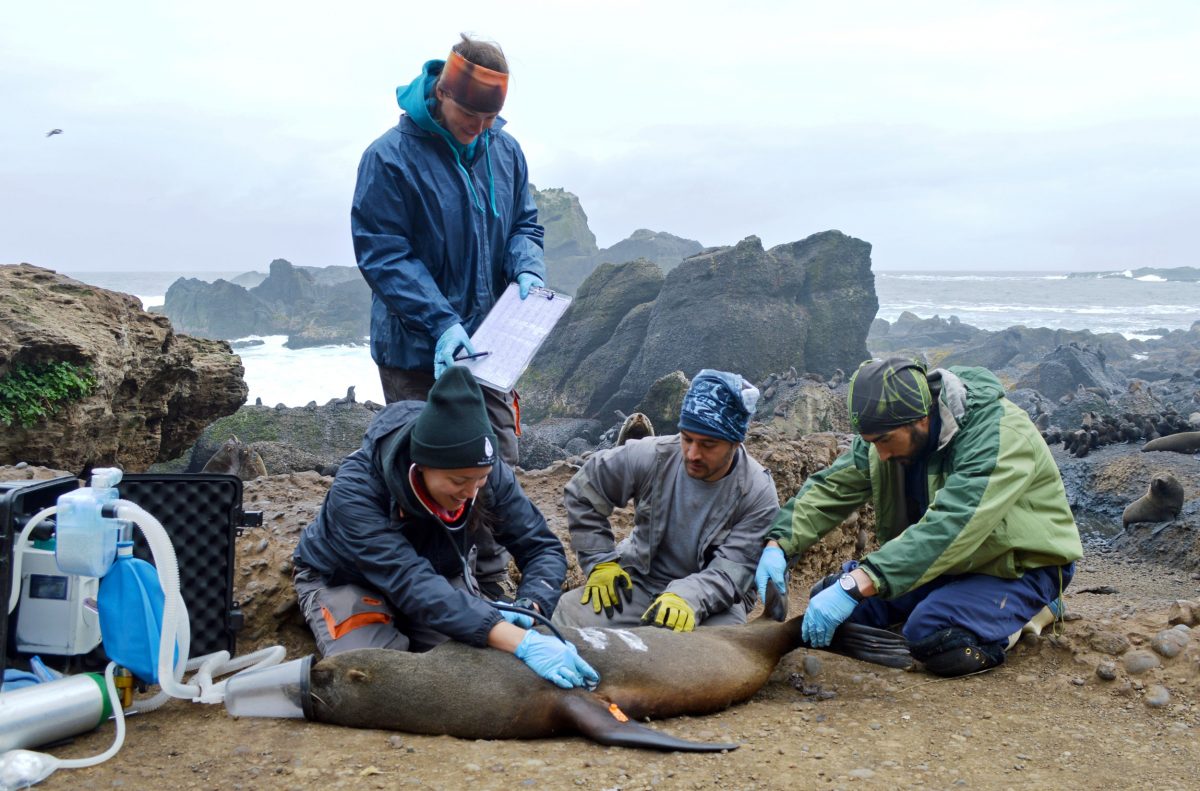 On Guafo Island, Chile, researchers Lorraine Barbosa, Josefina Gutiérrez, Eugene DeRango, and Mauricio Seguel assess the condition of an adult female fur seal and add a tag and markings so she can be tracked. Photo by Diego Perez-Venegas

“Climate warming is not the simple thing people think it is,” says Pádraig Duignan, chief research pathologist at the Marine Mammal Center in Sausalito, California. “It’s a multitude of things that are incredibly complex and it’s going to affect every place differently.” Seguel’s study demonstrates just how vulnerable marine mammal populations can be to impacts on their food at vital places like breeding sites, Duignan says.

The seals on Guafo Island aren’t the only animals that suffer from diseases made worse by warming waters. According to Robert DeLong, marine mammal biologist at the Alaska Fisheries Science Center in Seattle, Washington, the warm waters that come with El Niño increase the number of infections caused by the bacterium Leptospira in California sea lions, a pattern observed since the 1980s, for example. “We are in the midst of a very strong outbreak right now,” he says. The exact reason is still unknown.

As the ocean continues to warm, the warmest years that today strike once every 10 or 20 years will probably start to happen every other year, says Seguel. “The heating of the waters in this part of the planet is putting pressure on these animals that they didn’t face before.”