A great white shark swims off the coast of Mexico. Photo by Corbis

Forty years ago, moviegoers were transported to a fictional New England town and warned not to get in the water. When Jaws opened in the theaters on June 20, 1975, it was an immediate hit, even among people who knew better. George Burgess, then an oceanography graduate student at the University of North Carolina, went to see the movie with classmates.

“We were chuckling quite a bit while other people were screaming,” says Burgess, now a shark biologist at the University of Florida in Gainesville.

Of course, even in 1975 researchers knew that white sharks were not homicidal creatures inclined to hold a grudge. But, in general, white sharks were not well understood when Jaws was released. Advances in DNA science, genetics, and tagging technology have since filled in some of the blind spots. This new knowledge has not only helped upend white sharks’ damaged public image, but has even changed some of the ideas that Burgess and other shark scientists held at the time.

Burgess says we now know that white sharks are “swimming sensory machines.” While their sight isn’t particularly good, and their hearing is only as good as a human’s, sharks can smell and taste incredibly well. And they also have a sense that humans don’t. Discovered in the 1980s, sharks use special organs in their snout to sense electromagnetic fields, which they use to hunt and detect changes in pressure and temperature. 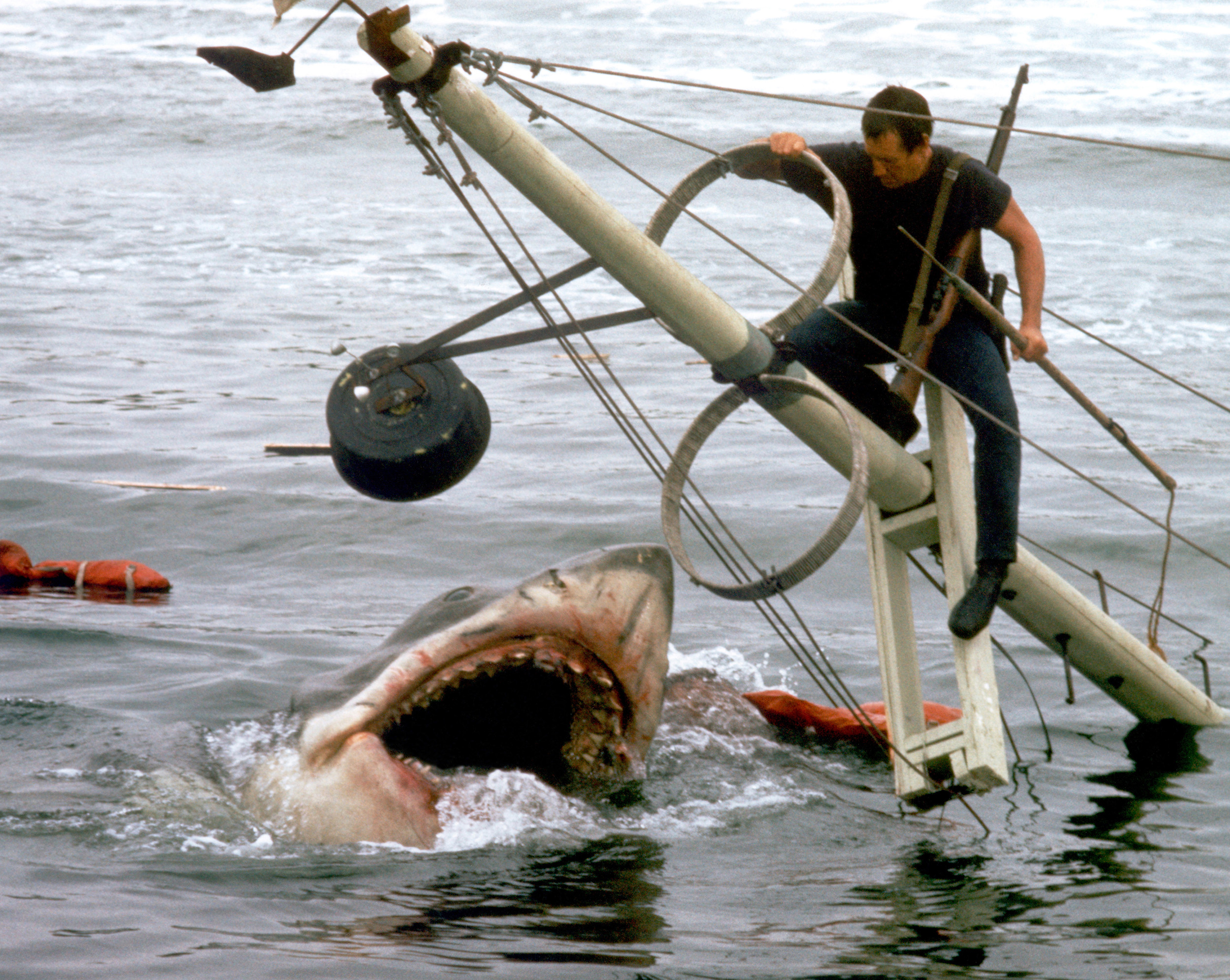 Roy Scheider on the set of Jaws. Photo by Sunset Boulevard/Corbis

Another important discovery made since the days of Jaws was a clearer picture of white sharks’ life histories. It takes them eight to ten years to reach sexual maturity, and a further 12 to 18 months gestation to give birth. White sharks also have around a one-year resting period before they’re able to get pregnant again.

Before the details of shark reproduction were understood, the animals were seen as an abundant food source. “We were promoting sharks as [an] untapped [source of] protein for the starving world,” says Burgess.

Despite this discovery, sharks have remained a popular source of food—particularly as shark fin soup in China. A 2013 study estimated that 97 million sharks were killed in 2010, many just for their fins. Shark “finning” made a huge impact on Peter Benchley, author of the novel on which Jaws was based. During a dive in Costa Rica in the 1980s, Benchley was so shocked to see the ocean floor covered in finned sharks that he became an advocate for sharks until his death in 2006.

The past 40 years have also seen some good news for these formidable creatures. White sharks have benefited from American and Canadian marine protection laws, which boosted populations of their prey. In 1997, a US federal law banned the hunting of white sharks in some areas. As a result, white shark numbers off the east coast of the United States have rebounded from the population declines seen in the 1970s and 80s.

White sharks have also been getting a needed public relations boost. One campaign by OCEARCH, a nonprofit organization that funds shark research, put the locations of GPS-tagged sharks on a map, giving people a way to follow their movements. “It’s given the sharks a voice,” says Chris Fischer, the founder of OCEARCH.

In some cases, these sharks even get an actual “voice” on social media. Fans have created Twitter accounts for some of those tagged sharks, including Mary Lee, a white shark tagged by OCEARCH and named for Fischer’s mother that now has more than 75,000 followers on Twitter. OCEARCH’s project shows just how much the public perception of white sharks has changed since Jaws first warned them not to get in the water.

“People are tweeting ‘Mary Lee come back to North Carolina, no, come to New Jersey,’” Fischer says. “You didn’t used to hear things like that.”