As the Douglas DC-3 soared above the Pacific Ocean en route to Japan from Indonesia, Tomoyuki Tanaka was deep in thought. The film producer’s latest movie project had just fizzled and he needed another idea for his bosses at Toho Pictures Inc. But what? RKO Pictures in Hollywood had rereleased its 1933 classic King Kong two years earlier, in 1952, and it was again a hit. Another monster movie, The Beast from 20,000 Fathoms, was a blockbuster for Warner Bros. Pictures in 1953. Audiences loved this genre. Tanaka needed a monster, a big monster.

Tanaka’s gigantic creature, however, would be uniquely Japanese from its inception right through to the latest movie, Shin Gojira (Godzilla Resurgence), released in Japan in July. So far, it’s the third-highest grossing film in Japan this year. North Americans can weigh in on Godzilla’s latest antics at select theaters until October 18. The limited release—it premiered in North America October 11—may reflect what Toho Pictures has always known: original, Japanese-produced Godzilla movies resonate most with domestic audiences, not foreign ones. After all, Japan is an island culture defined by the sea around it.

“Godzilla is very much caught up in the Japanese conception of themselves as island dwellers,” Tsutsui says. “If you ask a Japanese person to tell you about their nation, the first thing they will say is: ‘Japan is an island.’” This is a salient detail. For island cultures, the sea’s embrace is at once comforting and dangerous. An island is isolated, yet accessible; cloistered, yet easily violated. Islands are vulnerable to invaders of all kinds. 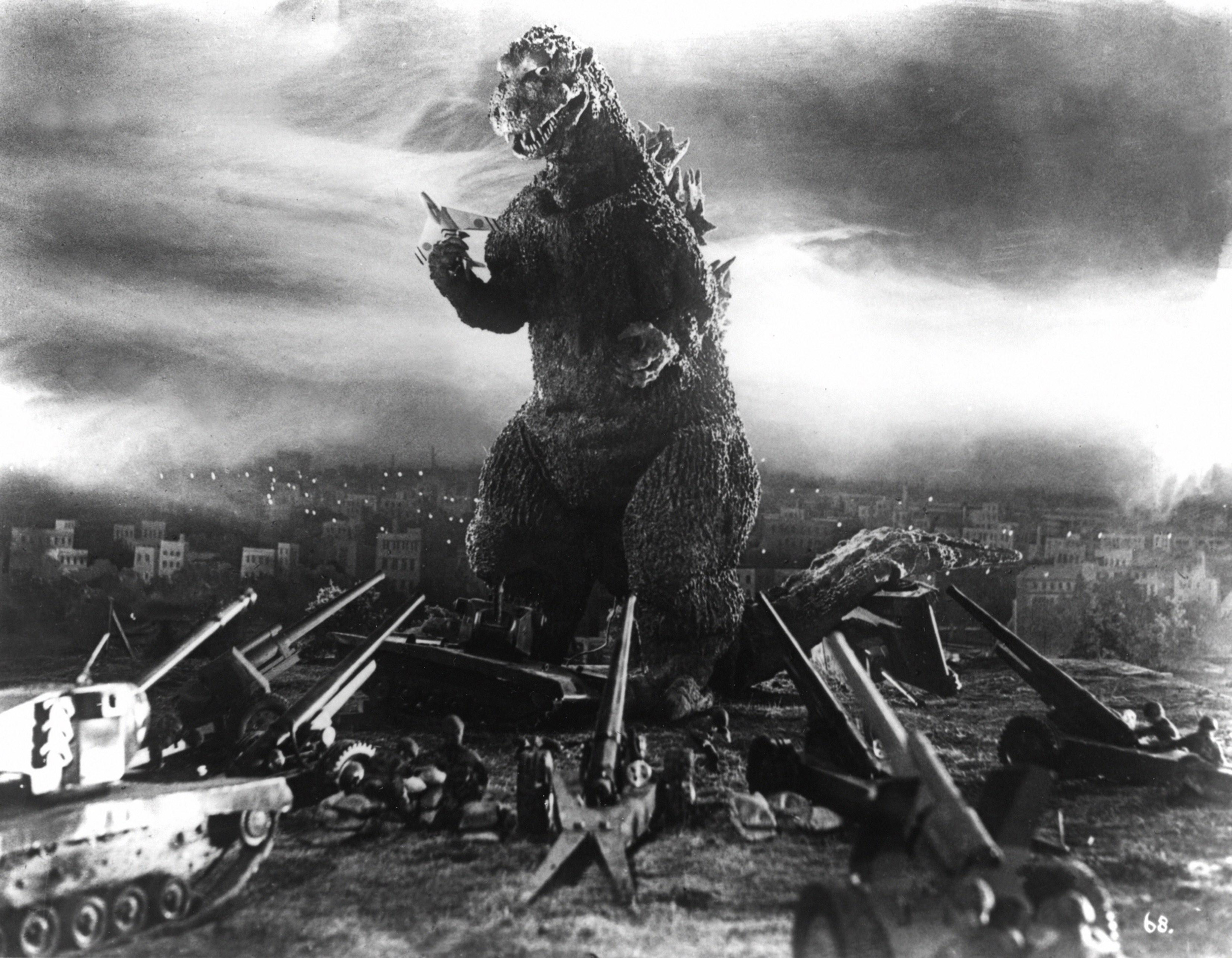 More than one-third of the 62-million yen budget for the 1954 Godzilla film went to special effects. Photo by Photos 12/Alamy Stock Photo

In the 1954 original, Godzilla lives somewhere under the sea, temporally and spatially isolated from the world—confined to his own self-sustaining island. That is, until a hydrogen bomb flings him into the modern world, much like the atomic bombing during the Second World War flung the Japanese into a nuclear world no other people on Earth have visited. The team that worked on Godzilla saw the monster as an analogy for humankind’s arrogance, and for the fear of nuclear bombs. It was a political and dark film.

After the war, Japan’s vulnerability intensified. The island nation was a close witness to the cold war between Soviet Union and the United States, nuclear superpowers locked in a cold war, flexing their muscles by lobbing hydrogen bombs into the atmosphere, into the water, or onto uninhabited islands in the South Pacific. The 1954 Castle Bravo nuclear test on Bikini Atoll became—and still is—the largest nuclear detonation by the US government. The explosion was so large that the fallout escaped the safety zone and rained on the Japanese fishing trawler Lucky Dragon No. 5, sickening 23 crew members with radiation poisoning.

The American public was unaware of the incident. For the Japanese, it was front-page news. And when contaminated tuna hit the market, people really freaked out—they stopped eating tuna. “Taking tuna away from the Japanese is like taking deep-fried carbs away from Americans,” Tsutsui says. “A good scare will keep [them] off for a while but not too long.”

Tanaka, the movie producer, pondering the money-making genius of American monster movies, saw a post-war opportunity to create an iconic Japanese monster, born of a nuclear test gone awry. Who better than the Japanese to contemplate the repercussions of splitting atoms? Toho Pictures agreed.

Gojira (ゴジラ), the character’s name in Japan, is a portmanteau of gorilla and kujira, the Japanese word for whale. (The movie studio’s foreign sales department anglicized the name to Godzilla when they sold it to American distributors.) When it was released in Japan, Godzilla was a respectable top 10 hit and broke opening day ticket sales in Tokyo.

In the decades since Godzilla’s birth, the only known monster with atomic breath, he became more than what Tanaka could have imagined back in 1954: a Japanese cultural icon, spawning an entire movie genre called kaiju (strange beast), and another 28 films in the franchise.

Godzilla is beloved in Japan. Everyone’s favorite monster is everywhere: he promotes products, he’s a mascot for soccer teams, and he even has his own Japanese postage stamp. The movies have seen the character evolve from destructive force of nature, to benevolent protector, to comedic wrestler, and back again, in a cycle that shadows Japan’s cultural feelings about itself, its defense forces, its nuclear fears, its politics.

More information may spoil the plot, but Tsutsui calls the ending optimistic—Godzilla gifting the Japanese people an opportunity to create a new nation. And just like in 1954, when Godzilla’s work is done and he needs a rest, he slips back into Tokyo Bay.