Scientists look down at a river of meltwater flowing from southern Greenland. Photo by Justine Evans/Alamy Stock Photo

In the North Atlantic, east of North America and south of Greenland, the ocean’s upper layers are much warmer than one might presume given the extreme latitude. This unexpected warmth is a product of the Atlantic Meridional Overturning Circulation (AMOC), a vitally important system of ocean currents that moves warm salty water northward from the tropics and cold fresher water south. The AMOC looms large in the Earth’s climate: it is responsible for redistributing nutrients throughout the Atlantic Ocean and is a major driving force controlling the climate on both sides of the pond.

Ocean currents all experience fluctuations, which can dramatically change the distribution of nutrients, heat, and fish. The best known example is probably the El Niño-Southern Oscillation, in which unusually warm water occasionally disrupts the Pacific Ocean’s Humboldt Current that flows north from Chile toward Peru. El Niño events can shift the jet stream south, cause excessive rainfall and devastating floods, and temporarily collapse fish stocks.

To date, most climate research suggests that the AMOC is relatively stable and carries water throughout the ocean in a reliable, repeating cycle. But anthropogenic climate change seems to have made the current weaken slightly, raising the question of whether more dramatic shifts are in store. As of the most recent Intergovernmental Panel on Climate Change report, a shutdown of the circulation from further warming is considered unlikely. Yet a new study says that the unprecedented melting of Greenland’s massive ice sheets, previously overlooked in most climate modeling, will result in the AMOC weakening, and maybe even collapsing, within the next 300 years. 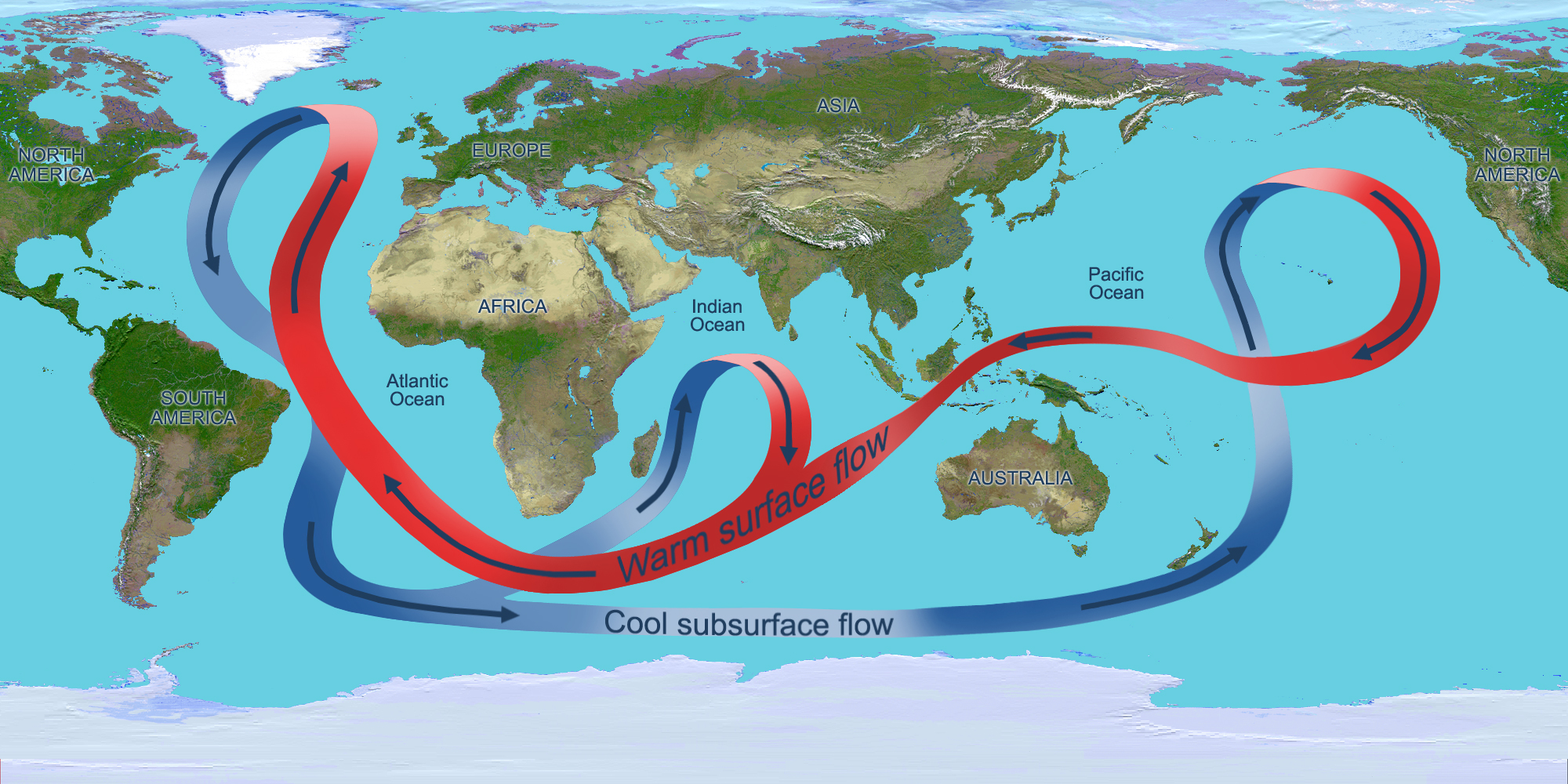 The Atlantic Meridional Overturning Circulation (AMOC) is one part of the larger global thermohaline circulation. The circulation is powered by regional differences in the temperature and salinity of the ocean, with water flowing to try to balance out these difference. A large addition of cold fresh water from melting Greenland ice sheets to the warm salty surface water typically found in the North Atlantic would cancel out some of these differences, weakening the strength of the circulation. Photo by NASA

“It’s been often stated that Greenland melt could be very devastating for the AMOC, but no one has really looked at it in a systematic way,” says Pepijn Bakker, a climate scientist at the University of Bremen in Germany and author of the n​ew study.

So Bakker teamed up with ice sheet modelers and others to calculate how the AMOC would respond to Greenland melting under a number of different emissions scenarios.

In one scenario, Bakker calculated what would happen if anthropogenic carbon dioxide emissions peak around the year 2040 and then decline. In that situation, the AMOC weakens by about 18 percent, but does not collapse.

In another scenario, carbon emissions continue to rise at their current pace throughout the next century. If this happens, the AMOC has a 44 percent chance of collapsing entirely by 2300, he says. The research hints at some of the hugely negative consequences that could lie in wait if humanity chooses to do nothing to mitigate climate change.

Like a sudden drop in blood pressure, a weakening or shutdown of the AMOC could cut off vast swaths of the ocean from a vital supply of heat and nutrients. Much of the planet could experience wild changes in temperature and productivity, altering entire ecosystems.

Conversely, Bakker says the study suggests that if humans take action to limit greenhouse gas emissions, the AMOC should survive.

The effect of Greenland ice melt has not been widely included in previous studies of the AMOC because ice melt predictions are generally not included in climate models.

Even today’s most sophisticated climate simulations can’t account for all of the potential complexities of ice sheets. Some have their own river systems or particular microclimates, for instance, and the ways in which the ice interacts with warm and cold ocean waters is not well understood.

The only way to include Greenland ice melt (as well as Antarctic ice melt) in climate models is to make assumptions about the rates at which the ice sheets are melting, says Michael Mann, a climate scientist at Pennsylvania State University who studies the AMOC and was not involved in the new work. Mann says Bakker’s predictions of this fresh water influx are more realistic than previous estimates of an AMOC shutdown, most notably those made in a paper published earlier this year by former NASA climate scientist James Hansen.

Also complicating matters: scientists don’t fully understand the AMOC itself and how it might respond to not only an influx of fresh water, but also to shifting winds, rising sea levels, and changes in atmospheric and ocean temperatures.

Notably, Bakker’s calculations of how much AMOC-suppressing meltwater could flow into the North Atlantic were more conservative than some previous estimates, including Hansen’s widely reported paper. Hansen’s group projected massive freshwater runoff from Greenland and a catastrophic collapse of the AMOC. That paper also predicted violent superstorms, mega-waves throwing massive boulders onto shorelines, and a stratification of the ocean with cold water on top and warm water on the bottom.

Bakker says he thinks Hansen’s paper was unrealistic, but adds that a collapse in the AMOC would have devastating consequences. Sediment cores drilled from Greenland and Antarctica show that during the last ice age, the AMOC weakened suddenly and dramatically, nearly to the point of collapse, just before periods of wild climate change in the northern and southern hemispheres.

“It definitely cools Europe, which perhaps combined with global warming is not such a bad thing, some would argue,” Bakker says. “It would reduce warming in the North Atlantic region and over Europe. But it would also change many other things: the rain belts over Africa and Central America would shift. The ocean circulation itself impacts all the biology that lives in there. I’m not sure if we really know all the consequences of such things.”